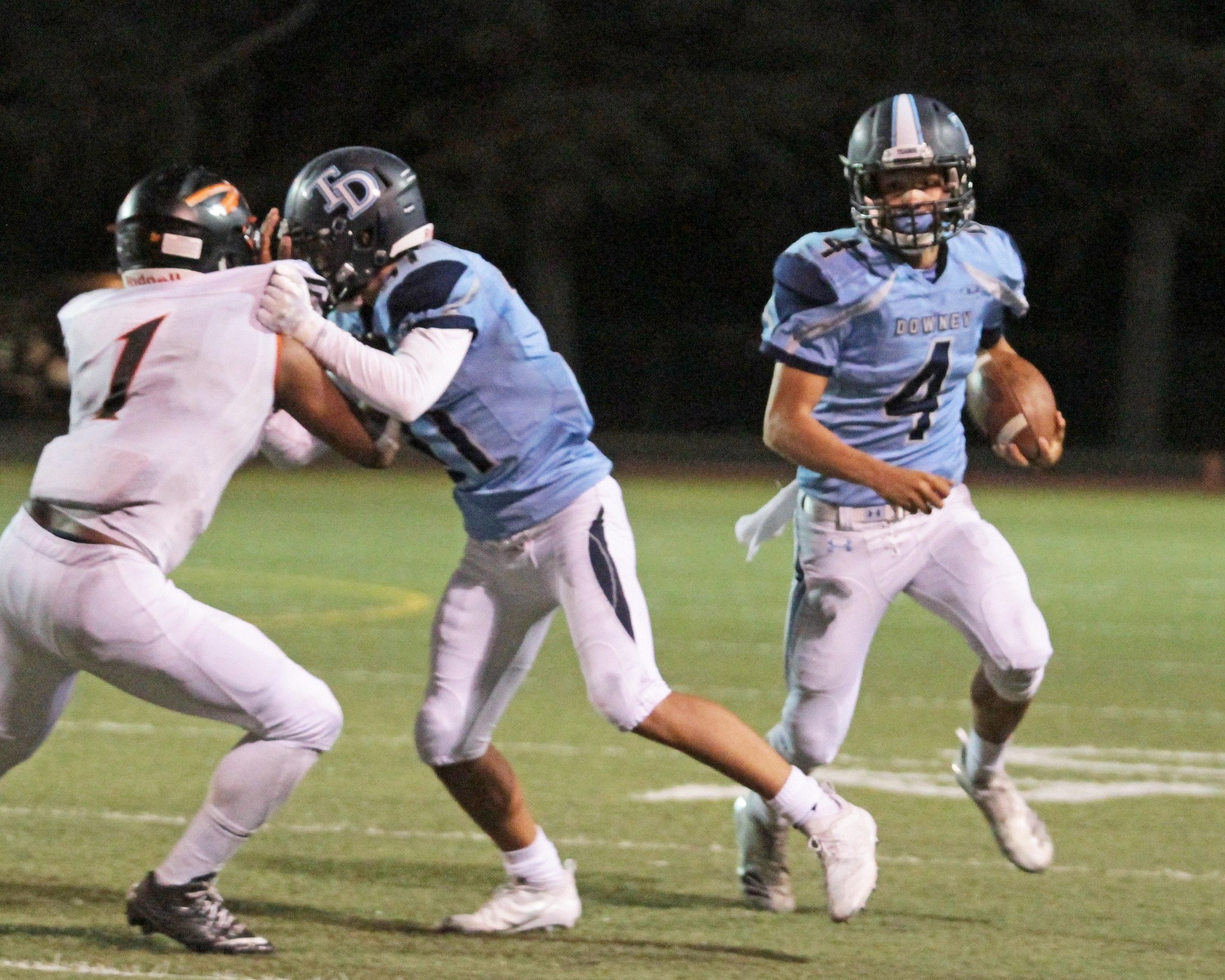 Downey's Bryce Peterson gets a block and runs up field during a non-conference game with McClymonds of the Oakland Section on Sept. 14, 2018. (Dan Harris Photography)

1. (1) Central Catholic (4-1, 1-0): As long as Dawaiian McNeely stays healthy it won’t matter who the Raiders start at quarterback. The running back with a scholarship offers from Louisiana on west rushed for a season-high 215 yards in Central Catholic’s 35-28 victory over Manteca. Next: at Sierra.‍

‍3. (3) Pitman (5-0, 0-0): The Pride pitched a shutout in their final tune-up for Central California Athletic League play, pinning a 42-0 defeat on struggling Summerville. Next: Bye.

‍4. (4) Downey (3-2, 0-0): The Knights may have lost more than a game to McClymonds, a defending CIF State Bowl champion. Freshman quarterback Beau Green has AC joint pain his shoulder, according to The Modesto Bee, and could miss up to three weeks. Next: Bye.

5. (5) Turlock (2-3, 0-0): The Bulldogs have lost two straight and are 0-3 on the road after a loss to the top team in the Fresno area — Central — but the Bulldogs are rewarded for taking on one of the toughest non-conference schedules. Regardless of record, Turlock is one of the top teams in the region. Next: Bye.‍

6. (6) Oakdale (4-1, 1-0): Zeke Saffar and Max Moore each ran for more than 190 yards as the Mustangs survived a scare from East Union in their Valley Oak League opener. Next: vs. Weston Ranch.‍

7. (7) Buhach Colony (4-1, 1-0): The Thunder knocked Patterson out of the top-10 with a convincing 65-21 victory in their Central California Conference opener, rushing for eight touchdowns. The Thunder have won three straight games. Next: Bye.‍

8. (9) Modesto (3-1, 0-0): Defensively, the Panthers intercepted three passes in a 56-20 victory at Franklin, fueling an offense that has averaged 49 points over its last three games — all victories. Next: vs. Stagg (at Downey).‍

9. (8) Manteca (2-3, 0-1): Quarterback Ryan Ward and the Buffaloes picked on Central Catholic’s depleted secondary and nearly escaped David Patton Field with their first-ever victory over the Raiders. Next: Bye.‍

10. (nr) Gregori (3-2, 0-0): Isaac Herman scored a pair of rushing touchdowns and answered Weston Ranch’s only touchdown with an 85-yard kickoff return as Gregori climbed back into the top-10 with its third straight victory. Next: Bye.‍