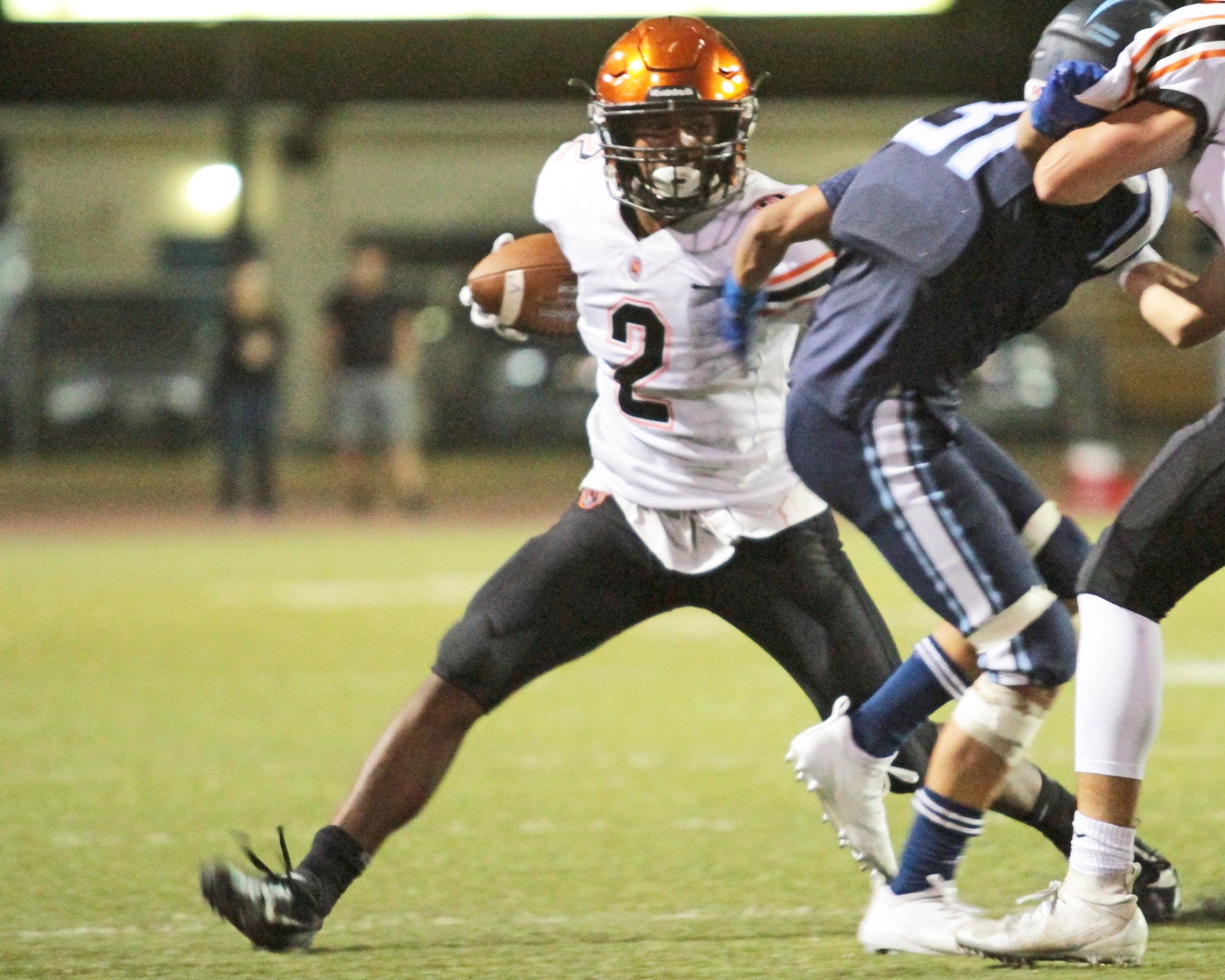 Xavier Stewart and No. 3 Merced are on the move in this week's large-school ranking. The Bears upset former No. 2 Downey in a offensive showcase. (Dan Harris)

They've been realigned into different leagues, but the Turlock and Merced rivalry lives on, even if they're no longer playing for Central California Conference titles.

The Bulldogs captured the last two CCC crowns, but were moved into the new Central California Athletic League this fall by the section's realignment committee. The change cleared the way for Merced, a conference heavyweight since the aughts, to return to its throne in the CCC.

While that may be true, the longtime rivals still find themselves battling for headline space and elbow room atop this week's large-school ranking. Turlock climbed to No. 2 after beating Tracy in the Battle for Dog Bone, but that slot was created by Merced, which edged former No. 2 Downey in the Chicken Ranch Casino Game of the Week. With the win, the Bears vaulted to No. 3, nipping at the Bulldogs' heels.

Here's a closer look at this week's large-school top-10 rankings:

1. (1) Central Catholic (2-1) — The Raiders made celebrated their home debut with a 33-20 win over Holy Bowl rival St. Mary’s. Central Catholic pounded the Rams into submission, turning exclusively to the run in the decisive second half. Next: vs. Lincoln of Stockton.

2. (3) Turlock (2-1) — Since a sloppy season-opener at Freedom of Oakley, the Bulldogs have been unstoppable. San Diego State-bound defensive end Garrett Fountain and Turlock reclaimed the Dog Bone with a victory over Tracy, one of the top scoring offenses in the Sac-Joaquin Section. Next: at Sheldon.

3. (5) Merced (3-0) — The Bears are averaging 47 points per game and look every bit the part of a Central California Conference and section title contender after wins over Del Campo, Gregori and Downey.  Coach Rob Scheidt is mixing his quarterbacks based on feel, and right now, the feeling on the Bears’ sideline is optimistic. Next: vs. Madera.

4. (6) Pitman (3-0) — The Pride are knocking out the opposition with a prolific 1-2 punch. Jakob Partida has rushed for 100 or more yards in two straight games and Payton Bass highlighted a win at Pleasant Grove with 235 yards of total offense and three TDs. Next: vs. Bullard.

5. (2) Downey (2-1) — The Knights fall back in the rankings, but remain a contender in the Central California Athletic League. There is no question Downey’s “Air Raid” offense can light up the scoreboard, but the defense has yielded 89 points in the last two games. Next: at Johansen.

6. (7) Oakdale (2-1) — After a near-perfect victory over Sonora to start the season, the Mustangs, a team with 22 new starters, have been searching for that same punch. Oakdale won decisively at El Capitan, but the first-half performance is concerning. The Mustangs and Gauchos were tied 6-6. Next: vs. Chaparral (Colo.).

7. (8) Buhach Colony (2-1) — A traditional run-heavy program with its “Fly” offense, Buhach Colony devastated Edison with more of a balanced attack. The Thunder rushed for 288 yards, but kept the Vikings off-balanced with 181 yards on 11-of-15 passing. Next: vs. Weston Ranch.

8. (4) Manteca (1-2) — The Buffaloes have lost consecutive games for the first time since 2012, and with Tracy and Central Catholic looming, there could be more trouble ahead. Running back Trabron Russell has a high ankle sprain and is questionable for Friday’s clash. Next: vs. Tracy.

9. (9) Patterson (2-1) — Coach Rob Cozart is excited about his young team’s resiliency and ability to learn from its setbacks, such as a loss at Sacramento private-school power Capital Christian. The Tigers returned home and throttled  former Western Athletic Conference rival Los Banos last week, and look forward to Friday’s track meet with Modesto. Next: vs. Modesto.