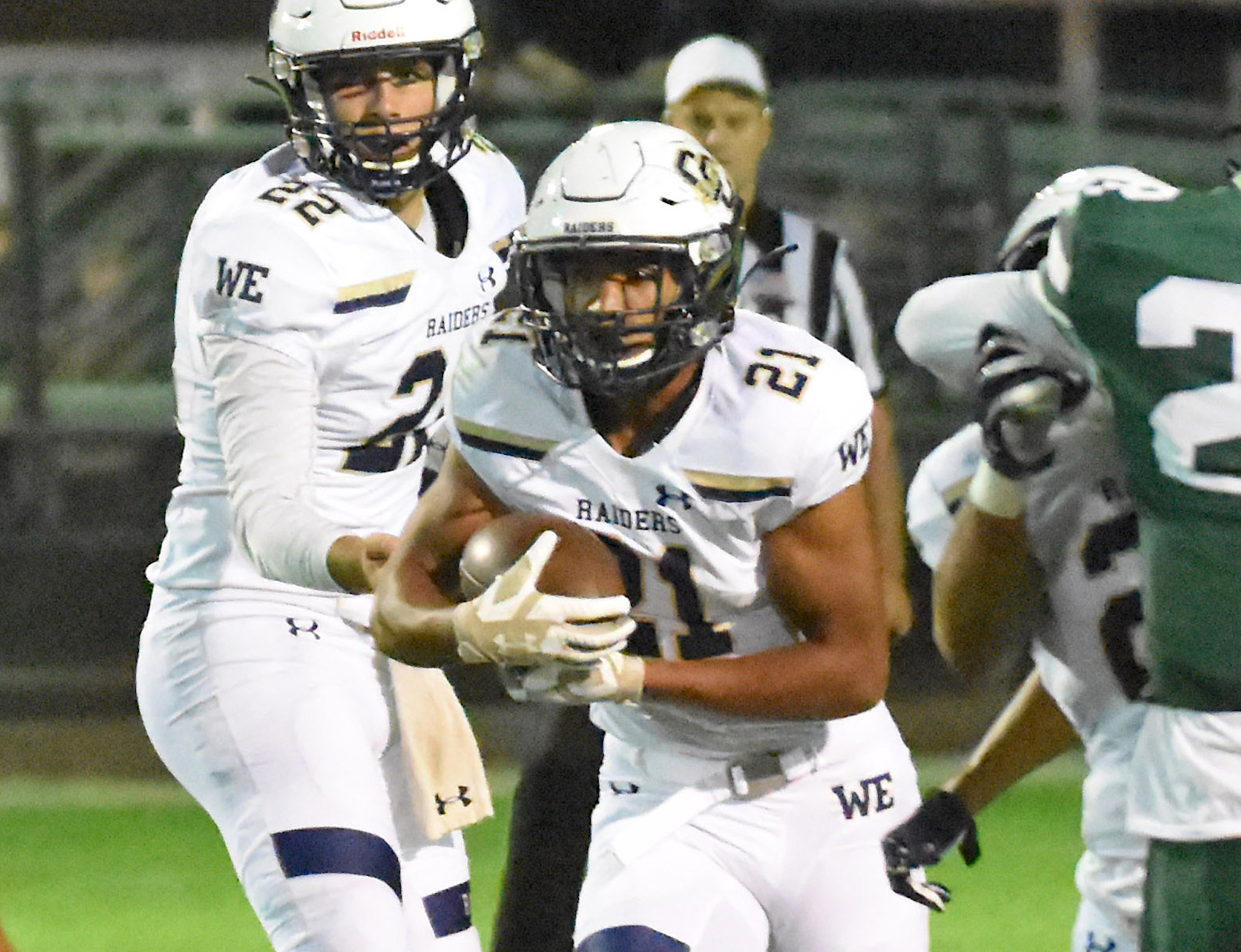 Central Catholic running back Minaya Olivo was instrumental in the Raiders' first win of the season, a down-to-the-wire finish over the Manteca Buffaloes. (Kevin Zimmerman)

VOL teams on rise, but still chasing Turlock and Buhach in large-school poll

1. (1) Turlock (3-2, 0-0): The Bulldogs aren’t penalized for playing one of the region’s toughest schedule, including last week’s loss to Central of Fresno, the top-ranked team in the Central Section. The Bulldogs have two weeks to prepare for their Central California Athletic League opener against sixth-ranked Downey. Friday: Bye.

2. (2) Buhach Colony (5-0, 1-0): Cal-bound senior Trey Paster scored three touchdowns, including two through the air as the Thunder rolled over a chief threat in the Central California Conference. Friday: Bye.

3. (4) Oakdale (3-2, 1-0): Mustang coach Trent Merzon notched his 200th career victory with a 42-14 win over East Union to start the Valley Oak League. Leading the charge was first-year quarterback Jackson Holt, who was 7 of 10 for 186 yards and three TDs. Friday: at Weston Ranch.

5. (3) Manteca (3-2, 0-1): The Buffaloes outgained the Raiders in a 27-26 loss, but can point to two empty red zone trips, 11 penalties and a blocked extra-point kick as the culprits in their fifth consecutive loss to Central Catholic. Friday: Bye.

6. (4) Downey (3-2, 0-0): The Knights were blown out for the second straight week, losing to McClymonds of Oakland 55-6. Downey’s high-octane offense was limited to six points and none over the final three quarters. Friday: Bye.

7. (8) Sierra (5-0, 1-0): Junior Kimoni Stanley continued his strong start with 157 yards on just 12 carries as the Timberwolves celebrated homecoming with a resounding win over Kimball. Stanley topped the 100-yard mark in the first quarter. Friday: at Central Catholic.

8. (7) Patterson (3-2, 0-1): The Tigers fall one spot after losing to Buhach Colony in their Central California Conference opener under the palms. Patterson struggled with the Thunder’s depth and physicality. Friday: at Golden Valley.

10. (nr) Davis (4-0, 1-0): The Spartans won their fourth consecutive game to start the season with a 48-27 victory over Mountain House, a reigning Western Athletic Conference champion, in their league opener. Quarterback Elijah Davis rushed for 246 yards and totaled five touchdowns for the second week in a row. Friday: vs. Los Banos (at Modesto JC).