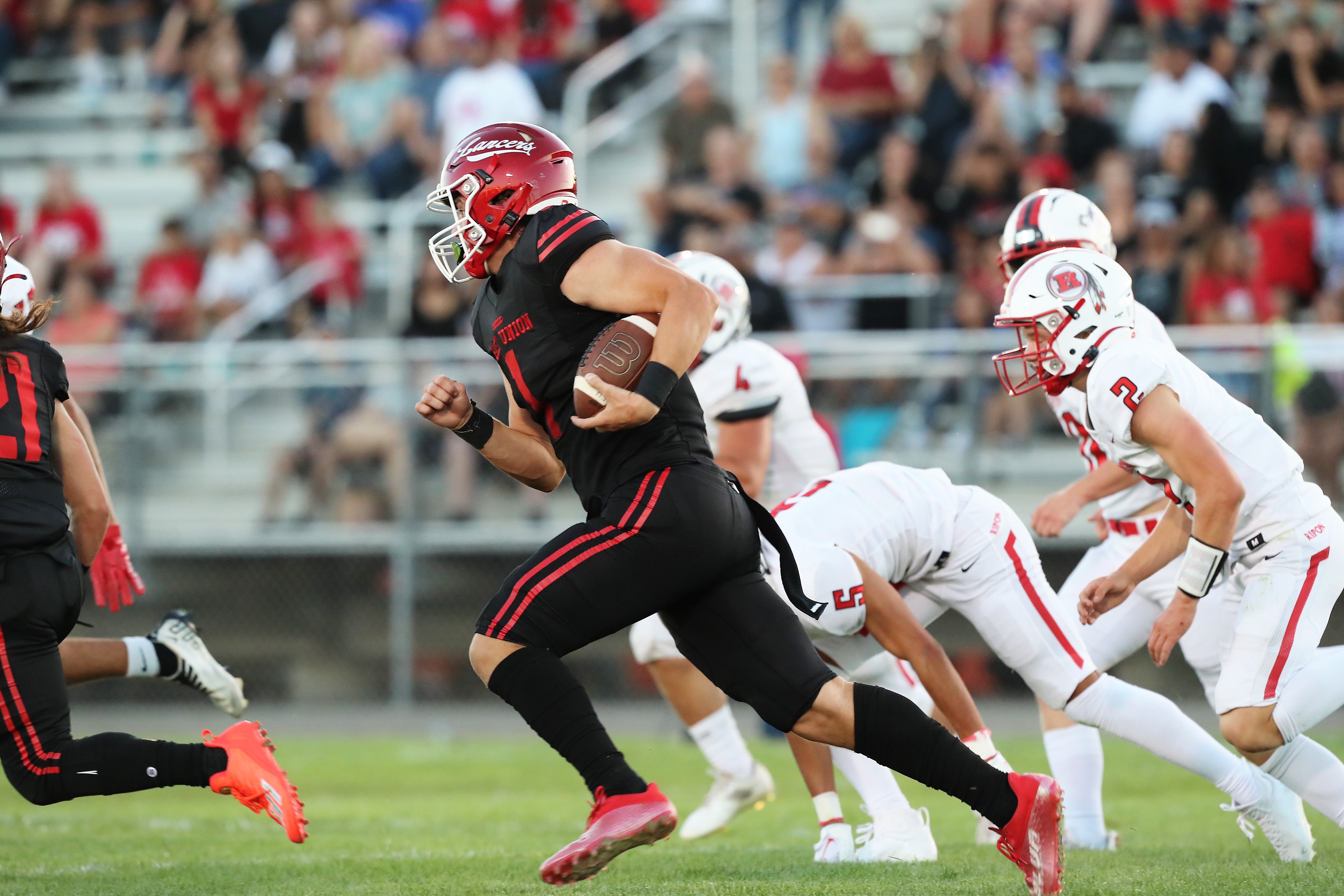 East Union's Dylan Lee, a record-setting wide receivers a season ago, switched under center and guided the Lancers to a 28-14 victory over Ripon on Friday, Aug. 20, 2022. (Sean Kahler)

Leaning on Lee: East Union's dynamo takes over late as Lancers pull away

It had been a soap opera for him with position changes galore but, in the end, the skilled East Union senior stamped his name in capital letters on the Lancers’ hard-earned 28-14 victory over Ripon at Dino Cunial Field.

Put it this way: If Lee needed to pass for a touchdown, he threw it. If the pass needed to be caught, he caught it. And when it was time for he and his teammates to win in the fourth quarter, they won it.

“I can’t really pick (between receiver and quarterback),” Lee assessed. “Whatever we gotta do … I wanna win. That’s all I want to do.”

Lee, a sturdy  6-foot-2 and 215 pounds, still favors the ankle he injured during summer basketball. Then again, he’s one of the region’s best all-around athletes, a football-basketball-baseball star in the Valley Oak League. He would rather sell hamburgers at the snack bar than be pulled off the field, especially for the season opener.

"It's still sore sometimes," he said. "But I'm not going to stop playing because of it."

The game simply rotated around Lee.  He started the game at quarterback and tossed a touchdown pass to Nickolas Luna but gave way to backup A.J. Vasquez during portions of the second and third quarters. Lee, repurposed at wide receiver where he set all the receiver school records last season, caught important passes from Vasquez.

Then, with the game knotted at 14, Lee returned to QB and punched in the two touchdowns that decided the game. His 29-yard dash to the left put East Union ahead to stay, but the Lancers didn’t clinch it until his fourth-and-goal rip from the 1 with 2:13 to go.

Ripon, only three years removed from its memorable CIF state title, trotted out a rebuilding team that put up more than token resistance. The Indians led at halftime 7-6 and, early on, shortened the game with a clock-eating offense.

“We wanted to keep No. 1 (Lee) off the field,” Ripon coach Chris Musseman said. “We knew he was a dude.”

East Union eventually reversed roles with Ripon late in the game, running effectively with Lee and David Flores (16 carries, 72 yards).  In fact, Ripon managed only 12 yards and a single first down over two fourth-quarter possessions.

“I told the guys (at halftime) that it would be good if we could play at least one half of East Union football,” said EU second-year coach Mike Kuhnlenz, who led the Lancers to their first playoff win in 29 years last fall. “The defense played good in the second half…but we’ve got a long way to go.”

Kuhnlenz inserted Vasquez—following a Lee interception – and the senior threw effectively and gave EU a lift. Vasquez’s 9-yard pass to Anthony Avelar, followed by Flores’ 2-point conversion, gave the Lancers a 14-7 lead less than a minute into the second half.

Ripon responded with a short-field march capped by a 6-yard Trent Vink pass to Adam Johnston, who pounded through a defender into the end zone to tie 14-14.

The Indians, who will welcome Sonora next week for its home opener, showed some potency on Xzavier Clark’s 41-yard burst for a touchdown during the second quarter. Clark was bothered by an injury during the second half, however, as the East Union defense gradually stiffened.

“I am actually happy with the toughness our kids showed,” Musseman said.  “It was just a bad snap, or a holding penalty or a fumble. We’re not a big explosive offense. When we got behind the (first down) sticks, that really slowed us down.”

East Union no doubt will require a better start next week when Downey takes the trip down Highway 99. Kuhnlenz wasn’t pleased with his team’s first half vs. Ripon, though he’ll be relieved to coach tough lessons with his team’s record at 1-0.

“I’ve got to do a better job of getting my team in better places on the field so we can succeed,” he said. “We’ll have our hands full with Downey.”

But Downey already understands one important fact: Lee can play.