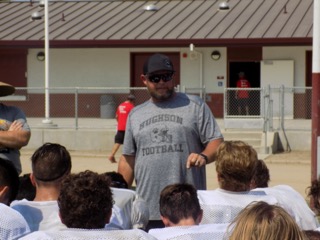 Hughson High's first-year head coach, Shaun King, talks to his team during a scrimmage at Ceres High on Aug. 11, 2018. King returns to Hughson after running the offense at Waterford.

With the season fast approaching, high school football teams across the Sac-Joaquin Section took part in scrimmages over the weekend.

Ceres played host to Hughson, Davis and Central Valley on Saturday morning. The scrimmage consisted of two games for each team, and each showcased a star. Among them were Davis quarterback Xavier Rodriguez, who ranked No. 44 in the Front Row's list of top-50 returning players; Ceres running back Felipe Martinez, second on the team in rushing yards (331) and touchdowns (four) last season; Hughson running back Carlos Arreola, who rushed for nearly 900 yards and totaled 15 TDs last fall; and Central Valley linebacker Rylan Palecek, a defensive catalyst as the Hawks move into the Central California Conference.

The scrimmage also marked the unofficial debut of two head coaches. Shaun King returns to Hughson after a stint as Waterford’s offensive coordinator, and Matt Chachere takes over the reins from Bret Durossette after serving as Davis' defensive coordinator.

“We want to compete and put a good product on the field,” said King, whose team hosts Stagg of Stockton on Aug. 17. “Obviously we have a tough preseason schedule and the TVL is tough ... so as long as we compete every Friday night I will be happy.”

Noted Chachere: “It is a rebuilding year (and) guys are learning new offensive and defensive systems. We want to win and we want to win the conference, but at the same time we know there is learning curve.”