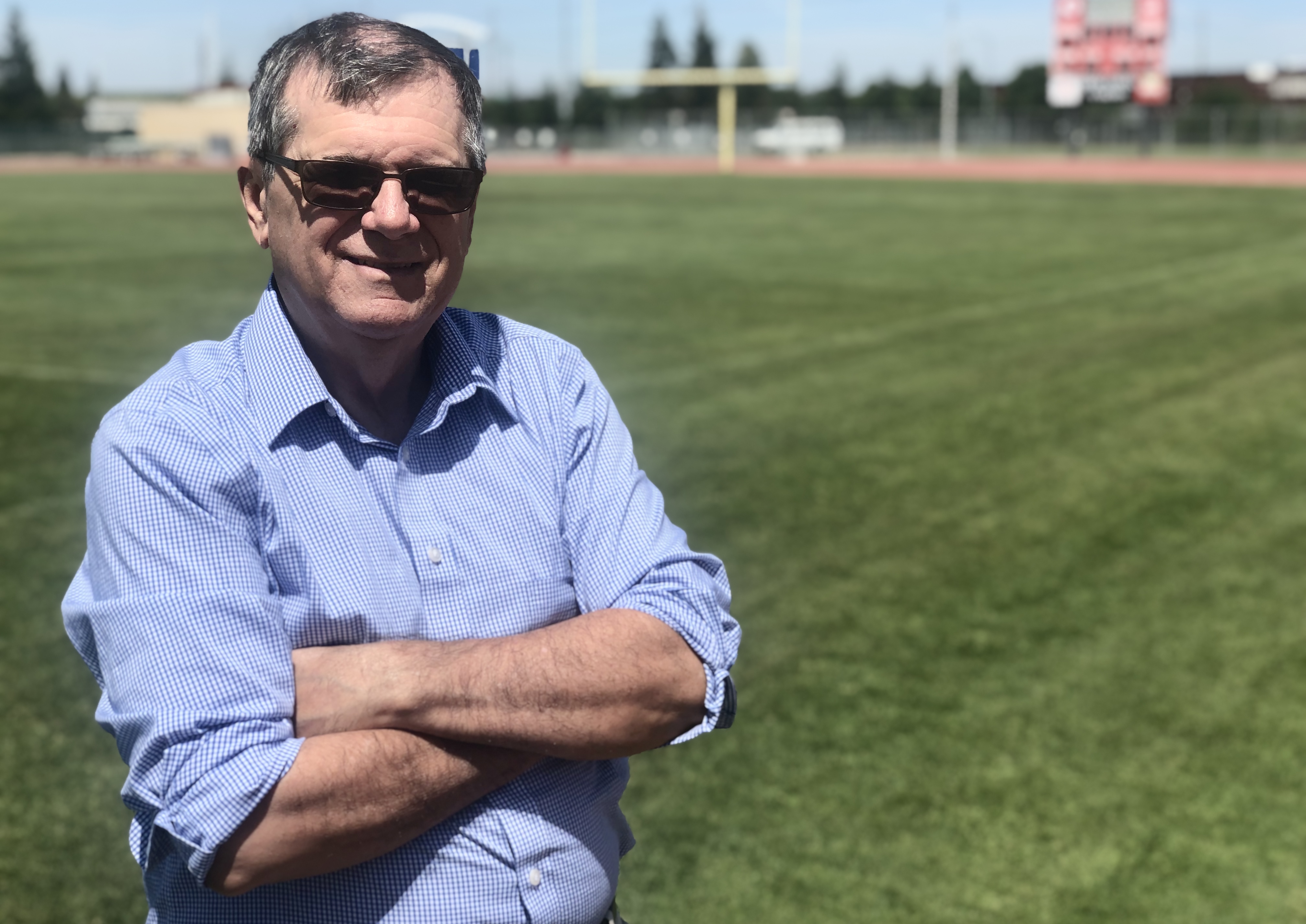 Ron Agostini was raised in the stands of high school football games in the Central Valley, sparking a passion for sports that would lead him to a career in sports journalism.

The pace always quickened on late Friday afternoons during the fall.  But after the walnuts were collected and the grape boxes were scattered for the next day’s harvest, my father doffed his cap, mopped his brow and said, “Let’s go to a game.”

We washed up, gobbled dinner on the run, piled into a Chevy Impala and off we went toward the appointed venue that week: Modesto, Sonora, Atwater, Hughson, Los Banos, Stockton, Manteca, Turlock, Oakdale, Tracy, Ripon, Newman, Gustine, Livingston, Hilmar and other stops.

And as we approached each town, the lights drew us in, like paper clips toward a magnet. After a few of those trips, I figured it out: Something good was happening underneath those lights.

I refer to the Friday Night Lights, of course, the beacons of prep football. Call them our first GPS system. They illuminated my youth long before they were made famous in a movie. More important, they also served as a building block to a 45-year career in sports journalism.

Another season is upon us, and I can’t believe over a half-century has passed since we listened to Brenda Lee, Dion and the Belmonts, Chuck Berry, the Four Seasons and other artists as we motored toward that week’s game.

The artists may have changed, but the destinations haven’t. High School football in the valley remains one of my life’s constants. Even now, after all the years and all the games and all the deadlines, I still feel a tinge of excitement before kickoff: What are we going to see tonight?

I was raised on a dairy not far from Highway 99 and the Stanislaus River, and later moved to a ranch north of Manteca. My heroes, to this day, are cousins Stan and Doug Laugero, football and multi-sports stars at Escalon High in the early 1960s. I wore their wins and losses. I cried when Stan's Cougars lost a tough one to Los Banos but exalted a year later when Doug led his team from behind to beat St. Mary's.

By the way, both are still with us – Stan a former golf instructor and Doug a retired accountant. Their mom died two years ago at 100 years young. The old stories are exchanged with each visit.

As I approached adolescence, I marveled at the intense rivalry between Manteca and Tracy and the rest of the Valley Oak League (the VOL didn’t grow teeth overnight). The one common denominator was our family hitting the road for games both home and away. If we missed, it would ruin the week.

I’m worried about football in 2019.  I want today’s kids, whether they’re players or spectators, to feel the same anticipation I felt. Yet participation in high school football in California dropped another 3.1 percent in 2018. The decline over the last five years is a scary 11.98 percent.

Parents, wary of head injuries, discourage their children from playing the game. I understand their concerns but they must also recognize the improvements in tackling techniques, equipment and concussion protocols. I hope the game can regain the parents’ trust.

Why? Because football still teaches those important life-lessons about teamwork, discipline, the value of hard work and the sacrifice of personal goals for the sake of your peers. Football is the ultimate team game, and each young man finds joy in victory and even more vital long-term understanding in defeat. Those postgame huddles, whether the coaches are reveling in the wins or consoling their teams after a loss, are equal in their impact.

I was fortunate enough to reach the top of my business: Super Bowls, the World Series, World Cups, the Masters, U.S. Opens, Rose Bowls  and too many other top-tier competitions to count. My roots, however, are forever embedded in the local football soil.

I reside in Ripon, not far from the public high school that issued diplomas to my mother in 1946 and my daughter in 2015.  I can see at least the glare of the Friday night lights from my front door. The symmetry gives me peace.

Another season is at hand. Get your chores done and enjoy it.

Ron Agostini was recognized for regional and national awards during his 40-year career at The Modesto Bee. He retired in June of 2017.