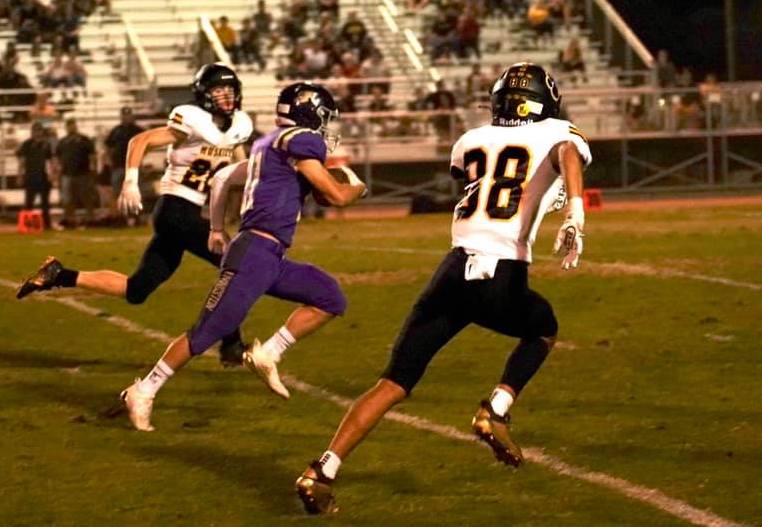 Livingston High receiver Cain Ambriz splits a pair of Hughson defenders on his way to a big gain during the Wolves' 27-0 Trans-Valley League win over the Huskies on Friday, Sept. 24, 2021, in Livingston, Calif. (Photo courtesy Scott Winton/Livingston High School)

LIVINGSTON — For years, the TVL has been referred to as the best small-school league in the state when it comes to high school football. And for good reason. Since 2009, TVL members Escalon, Hilmar, Ripon and Modesto Christian have won state championships (Escalon actually has won two CIF crowns during that time).

Livingston High served notice to the rest of the TVL two weeks ago that it would be a tough out this season.

Friday night, that all changed.

In a dominating 27-0 victory over Hughson, the Wolves let it be known that they’re more than just a tough out … they’re a legitimate title contender.

“We can be as good as we want to be,” said senior quarterback Rocklin Baptista. “I am fully confident in this team. It’s not cockiness, just confidence. This is what we want, this is what we’re fighting for, this is part of the whole process.”

On Sept. 17 in Hilmar, the Wolves let a 10-0 lead slip away and squandered multiple opportunities to finish the reigning league co-champs. Hughson also made the TVL take notice last week with in a competitive loss to defending state champion Escalon.

But as impressive as the Wolves and and Huskies had been in losses, they were still losses. And the loser of Friday’s matchup would find itself 0-2 in the ultra-competitive TVL — with no realistic shot at a league crown.

“(The players) were very aware but nobody really brought it up,” said LHS head coach Alex Gonzalez. “I think were just focused on the day-to-day, but they knew … and I’m just proud of how hard they worked every day leading up to today.”

After Baptista connected with Christian Alvarez on a 31-yard strike to give the Wolves an early 7-0 lead, the teams traded punts on their ensuing possessions. With 5:21 to play in the opening stanza, Hughson set up on its own 44 after a short Livingston kick. Three plays later, after crossing midfield, Flavio Aguilar picked off Huskies quarterback Anthony Quinteros, giving the Wolves the ball on their own 40. Seven plays later, Baptista exploded for a 30-yard TD run to make it 14-0 with 7:39 remaining in the first half.

After forcing Hughson to punt on its next possession, the Wolves marched inside the Huskies’ 5-yard line — thanks largely to a 48-yard gainer by junior Carlos Baez (17-124) — and were poised to make it a three-score game. But Hughson momentarily delayed the inevitable when a sack of Baptista resulted in a fumble, giving the Huskies the ball on their own 19.

However, on the very next play, Aguilar pilfered another Quinteros pass and the Wolves would extend the lead to 17-0 on Curt Ambriz’s 22-yard field goal as the horn sounded to end the first half.

Ambriz accounted for all the scoring in the second half, connecting on a 37-yard field goal with 9:42 to play in the fourth quarter, then hauling in a short pass from Baptista and racing in for a 67-yard score with 6:54 to play.

“I love what we’ve got going here,” said Baptista, who completed 13 of 19 passes for 205 yards and two scores, while rushing for 82 yards on eight attempts. “We want to bring Livingston football back to where it once was. We don’t want other teams to say, ‘Oh, it’s just Livingston.’