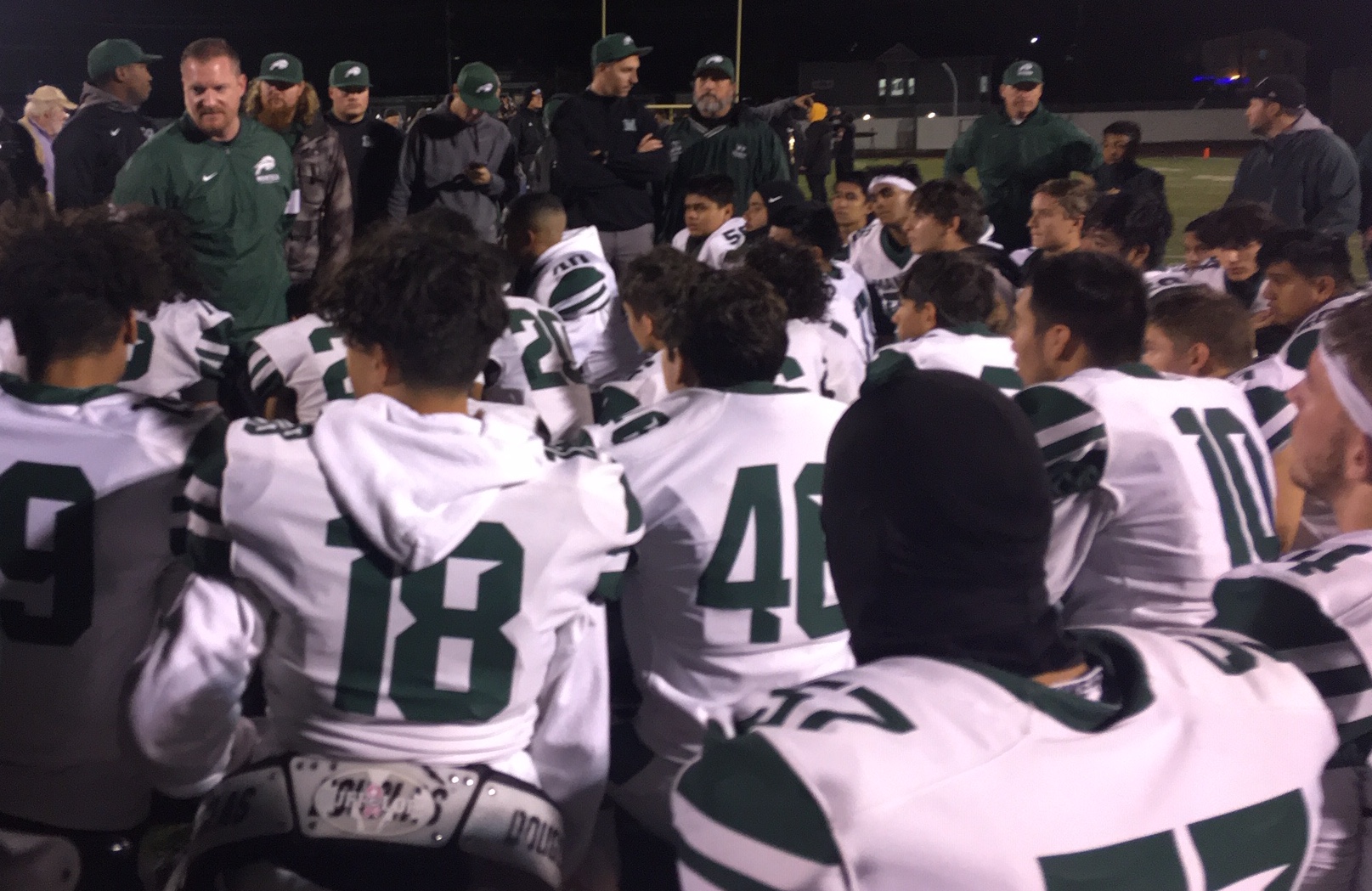 OAKLAND – The McClymonds High Warriors greet all their football guests with speed, collisions on defense and, well, more speed.

The Warriors introduced themselves to Manteca with all of the above Saturday night, a withering blitz that seemingly happened about an eye-blink after the coin toss.

Fast. Decisive. And not unusual for a school that has produced such icons as Bill Russell and Frank Robinson.

McClymonds (11-0) will meet Pacifica of Oxnard, a 51-23 winner over Birmingham of Lake Balboa for its fourth straight state title next week. Manteca (11-3) will pack the equipment after another landmark season, one that produced a Valley Oak League tri-title and a  seventh Sac-Joaquin Section championship.

“If you do that, you’re going to play teams like this,” Manteca coach Mark Varnum said. “That team (McClymonds) is an absolute monster.”

Conditions were wet but surprisingly rainless as the Oakland skyline shined not far away. The game became a showcase for one of California’s perennial powers.

Running back Montrell Harris, coveted by most of the Pacific 12 Conference, made the biggest impression. His shifty speed, combined with next-level acceleration, keyed the McClymonds offense. He scored the Warriors’ first touchdown and finished with 203 yards on 17 carries.

Manteca’s only chance mandated that it weather the early storm and somehow keep it close. No one has gotten within three touchdowns of the Warriors since their season opener. Problem was, the Mack Attack wasted no time.

“On the first kickoff you saw them coming off the edges,” said Manteca team captain Jacob De Jesus, who capped a brilliant career by catching five passes for 81 yards and rushing for 35 yards. “When you have a fast team you have hard hitters, because speed brings the hard hits.”

Manteca, though outgained 416-300, stood up to the McClymonds defense. Quarterback Ryan Ward found De Jesus for a 42-yard gain on Manteca’s third possession, leading to the first of two touchdowns by Trabron Russell.

Russell, who played against friends and even a relative in the city where he was raised, earned every inch of his 127 yards on 25 attempts. He absorbed a vicious blow on the goal line, yet still finished the Buffaloes’ efficient 71-yard drive during the third quarter.

“The hardest I’ve been hit this season,” Russell said.

Both McClymonds and Manteca were moved up to 2A -- four steps up for MClymonds -- but Manteca clearly felt more at ease in Division 3.  The Buffaloes don’t often witness such talent as Harris, sophomore quarterback Dreyan Paul (two rushing TDs, two passing TDs) or receiver-corner Edward Woods.

Woods turned Paul’s quick pass into a 71-yard sprint past the McClymonds bench for the Warriors’ third touchdown of the first quarter.  Manteca’s only consolation was the home team missing its first four conversions.

Just in case the point wasn’t yet made, McClymonds’ Jabril White opened the second half with a 73-yard return for a touchdown. That made it 37-7.

Making it worse for the Buffaloes were back-to-back McClymonds punts downed at the 1. The first led to a blocked punt for a safety and the second set up the Warriors’ final TD.

“We didn’t give our best effort tonight, and that’s unfortunate,” Varnum said. “I take my hat off to them (McClymonds). If we play our A-plus game, maybe we hang a little bit.”

Varnum told his team post-game that it was a victim of its own success. No one in December draws easy opponents, he knows, and Manteca reaching the NorCal final counts for a lot.

The Buffaloes no doubt will remember their stirring wins over Vista del Lago, Capital Christian and Placer for their third blue banner in the last four years. Those memories will linger longer than their foray into Oakland.

“To lose this game, it hurts,” De Jesus said, “but we got back what’s ours (the blue banner).”