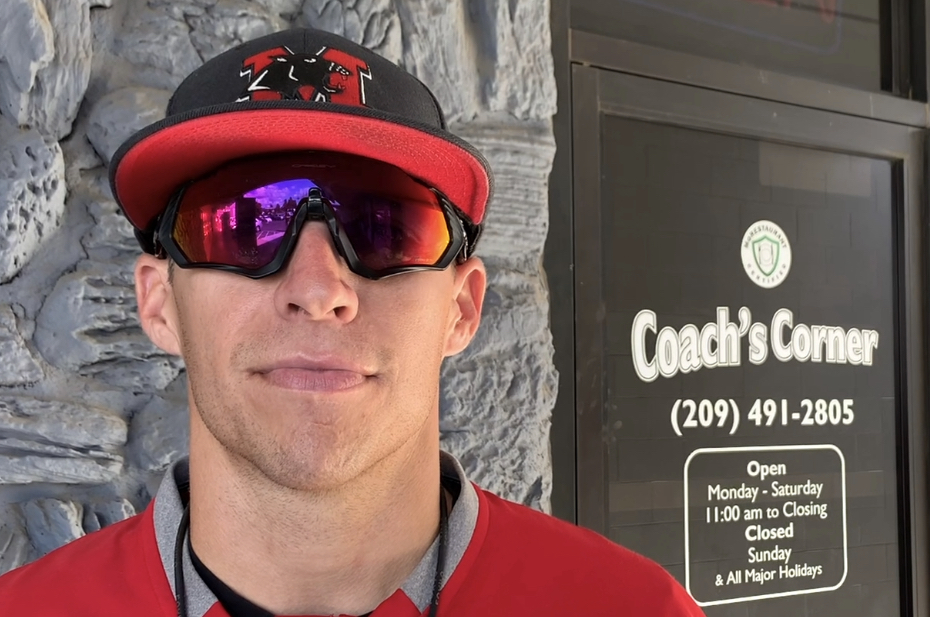 Dylan Miller is in the final weeks of his third season at the helm of his alma mater, Modesto High School. The Panthers have lost six straight to fall out of the postseason picture.

MODESTO – The Modesto High Panthers have lost six straight and, like the vast majority of football teams in the region, will watch their season wind to a close in a few weeks.

There will be no playoff games or November glory for most teams. It’s been a confusing campaign, a season shaped by COVID-related confusion, last-minute additions, 11th-hour cancellations and energy-draining stress about one’s health.  That there’s been a season at all probably amounts to a win.

Victories come in all shapes and sizes, especially for the teams that don’t win often on the scoreboard. Sometimes, simple improvement and week-to-week personal development count as special progress.

After all, only the perennial winning programs can say with varying degrees of smugness, “We’d rather win while we learn lessons about character.” For the rest, there’s no such luxury.

“It’s hard not to be excited about the track we’re on,” said Modesto third-year coach Dylan Miller, an MHS graduate working hard to build the Panthers. “We’re trying to make progress and incremental change. There’s no one thing we’re going to do that will make us a powerhouse, but we can make some small changes each week to get better.”

Modesto’s season has been odd. It opened with victories over Johansen and Beyer, but not a single game on the Panthers’ schedule has been decided by less than 23 points.

Miller points to the Panthers’ most recent losses, 43-15 to Gregori and 48-25 last week at Turlock, as measuring sticks. Modesto was within a possession of the lead in the fourth quarter before various mistakes sank its chances in both games.

Junior quarterback Eli McCabe gives Modesto hope for its final games at Pitman on Friday night and next week against Enochs. So does the senior leadership provided by two-way lineman Jesse Pulido and running back-outside linebacker Henry McGrath. The Panthers, down to only seven seniors, will max out to the end.

“We talk about getting better every day regardless of your circumstance and regardless of the situation,” Miller said. “We’re seeing that on the field more and more. ... Football at this time of the year is about finding those victories where you can.”

Modesto Christian coach Jerry Grimshaw knows first-hand the tall odds confronted each week by his undermanned Crusaders (1-6, 1-4). A case in point was last week’s 55-0 loss to Livingston. “We had 18 (players) Friday night. Livingston had 23 seniors,” Grimshaw said. “I tell our kids we just have to grow older.” MC finishes the season Friday night at Hilmar. … A pick-six by defensive lineman Adrian Martinez, off a deflection by teammate Jackson Brooks, sparked Grace Davis (8-0, 5-0) to a 49-0 victory over Beyer. The Spartans will celebrate homecoming against Johansen on Friday night at Gregori. Johansen has not played in two weeks due to virus protocols. … Junior quarterback Conner Stoddard is a big reason why Downey (7-1, 3-0) has won seven straight. He passed for 395 yards and six touchdowns during the Knights’ 45-20 win over Enochs. Downey will honor its seniors Friday night against Gregori. Both teams are 3-0 in the Central California Athletic League. …

Modesto Junior College (4-2, 1-0) opened Valley Conference play with an easy 65-14 homecoming win over West Hills. The surprise came from Visalia, where College of the Sequoias – not a major contender in recent years – nearly shocked powerful Fresno (5-1, 1-0). The Rams stopped a two-point conversion try with 10 seconds left for a hard-fought 28-27 win. The Pirates travel to Reedley (4-2, 0-1) for a 1 p.m. Saturday kickoff.  The Tigers were beaten by Sacramento 16-14 last week.