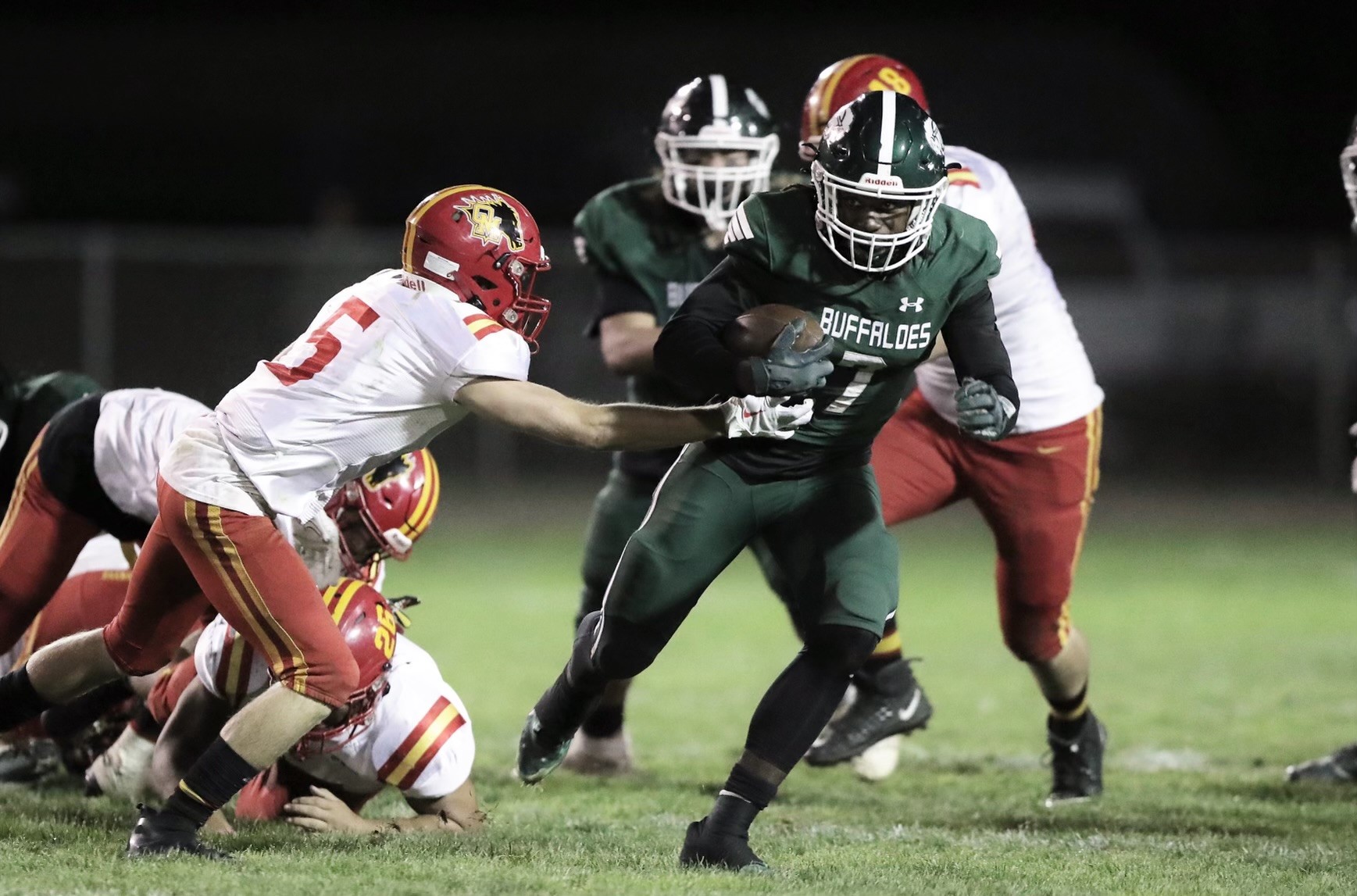 Manteca High junior running back Bryson Davis rushed for 222 yards and three touchdowns in a 55-0 victory over Oakdale on Friday, Oct. 28, 2022. (Sean Kahler)

Manteca shuts out rival Oakdale, stakes claim for No. 1 seed in Division 2 playoffs

Trying to stop the Manteca High football team's offense is like killing a hydra – you cut off one head, and it just grows two more.

Longtime Valley Oak League rival Oakdale found this out the hard way, losing 55-0 on Friday night as Gus Schmiedt Field. The 55-point loss is the Mustang’s largest defeat at the hands of the Buffaloes since 2005 (34-7).

On a night when four-star All-American and Florida State commit Blake Nichelson had just seven rushes for 42 yards, junior Bryson Davis took his turn in the spotlight. Davis tallied 222 yards and three touchdowns, one of which went for 70 yards.

“It feels great,” said Davis, "but we did it as a team, and won as a team, (and the offensive) line was blocking great.”

A criminally underrated aspect of a well-functioning offense is a good offensive line, and over these past two weeks, nobody’s been better than Manteca’s men in the trenches. Senior Mason Gibson, a returning all-VOL selection, has been a crucial part of Manteca’s steel curtain.

“Honestly, as an O-lineman on gamedays, it’s really simple – block the man you’re supposed to block, get up the field, and for passing, you’ve got to protect your quarterback,” said Gibson. “You’re the wall. You are the wall, and you have to stay like that."

Head coach Mark Varnum had some high praise for his team, calling the win “the most complete game I’ve seen us play.”

“Blake demands two or three guys on him, so that opens the box up for Bryson, he had a huge night tonight. Hudson (Wyatt), his touchdown ratio is ridiculous. When he throws the ball, he’s throwing touchdowns.”

Hudson Wyatt attempted only six passes, completing five for an impressive 130 yards and two scores, both strikes to Nichelson. Wyatt also rumbled his way into the endzone for a 68-yard rushing score.

The Buffaloes closed the regular season at 8-1, second only to Central Catholic in the vaunted VOL. The Buffaloes will likely be the No. 1 seed in the Sac-Joaquin Section Division II playoffs when the brackets are announced on Sunday.

Lucas Stackpole is an intern reporter with FrontRowPreps.com. Stackpole is a senior at Sierra High. He plans to pursue a career in journalism.