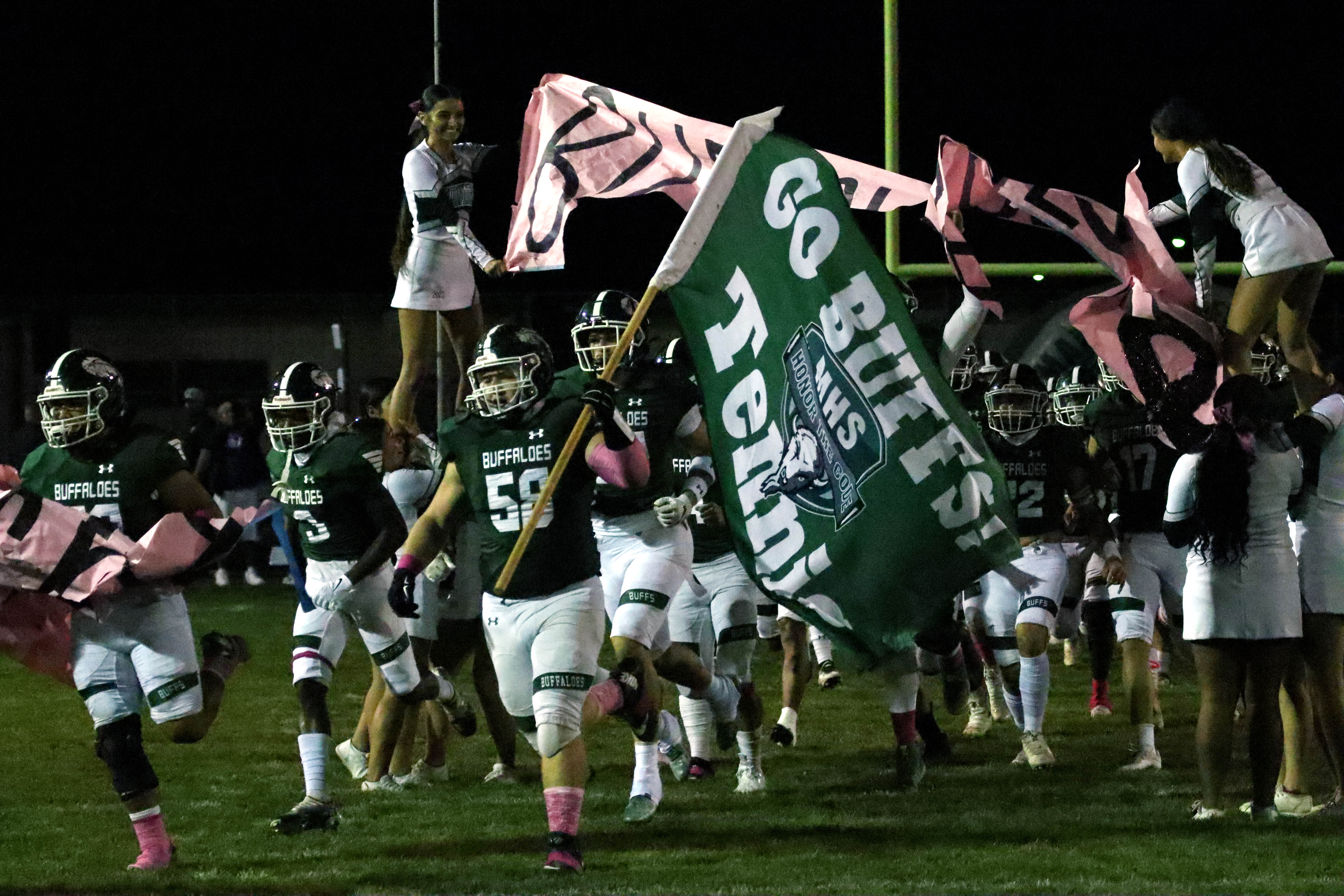 The Manteca Buffaloes stampede onto the field at Gus Schmiedt Stadium before facing Central Catholic. The Buffaloes play in the Sac-Joaquin Section D-II final on Saturday, Nov. 26, 2022, at Sac City College. (Samantha Schmidt)

Thanksgiving practice for Buffs means only one thing: Chance for ninth ring

In what’s become an annual tradition, the Manteca High football team spent Thanksgiving morning working up an appetite for dinner, and the Buffs wouldn’t have it any other way.

The Buffaloes (10-1) are gearing up to take on the Granite Bay Grizzlies (9-4) for the Sac-Joaquin Section Division II championship at Sacramento City College on Saturday at 6 p.m.

Having won section titles in four of the last five years, and as the reigning D-III champs, the Buffaloes have experience on their side.

“They’re a veteran team,” Varnum said of his group, ranked No. 1 in the FrontRowPreps.com large-school poll for much of the season. “They've been to a couple of these, they know what it takes, and they know what an honor it is.”

One of those veterans is local phenom Blake Nichelson, who committed to Florida State University as a linebacker after receiving 19 offers. Nichelson is a force with more than 3,600 career rushing yards and 83 career touchdowns, but that also makes him a target.

“It just opens up opportunities for other dudes and they take advantage of it,” he said.

“Other dudes” includes players like Bryson Davis, Kaden MacDannald, and, in a surprise showing against Rocklin, fullback Alijah Cota.

“He wanted the ball Friday night against Rocklin; he really, really wanted it,” said Varnum. “He took his play up to a whole other level.”

Isaiah White, a sophomore, has also made an impact this year with his effort, relentless energy and big hits. In the come-from-behind victory over Rocklin, White sparked the defense with a few full-force tackles.

“That kid, he's got a motor like no one else,” said Varnum.

White is currently leading the team for tackles per game though he has only played in eight games.

Varnum, impressed by White’s drive, continued, “All go all the time … he sets the tone for us.”

“It was kind of the tale of two halves,” reflected Varnum. “In the first half, we didn’t play great. We made a few mistakes…In the 2nd half, played clean and looked like ourselves again.”

The Buffaloes will need to set the tone right away this week; last week’s 34-28 victory over Rocklin in the section semifinals was anything but smooth. The Buffs went into halftime down by eight points. After a touchdown by each team in the third, Manteca shut out Rocklin in the fourth and finished the game with a 15-0 spurt.

“Whatever we did in that second half, we need to do for four quarters on Saturday,” continued Varnum.

The Buffaloes dominated this season with their lone loss coming in week 10 to Division I section semifinalist Central Catholic High. They didn’t let that loss distract them, though, shutting out Oakdale to finish league play and continuing into the postseason.

“It kind of refocused us; showed us the areas we needed to work on,” Varnum said. “We’re still rolling.”