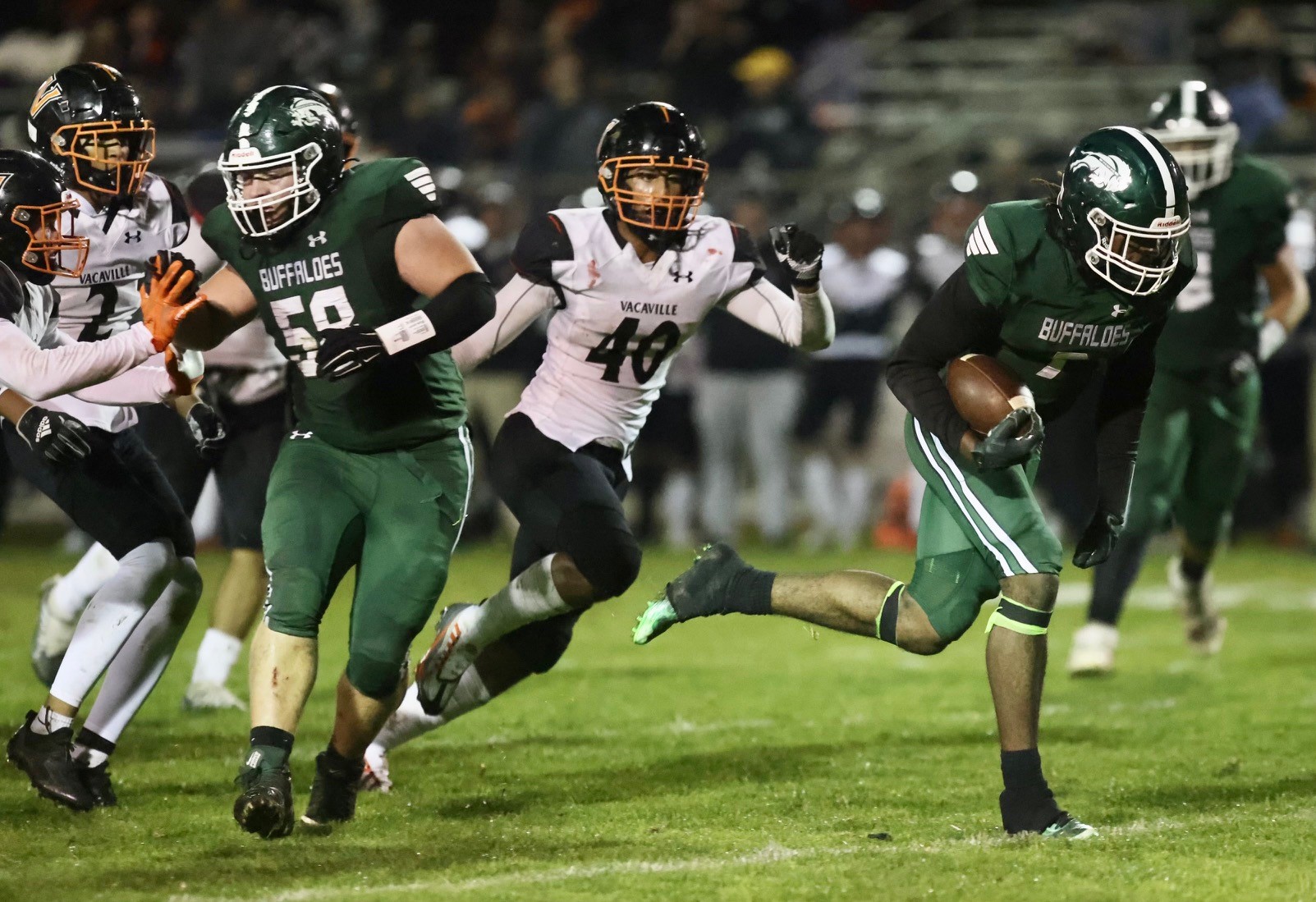 Top-ranked Manteca's message to the rest of the Sac-Joaquin Section Division II field was clear: These are Buffaloes, not bison.

Manteca scored on its first possession and a key fourth-and-goal by the defense set the tone for an impressive all-around performance.

Coach Mark Varnum was fired up about the victory, and rightfully so – the playoffs run though Gus Schmidt Field, and a blowout win in the opening round certainly sets the tone.

“Oh, absolutely (it feels good). Pretty dominant performance, and I think we can be better. That’s the best part – we can absolutely be better.”

Despite the shutout effort, Varnum offered some light criticism postgame.

“I think up front, we got to get the motor going a little bit quicker," Varnum said. "We got to be a little sharper, getting guys in and out and personnel stuff ... (Hudson Wyatt) took way too many hits tonight, so I got on the line pretty good. We got to keep him clean.”

Junior running back Bryson Davis turned in another outstanding performance. Davis had 9 carries for 154 yards, three of which were touchdowns – all in first three quarters. As the game’s fate became apparent, the Buffaloes pulled the starters for a majority of the fourth.

Davis, a man of few words, was pleased with the victory.

“It’s just practicing hard, depending on my line," said Davis, one of the region's top rushers despite sharing carries -- and the spotlight -- with Nichelson. "I know they’re going to do what they need to do, and I just follow up.”

"We know their reputation. We know their tradition -- great football team, great athletes," Varnum said. "Happy to be home, but they’re going bring it.”

On the defensive side of the ball, sophomore Eddie Anthony led a no-fly-zone secondary that only allowed four completions. Anthony played the position with ease, having three pass breakups and making his presence felt throughout the contest. He was named the FrontRowPreps.com player of the game.

“I’ve been watching film, I know what the run, that out and that stop (routes), and I just remembered, and I just play that.”

Spearheading such a dominant playoff performance has to be a good feeling but doing it in your second year of high school makes it even better.

“It feels good, I mean – I’m only a sophomore, and I know there’s a lot to come," Anthony said. "It feels good to know we can shutout teams like that.”

Sierra High senior Lucas Stackpole is an intern sports reporter for FrontRowPreps.com. Stackpole, an Honor Roll student and two-sport athlete, hopes to major in Journalism and forge a career in sports journalism.