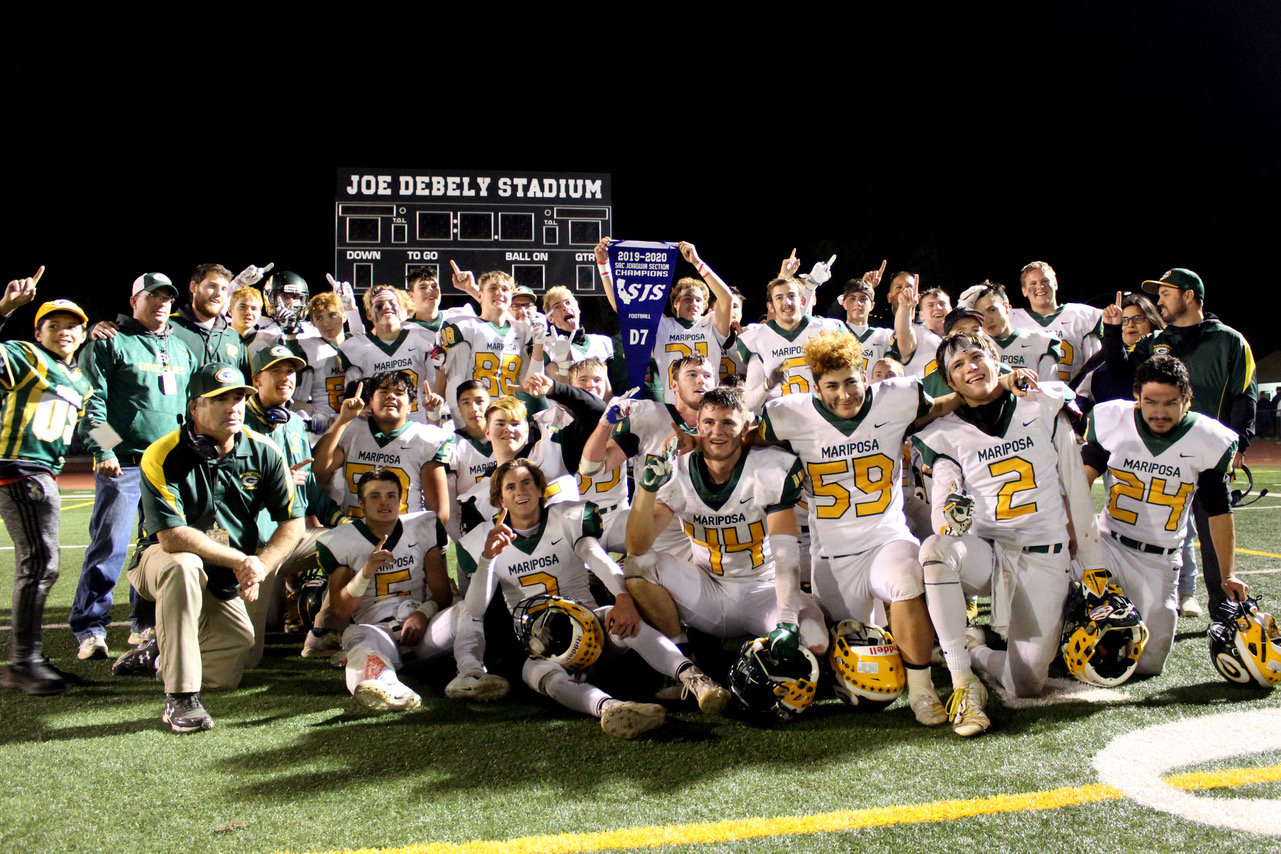 Mariposa players celebrate their first Sac-Joaquin Section championship since 1995. The Grizzlies, who lost to the reigning section and state champions during the regular season, won 17-14 in overtime on Friday, Nov. 22, at Joe Debely Stadium in Turlock, Calif. (Samantha Schmidt/Front Row Sports)

TURLOCK — Mariposa kicker Nathan Kunz wasn’t thinking about the botched field-goal attempt at the end of regulation, or about the potential game-winning kick he missed on Oct. 25.

He was only thinking about his next kick attempt — a 28-yarder that gave his team a 17-14 overtime victory over reigning champion Denair and earned the Grizzlies their first Sac-Joaquin Section banner since 1995, Friday night at Joe Debely Stadium.

After a scoreless first half, Mariposa (8-4) fell behind 14-0 in the first four minutes of the third quarter when Denair come out of the halftime locker room looking like a new team.

On the first play from scrimmage, Jorge Yanez broke free for 56 yards, then Dylan DeSilva scored from 21 to give the defending state champs a 7-0 lead just 23 seconds into the second half.

The Grizzlies’ next possession resulted in a fumble and Yanez found pay dirt from 35 yards out to give Denair a 14-0 lead with just 1:08 elapsed in the third quarter.

The Coyotes appeared read to break it open when Yanez picked off a pass about ninety second later, but they couldn’t capitalize.

This opened the door for Mariposa, which finally got on the board when Logan Donati broke free for a 74-yard jaunt with 6:48 to play in the third quarter.

The Grizzlies tied the score 1:10 into the fourth quarter when quarterback Ryan Green found Jonathan Chapman on a 9-yard scoring strike.

“These guys have done that all year,” said Mariposa coach  Robert Stitt. “They come out kind of soft in the third quarter, but we always finish with a lot of heart and desire.”

The ensuing kickoff sailed into the end zone and Denair set up shot on its own 20 with 9:50 left in the game. The Coyotes embarked on a 10-play drive that ate up nearly 6 minutes of clock before a fumble with 4:12 to play gave the Grizzlies the ball near midfield.

“I think that’s kind of been our hiccup the whole year,” said Denair coach Anthony Armas. “We haven’t been protecting the ball as well as we’d like to. Obviously, a problem, but we do what we can. Our kids played their butts off and sometimes you’re just going to lose a ball, and we did.”

The snap was muffed and a kick wasn’t even attempted, forcing overtime.