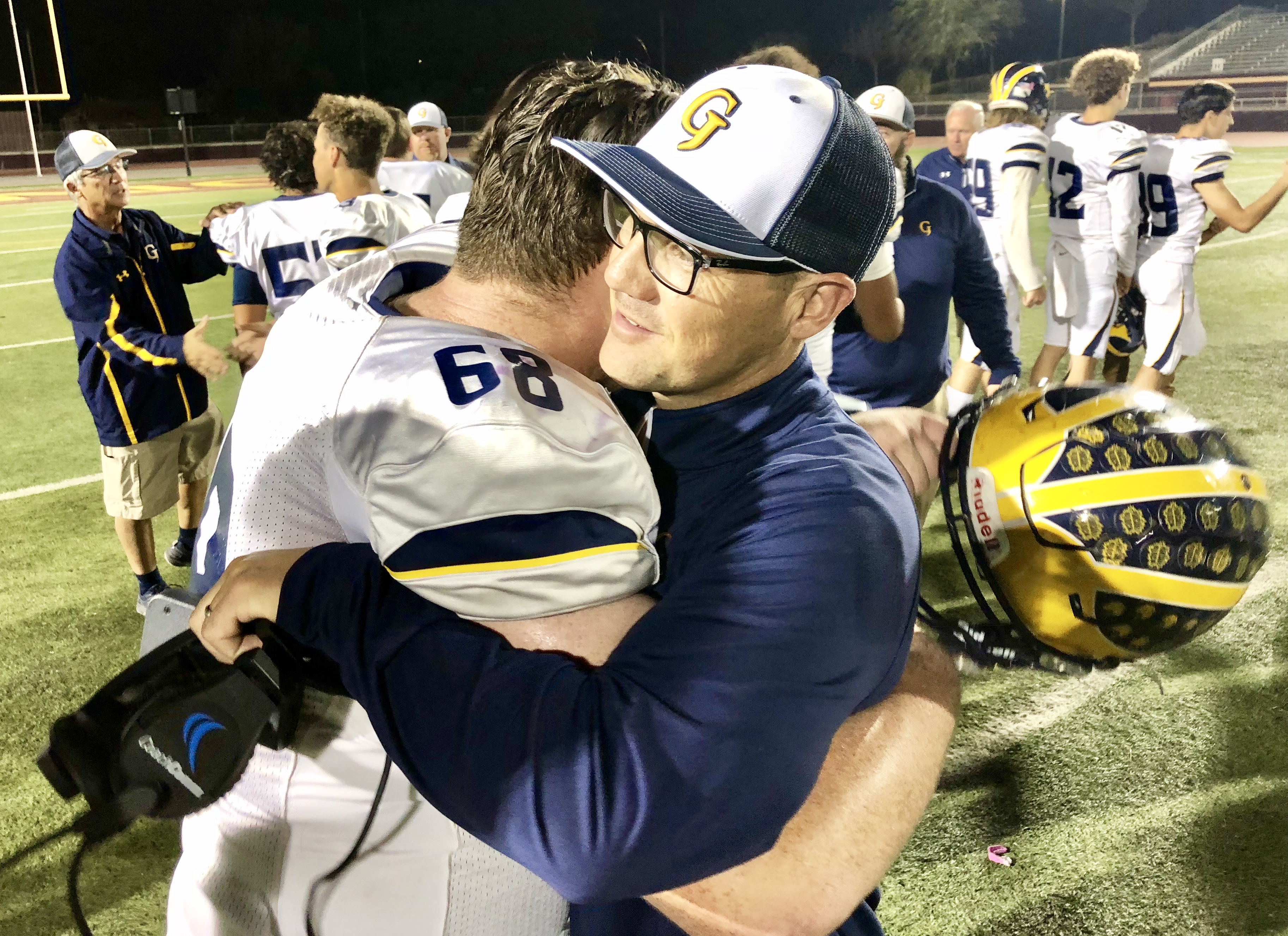 Gregori coach Jason McCoy embraces his players after a 52-7 loss to Edison on Nov. 2, 2018, in the first round of the Sac-Joaquin Section Division I playoffs. It was McCoy's last game; he stepped down to spend more time with his young family. (James Burns)

McCoy Era over at Gregori: 'God has a plan for me and I've got to follow that'

STOCKTON — Gregori football coach Jason McCoy found his father, Bruce McCoy, on the sideline, sharing a quick embrace as the offseason closed quickly on the Jaguars.

From the moment he took the reins at Gregori, Modesto City School's youngest program, McCoy has preached the power and importance of family, and family will carry the 40-year-old into the next season of his life.

McCoy has stepped down as the football coach at Gregori, hitting pause on a decorated 17-year coaching career to spend more time with his wife and three young children. McCoy informed his players before Friday’s 52-7 loss to Edison of Stockton in the first round of the Sac-Joaquin Section Division I playoffs.

On Friday, Gregori had a chance to win the program’s first road playoff game, but couldn’t keep pace with fabulous freshman running back Raleek Brown and the Vikings, the San Joaquin Athletic Association champion.

Gregori finished 5-6, a season mostly doomed by injuries. It was just the second time the Jaguars finished below .500 under McCoy.

“It’s hard to believe it has been seven years. I’m so blessed to have worked with great administrators, a great student body and a great coaching staff,” McCoy said. “Gregori really is a special place. I’m very thankful administration put their trust in me to lead this program and I wanted to give it my all.

“I wanted to build off a team that was 0-20 and I think we’ve done a good job — five consecutive playoffs, a championship and good lower levels.”

Standing near midfield after the running-clock loss, McCoy hugged most of his players. With promising young talent in the program, including junior quarterback Baker Melendez and running backs Titus Rhiney and Isaac Herman, McCoy is certain the Jaguars will bounce back and compete in the Central California Athletic League.

Melendez scored the Jaguars’ only touchdown on Friday, plunging in from the 2-yard line on the team’s first offensive drive to tie the game at 7s. Rhiney set up the score with a 23-yard run.

It was all Edison after that. After winning the school’s first league title in 41 years, the Vikings reeled off 45 unanswered points to shore up a second-round showdown with state-ranked Folsom next week.

“It’s been a great opportunity. I’ll always be grateful for my time at Gregori, but this next phase of my life I want to be there for my family,” McCoy said. “For my heart, it’s either you’re all in or not, and that’s for my family and this program. This being my last game, it hurts, but I know God has a plan for me and I’ve got to follow that.”