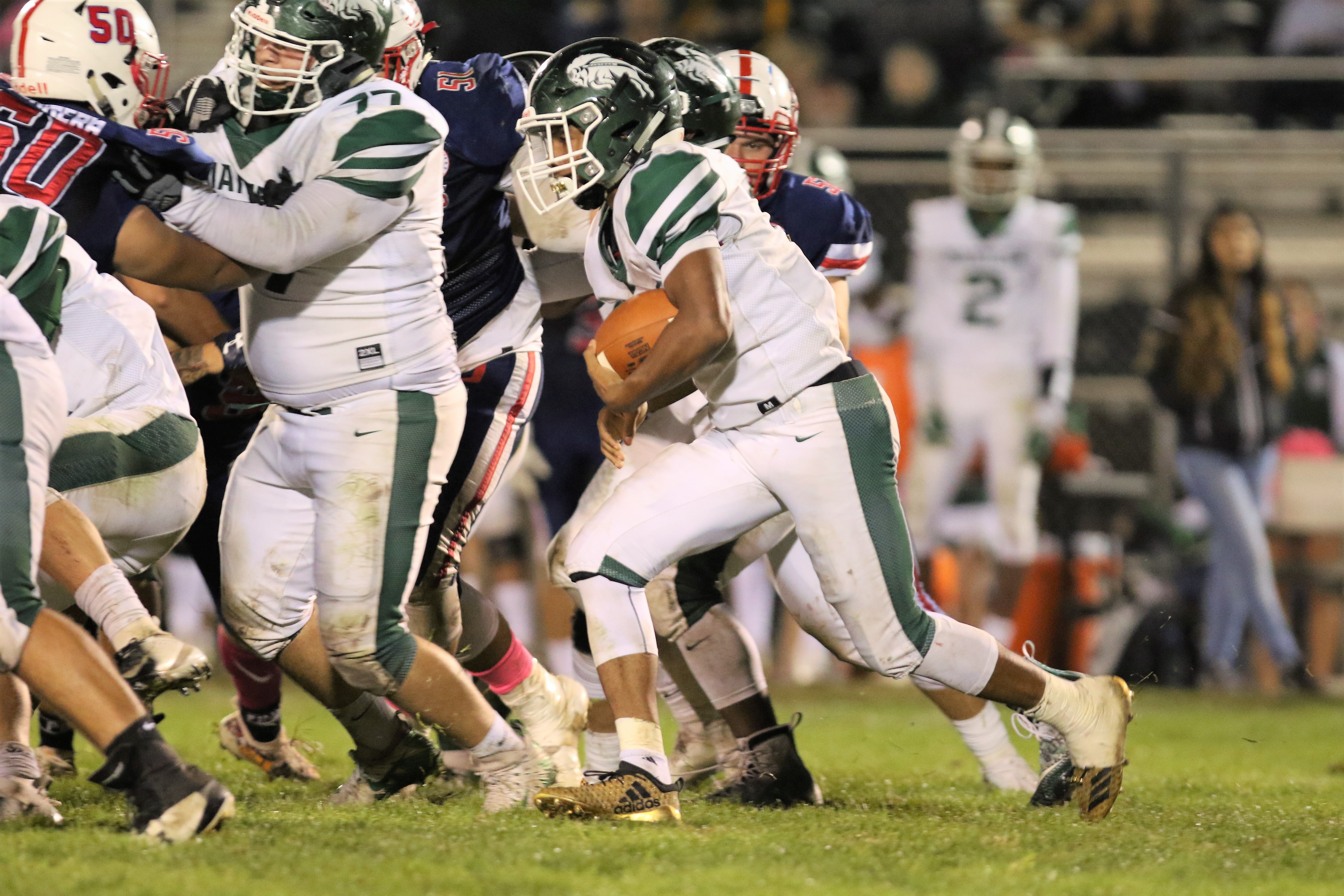 Manteca High running back Trabron Russell was used sparingly in 64-6 victory over Lathrop on Aug. 23, 2019. The Buffaloes will unleash their 1,000-yard running back this week against Downey. (Sean Kahler Photography)

Friday night’s rematch between Manteca and Downey amounts to a memory test: Can Downey put aside last year’s result? Will Manteca be motivated by it?

We already know one thing: The Buffaloes have not forgotten their tough 44-42 loss to the Knights in 2018.

“We definitely have had it (the game) circled,” Manteca second-year coach Mark Varnum said. “It’s been a motivating factor for 12 months.”

The game, beginning at 7 p.m. at Chuck Hughes Stadium, could be a shootout. Both teams bring in potent offenses featuring talent at the skill positions, and both strutted their stuff during season-opening victories last week.

Downey quarterback Bryce Gouker passed for five touchdowns as the Knights started fast to beat East Union 49-30. Manteca was not tested during a 64-6 rout of Lathrop, as quarterback Ryan Ward completed seven of eight passes for 278 yards and four touchdowns.

“Last year was a prime example of a young team against experience,” Varnum said. “We had 10 new starters on defense. I don’t think we were ready for that big of a challenge so early.  We want to right that wrong and show we’re at a different level this year.”

“Based on last year’s game, this is a classic air-it-out vs.grind-it-out,” Plaa said. “But we also can run a little and they can pass a little.”

Rivera, low-slung and hard to tackle at 150 pounds, provides versatility in Downey’s Air Raid attack. He scored twice at East Union and is poised for a successful senior year.

“Pound for pound, he’s the toughest guy on our roster,” Plaa said. “I don’t think he has any body fat.”

It’s clear both quarterbacks have improved.  Gouker showed he can carry the load after sharing snaps with Beau Green last year. Ward, a future pitcher at the University of the Pacific, possesses athleticism not unlike his predecessor Gino Campiotti (Northern Arizona).

“His (Ward’s) maturity and decision making are much better,” Varnum said. “Last year, he would try for the extra yard. This year, he knows how to slide.”

The Knights could be helped by a few starters who were held out of last week’s game due to injury.

“I would think they (Manteca) want some revenge,” Plaa said.“As a fan, that game was exciting to watch, but not for me until it was over.”