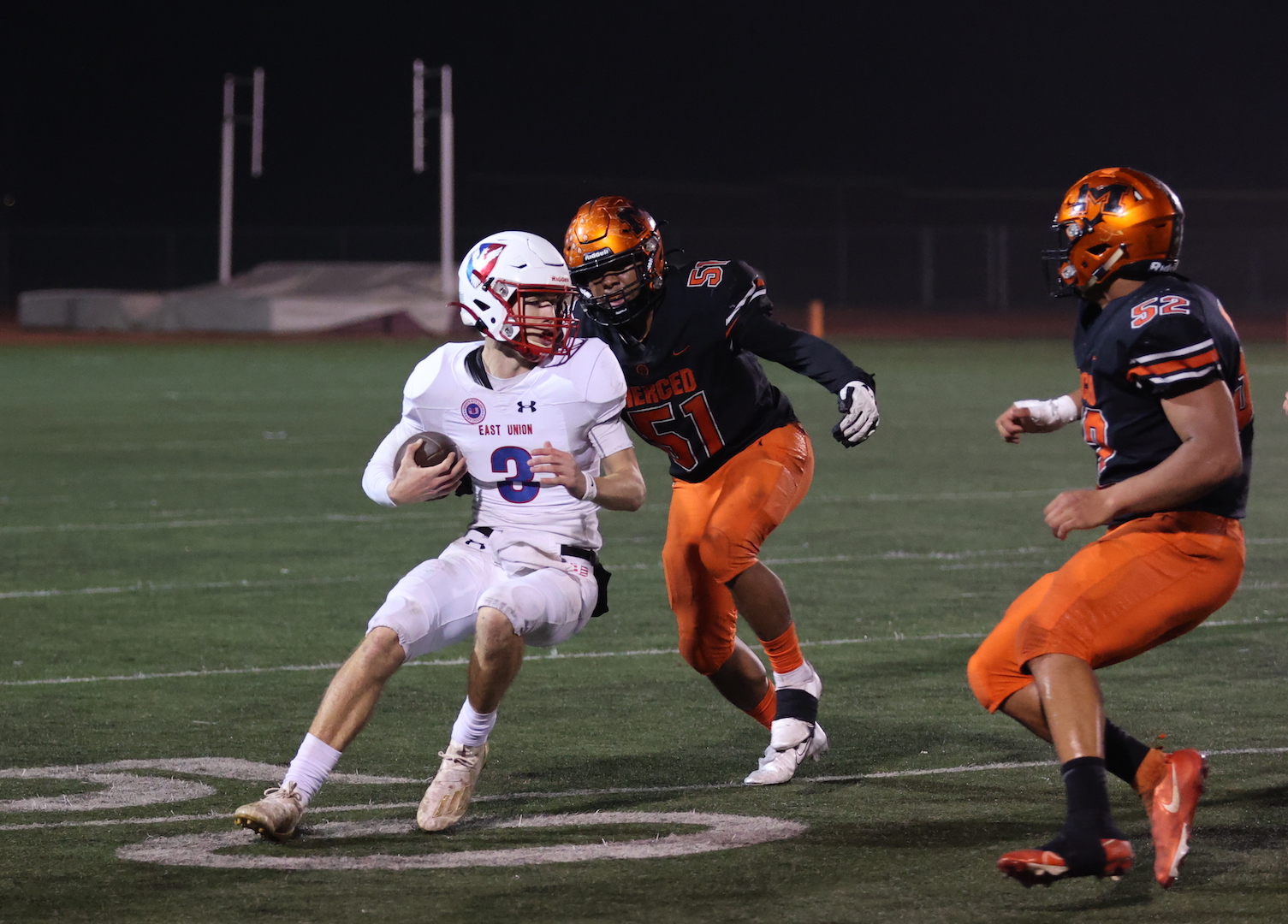 Merced High senior Jaylen Thao-Booth (51) and his sophomore brother Jalonn close in on East Union quarterback Luke Weaver during the Bears' 56-15 victory in the second round of the Sac-Joaquin Section Division IV playoffs on Friday, Nov. 12, 2021, at Golden Valley High School in Merced, Calif. (Photos courtesy of Ted Torres/TedTorresPhoto@gmail.com

MERCED — Merced and East Union averaged 44 and 42 points, respectively, during the 2021 regular season, leading most top think this second-round matchup in the Sac-Joaquin Section Division IV playoffs would be a shootout.

They were half right.

The Bears’ offense clicked early and often as quarterback Seth Scheidt threw four touchdown passes (three to Jack Collins) and ran for another in a 56-15 victory over the Lancers.

Despite Merced’s offensive outburst, it was the defense that really stood out, preventing the expected shootout with eight sacks — five by Jaylen Thao-Booth —and two interceptions, including a pick-six by sophomore Jaylonn Booth.

“Those two guys are amazing” said Merced coach Rob Scheidt said of the Booth brothers. “The one kid’s a sophomore, he’s bigger, but the other guy is one of the best players I’ve ever coached.”

And that’s saying something. Scheidt, now in his 26th season as head coach of the Bears, has coach some great ones over the last quarter century.

“We knew (East Union) that they were going to try to man-block with (Jaylen), and you just can’t do it” said Scheidt, the longest tenured coach in the Front Row region. “No one’s had success doing it.”

The Bears were in quarterback Luke Weaver’s face all night and the elder Booth led the charge, totaling five sacks on the night.

“We knew that we had to execute well and come out and fire against these guys,” said Jaylen Thao-Booth. “We knew that if they got momentum, they were going to keep rolling.”

Scheidt threw TDs to Collins and Cyrus Amos, and Collins hit Enoch Evans for a 59-yard score on a double-pass as the Bears jumped out to a 21-0 lead.

The Lancers finally got on the board with David Flores’ 1-yard blast into the end zone with 4:30 to play in the first half, but they couldn’t come up with a defensive stop on their next possession.

Merced extended its lead back to three scores when Collins hauled in a 40-yarder from Scheidt with 1:40 to play in the half.

East Union needed a score to halve the lead before halftime, but turned the ball over on downs at midfield and went into the locker room trailing 28-7.

The Lancers opened the second half the way they finished the first, turning the ball over on downs.

Starting at their own 35, EU gained 15 on a Weaver keeper then gained 9 to the Bears’ 41 on a carry by Dylan Lee. A 5-yard loss on a flat-pass to Lee made third-and-6 at the 47 before back-to-back sacks ended the drive gave Merced the ball on the Lancers’ 40.

Evahn Perez nearly scored on the first play of the drive, picking up 17. Three players later, Ryan Lee cashed in from the 2 to make it 35-7. Forty seconds later, Jalonn Booth delivered the signature play of the evening when he tipped the ball out of the air and into his own hands then raced untouched for a 34-yard touchdown that made it 42-7 with 6:37 to play in the third quarter.

East Union’s ensuing possession again ended on downs and Merced capitalized when Scheidt found Collins for the third time in the game, giving the Bears a 49-7 lead, their largest of the game.