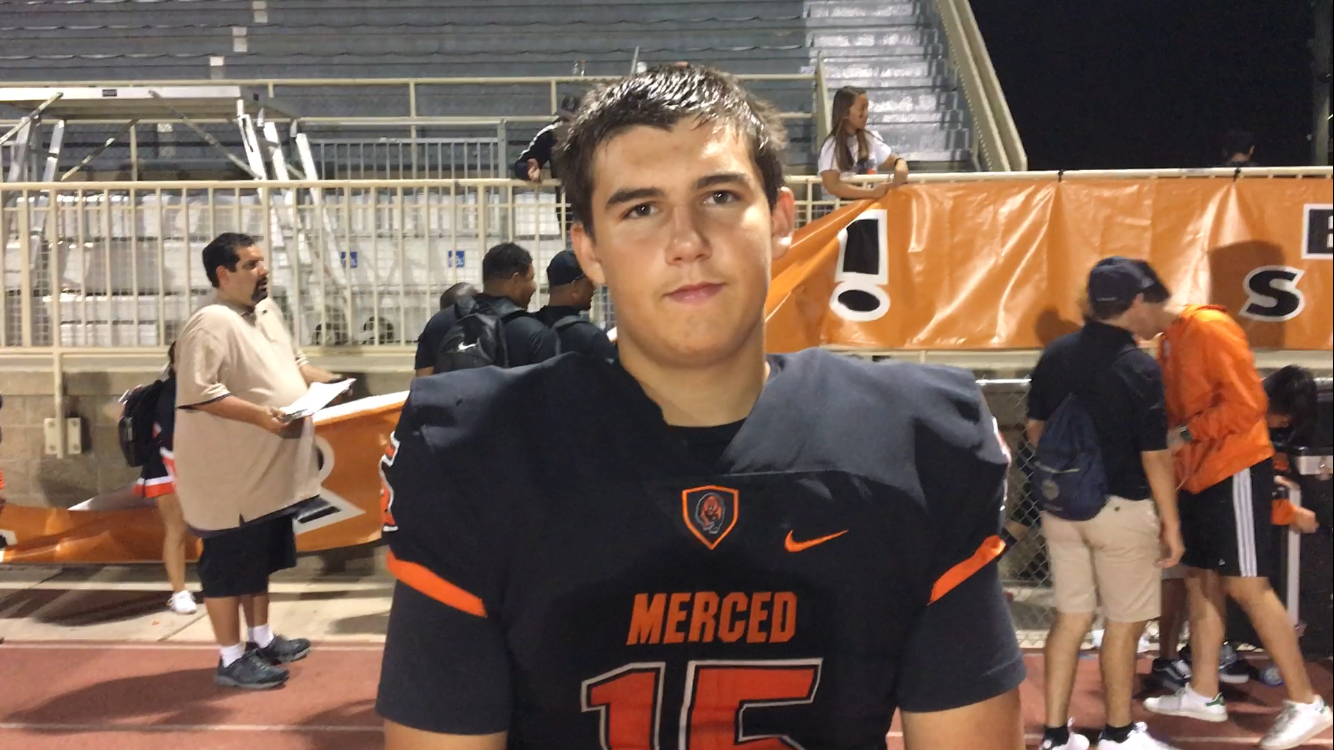 MERCED — The history of football is riddled with teams attempting two quarterback systems to no avail.

Through the opening two weeks of the football season, Merced High has more than defied the odds.

The duo both showcased their full skill sets against the Jaguars, each leading Merced on a trio of scoring drives while helping rack up over 450 yards of total offense.

“I think they both bring something different to the team and that something is special,” said Bears coach Rob Scheidt, who picked up his 150th career victory with the win. “As a coach you’re lucky if you have one of those guys in a season, much less both.

“The truth is that there’s a lot of talented guys on this offense and only one ball to share between them. It’s gone this well because we’re seeing a lot of unselfishness from this group.”

The Bears (2-0) picked right up where they left off of Zero Week’s 51-15 victory over Del Campo, marching straight down the field on their first three drives.

Warren (94 total yards) got things going with a six-play, game-opening drive, capped by a 10-yard touchdown pass to Ezra Morales. Garcia (12 of 14 passing for 261 yards) connected with Morales three plays into his first series for a 75-yard touchdown toss. Desmond Thompson (12 carries, 82 yards, two TDs) followed with a 6-yard touchdown run to give Merced a 21-0 lead with 7:45 to go in the opening half.

“Everybody is really supporting me and Dhameer,” Garcia said. “Dhameer is doing a great job and then I kind of step in and try to finish what he starts. When he finishes I’m proud of him. When I score, he’s proud of me and the whole team is behind us.”

Despite Merced’s fast start, Gregori (0-2) scratched their way back into the game at the half.

Marcello Longstreth answered Thompson’s TD run with a long kick return for a score to get the Jaguars on the board.

Gregori quarterback Baker Melendez (11-17-295) then countered a Garcia 38-yard touchdown pass to Xavier Stewart (5 catches, 130 yards) with a 13-yard strike to Isaac Herman on a fourth-and-goal just before the half to pull the Jaguars within 28-14 at the break.

Any momentum Gregori carried into intermission, however, quickly evaporated when a squib kick to open the second half took a Bear bounce. TJ Powell pounced on the loose ball for Merced and Thompson broke free for a 41-yard touchdown run on the very next play.

The Jaguars never gotten back within a pair of scores the rest of the way.

The Bears will try to carry the momentum into an intriguing matchup next week at a 2-0 Downey.