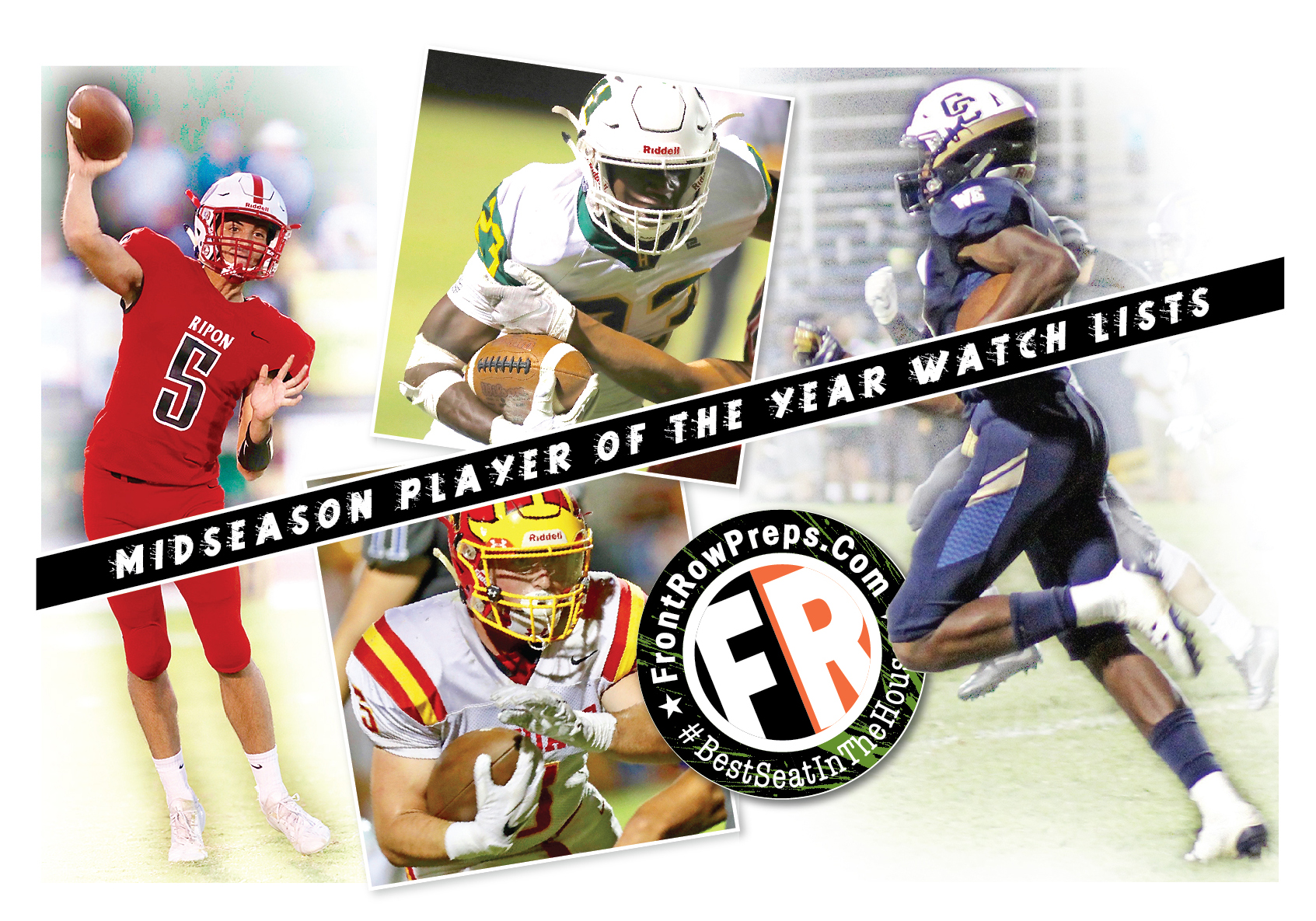 Who is the best football player in the region? Our player of the year watch list

The FrontRowPreps.com Player of the Year watch lists feature prolific dual-threat quarterbacks, running backs who blend speed and power and a nose for the end zone, and ball-hawking defenders.

These players have put their teams on their shoulders, giving life to Sac-Joaquin Section postseason and league title dreams with their consistent production, and many of them have already enjoyed a signature MVP moment.

There are two lists here — a large- and small-school honor roll — and the players are listed in alphabetical order. Remember, these are midseason watch lists and no awards will be handed out until after the season. We welcome feedback and dialogue, just as long as it is constructive and positive in nature. Feel free to email or message us on Twitter and Facebook, or comment on this story.

Payton Bass, Pitman: Bass is a game-changer for the unbeaten Pride, off to one of the best starts in school history and surging toward a Central California Athletic League title after a 24-6 victory over Gregori. Bass has 921 yards from scrimmage and ranks second on the team in rushing (579 yards) and receiving (342). He has a team-high 14 touchdowns, including nine on the ground.

Garrett Fountain, Turlock: The San Diego State-bound defensive end has been the Bulldogs’ most consistent player on what some believe is a generational-type of defensive unit. He leads the team in tackles and takeaways and sealed a pivotal Central California Athletic League victory over Downey with an interception in the waning moments. Fountain has 36 tackles, including 31 solo stops, and one sack. He has a team-high two interceptions and a fumble recovery.

Dawaiian McNeely, Central Catholic: Though he’ll likely fall short of his goal of 2,000 rushing yards because of an early injury and even earlier curtain calls in the Valley Oak League, McNeely is quietly building an MVP-caliber season. He leads the Raiders in rushing with 652 yards and kick return yards, including a 99-yard touchdown to start last week’s victory over Weston Ranch.

Jakob Partida, Pitman: The Pride are the only team with two players on the mid-season watch list. While Bass has been electric, the 5-foot-8, 135-pound Partida has been the workhorse. He tops the team in carries (106) and total touches (111), and leads the CCAL in rushing with 863 yards. His nine total touchdowns rank second on the team, trailing only Bass.

Max Moore, Oakdale: The senior fullback has been one of the fall's great surprises and a key reason why the Mustangs, with 22 new starters, find themselves right back in the hunt for the VOL title. Moore, a three-sport athlete with prospects behind the dish and varsity wrestling letter, has games of 184 and 190 rushing yards against Sierra and East Union, respectively, and 141 yards and two TDs in a victory over Chaparral of Colorado.

Marcus Ordunez, Pacheco: Ordunez is the darkhorse in the large-school bunch. A dual-threat quarterback, Ordunez is putting up ridiculous numbers in the region’s weakest large-school conference. Strength of the schedule is out of his control, though. All he can do is perform when the lights come on and he’s been a star for coach David Snapp. Ordunez has thrown for 987 yards and 11 touchdowns against just two interceptions. He has also rushed for 587 yards and 12 TDs.

Dhameer Warren, Merced: The Bears have maximized Warren’s many talents en route to a 7-0 start and the No. 2 ranking. The third-year varsity quarterback is completing 76 percent of his passes and has thrown 10 touchdowns without an interception. Warren has also rushed for 563 yards, and he’s scored touchdowns on interception (one) and kickoff returns (one), as well as designed runs (five). Warren is being recruited as a defensive back and has received serious interest from Arizona.

Ryan Daggett, Ripon: A third-year starter and accomplished track athlete, Daggett has guided the Indians to a 7-0 start and the region’s top ranking. He is on pace for more than 2,000 yards of total offense as his big arm and fast feet keep defensive coordinators on edge. He has thrown for 605 yards and eight touchdown, and rushed for a team-high 614 yards and nine more scores.

Javyn Drobnick, Big Valley Christian: Drobnick leads the section in rushing with 1,393 yards, and barring injury, will become the region's 16th member of the 2,000-yard club. He is averaging 199 yards per game and 10.2 yards per carry for the Lions, the Central California Athletic Alliance frontrunner. He has scored 13 TDs and set a school record with 376 yards in a season-opening victory at Harker of San Jose.

Michael Kamps, Ripon Christian: Kamps has scored 21 touchdowns, tied for the most in the section after eight weeks. He has 15 rushing touchdowns and six through the air, and showcased his versatility in one of the season’s biggest wins — a 23-17 seismic-shift over Orestimba. Kamps had 177 yards from scrimmage and two touchdowns as the Knights snapped the Warriors’ 23-game league winning streak. Kamps also has 26 tackles and two fumble recoveries.

Isaac Sharp, Hilmar: The reigning Merced Sun-Star player of the year has been the very definition of “explosive.” He leads the Trans-Valley League with 924 rushing yards and 13 touchdowns on just 71 carries. Read that again: Seventy-one carries. Sharp is also a threat in the passing game with 255 yards — fourth-best in the TVL — and three scores, including a 71-yard touchdown catch in a come-from-behind win at Escalon.

Michael Vivo, Waterford: In his third season, Vivo has developed into a dangerous weapon in the Wildcats’ up-tempo Spread offense. He has thrown for 1,198 yards and 13 touchdowns in six games. In his last three starts, Vivo has tossed eight TDs without an interception. He has also rushed for 587 yards and eight touchdowns, scoring at least once in every game. Vivo also has three picks and a punt return for a TD.