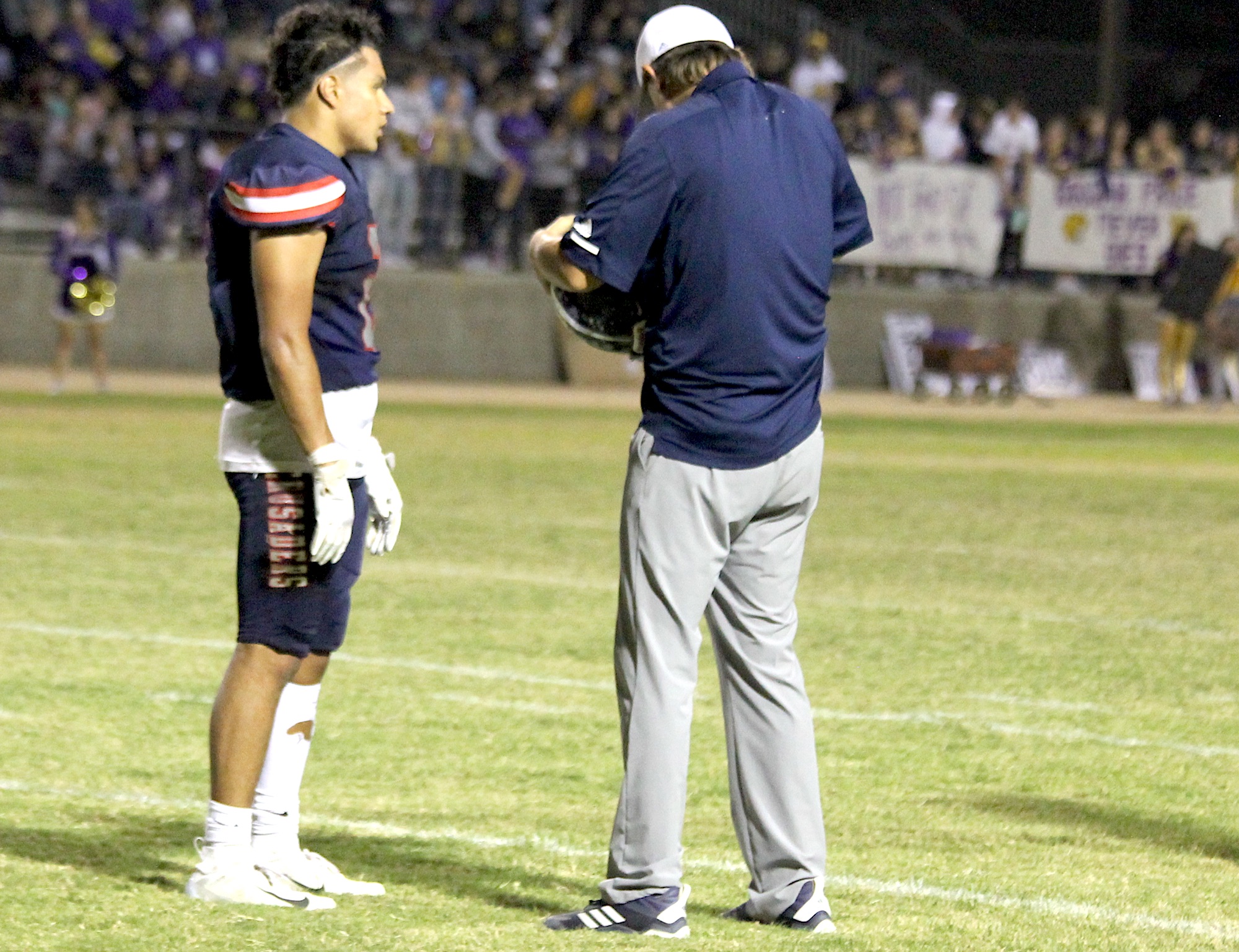 Modesto Christian senior Jose Hernandez (left) chats with an assistant coach during a 24-21 victory over Hilmar on Oct. 12, 2018. (Joey Santos)

'They love Jose, but they know what's at stake.' MC ready to rally around captain.

Modesto Christian football coach Mike Parsons loves the talent on his roster, but rarely in his career has the chemistry and camaraderie been this strong.

"This is one of those groups that is rare," Parsons said of his team, the top seed in the Sac-Joaquin Section Division VI playoffs. The Crusaders (10-1) host No. 4 Ripon Christian (11-0) on Friday. "I can count on one hand the number of groups like this."

For the second time this postseason, that bond may be tested by the absence of a two-way talent. Senior captain Jose Hernandez could miss Friday’s semifinal with a knee injury suffered during a 28-7 victory over Argonaut in the second round.

Hernandez had an MRI on Sunday. As of Tuesday afternoon, Parsons and his locker room were still anxiously awaiting the results.

“This is one of those groups. They’re ready to go,” said Parsons, whose program seeks is back-to-back trips to the D-VI final. “They love Jose, but they know what’s at stake. They’ll be ready. ... They’ll do it for him if they have to. Everyone will raise their game and get after it.”

Modesto Christian has been down this road before.

In Week 8, the Crusaders delivered an emotionally-charged 24-21 victory over Hilmar without national recruit Xavier Carlton, who was serving a one-game suspension. Carlton — a 6-foot-7 junior with offers from Notre Dame, USC and Oregon, among others — was ejected from the previous week’s game for an on-field altercation. Isaac Schinmann helped fill Carlton’s void with two touchdowns and 171 all-purpose yards.

Ironically, Schinmann was at the heart of the Crusaders’ latest rally. He sat out the game with Argonaut while recovering from a separated shoulder.

“We should have him back,” Parsons said of Schinmann, a starting running back and linebacker who was injured in a Week 10 loss to Ripon. “If we can get outside with all of this smoke, we’ll test his shoulder (with contact).”

On Friday, Modesto Christian will be ready to rally around another.

In a season of many heroes, Hernandez, a 5-foot-8, 165-pound senior, has been the Crusaders’ most versatile weapon. He leads the team in rushing with 903 yards and 12 touchdowns and then doubles as a hard-hitting safety. He has 46 tackles and two interceptions.

“He’s a free safety and calls all of our coverages, and he gets the rock more than anybody on our offense,” Parsons said. “He’s a huge part of what we do.”

Hernandez (12 of 15 on point-after kicks, 2 for 2 on field goals) also shares the kicking duties with his younger brother Mario Hernandez (22 of 26 PATs), who is a candidate to supplant his brother at safety.

“Mario is a hitter,” Parsons said. “He loves to stick his nose in there. He’s smart and can see what’s coming. I feel comfortable with Mario playing the QB role (in the secondary).”

While Jose Hernandez’s status remains up in the air, Modesto Christian will be without starting defensive end Sam Coon. The 6-foot-3 senior has a broken leg.

The injuries have only sharpened Modesto Christian’s focus. No. 4 Ripon Christian is playing up in division after winning the Southern League, but the unbeaten Knights aren’t sneaking up on the Crusaders.

Parsons believes Ripon Christian is similar to his 2006 team, which won its first 12 games and reached the Sac-Joaquin Section Division V final. Once there, the Crusaders lost to Central Catholic, 31-7.

“People were looking at us and wondering if they’re for real,” Parsons said. “A lot of people second-guessed us. ‘Could we keep it going?’ They (Ripon Christian) make me nervous because they’re coming up and playing well. It doesn’t matter that they’ve played in the Southern League. They’re 11-0 and that’s not easy to do.

“My kids are ready. We’re not looking past anybody.”