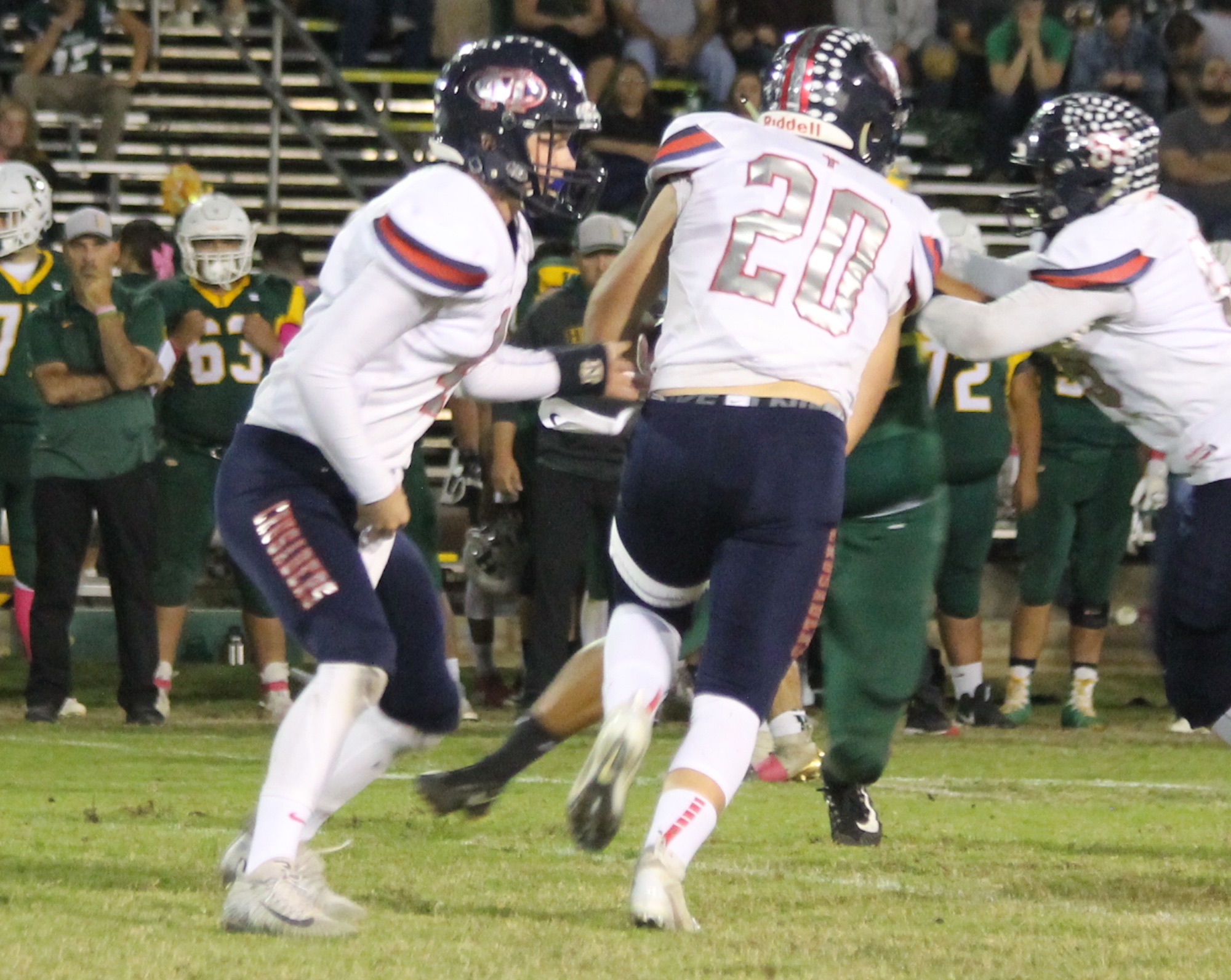 Modesto Christian's Hayden Sauser hands the ball off to running back Isaac Schinmann (20) during the Crusaders' 24-21 victory at Hilmar on Oct. 12, 2018. With the win, and Ripon's loss to Escalon, Modesto Christian becomes the new No. 1 in the small-school poll. (Joey Santos)

Modesto Christian new No. 1; Calaveras debuts in top-10 in time for MLL rivalry.

1. (2) Modesto Christian (9-0, 4-0): The Crusaders ascend to the top of the small-school poll for the first this season after edging Hilmar, 24-21. Isaac Schinmann scored two touchdowns and Dillon Johnson sealed the victory with a strip sack in the final minute. Next: Bye.

2. (5) Escalon (6-2, 2-2): Colten Panero and Kaden Christensen rushed for more than 100 yards apiece and Lucciano Dutra threw two touchdown passes as the Cougars spoiled Ripon’s bid at a perfect season. Next: vs. Livingston.

3. (1) Ripon (7-1, 4-1): The Indians fumbled on back-to-back possessions, resulting in 14 points for Escalon, and tumbled out of the No. 1 spot. The Indians can still force a share of the TVL title, but must win their final two games, including a Week 10 appointment with new No. 1 Modesto Christian. Next: vs. Hughson.

5. (3) Hilmar (6-2, 2-2): The Yellowjackets couldn’t recreate the same late-game magic against Modesto Christian that propelled them to victory at Escalon, fumbling inside field goal range with less than a minute left. Next: at Riverbank.

6. (6) Denair (7-1, 4-1): The Coyotes have won seven games for the first time since 2006 and will be overwhelming favorites in their final two Southern League games. Denair has never won more than eight games in the MaxPreps era. Next: at Mariposa.

7. (7) Sonora (4-4, 3-0): After an 0-4 start, Sonora is starting to look like the team many believed would be the best among in the small-school division. The Wildcats have won four straight games and can clinch at least a share of its fifth straight MLL title this week. Next: at Calaveras.

8. (8) Orestimba (5-3, 3-2): The Warriors snapped a two-game losing streak with an aerial assault in Waterford. Jacob Bettencourt threw six touchdown passes, including four to senior Tyler Vargas. Next: at Delhi.

9. (nr) Calaveras (5-3, 3-0): The hottest team in the Mother Lode, Calaveras has won five consecutive games and will play for a piece of the MLL title on Friday. Clayton Moore and Jarrod Biondi rushed for more than 100 yards apiece in a 26-6 victory over Argonaut, according to the Calaveras Enterprise’s Guy Dossi. Next:

10. (10) Big Valley Christian (7-1, 4-0): The Lions rolled to a 53-0 victory over Delta Charter on Saturday — their third shutout in four CCAA games — and can clinch up at least a share of the CCAA title with a victory this week: Next: at Brookside Christian.