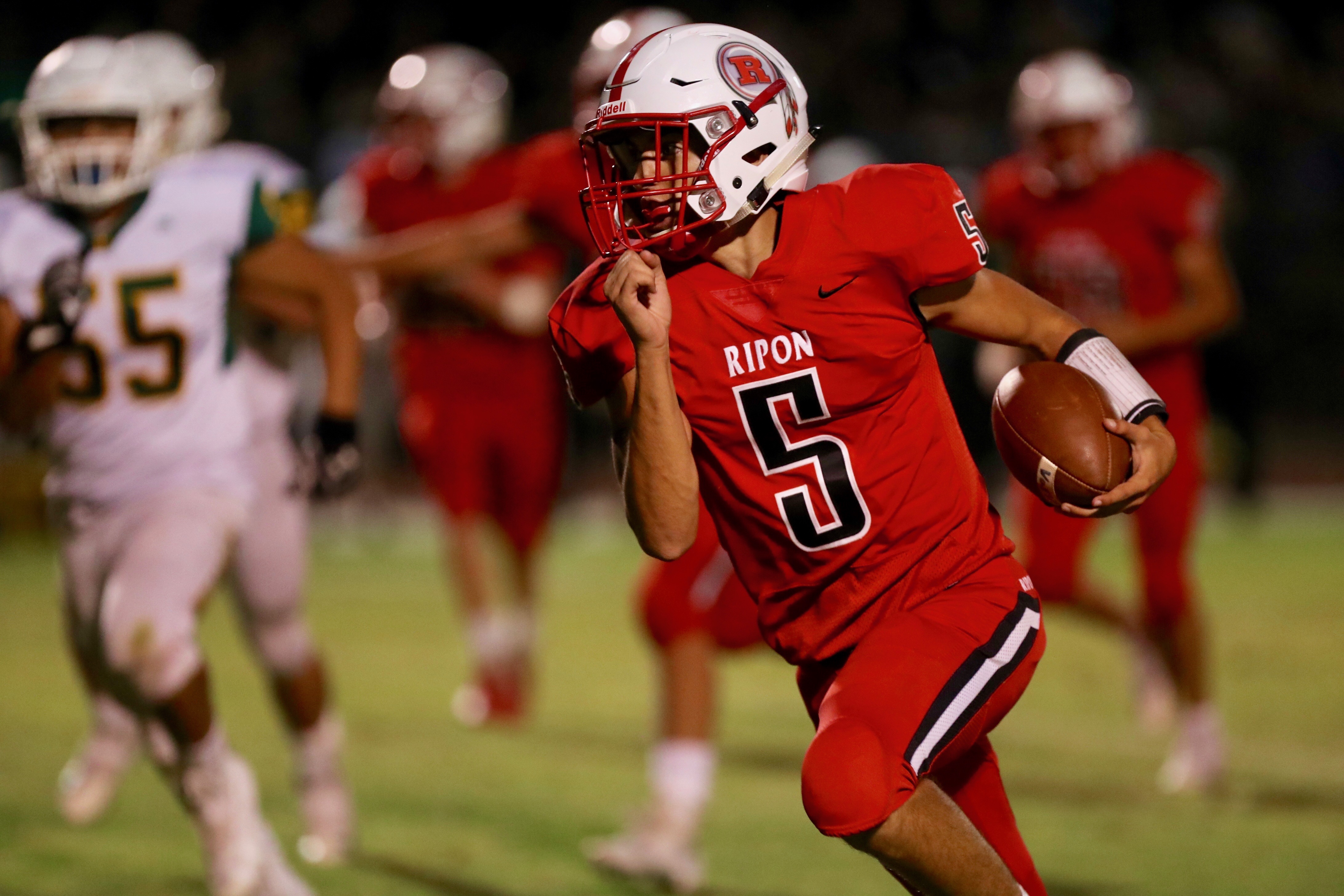 Ripon quarterback Ryan Daggett needs to engineer a victory against No. 1 Modesto Christian on Oct. 26, 2018, to earn a share of the Trans-Valley League title. (Wayne Thallander)

3. (3) Ripon (8-1, 4-1): In his final regular-season home game, three-year starter Ryan Daggett put on a show. He completed 9 of 11 passes for 193 yards, and rushed for 74 yards and another score in a runaway victory over Hughson on Senior Night. With the win, the Indians remained in the TVL title hunt. Next: at Modesto Christian.

4. (4) Ripon Christian (9-0, 6-0): The Knights clinched at least a share of their first Southern League title since 2012 with a victory over Le Grand last week. Now Trey Ozenbaugh’s thin-but-explosive bunch takes aim at the outright crown and a perfect regular season. Next: vs. Delhi.

5. (5) Hilmar (7-2, 3-2): The Yellowjackets bounced back from their loss to Modesto Christian with a 56-6 victory over Riverbank. Hilmar rushed for 305 yards and six touchdowns. Next: vs. Livingston.

6. (6) Denair (8-1, 5-1): The Coyotes can set a school record for wins in the MaxPreps era with a victory over reeling Waterford, which has lost two straight. Denair is doing it with defense, too. It has allowed just 13 points the last two weeks. Next: vs. Waterford.

7. (7) Sonora (5-4, 4-0): The Wildcats picked up their first win against a top-10 program with last week’s 21-7 victory at Calaveras. With its fifth consecutive victory, Sonora, once 0-4 and searching for answers, clinched at least a share of its fifth straight MLL title. Next: vs. Summerville.

9. (10) Big Valley Christian (8-1, 5-0): Javyn Drobnick and the Lions clinched at least a share of the CCAA crown with a 42-18 victory over Brookside Christian. Drobnick, the section’s leading rusher, gashed the Knights for 343 yards and four touchdowns. Next: vs. Sierra Ridge/ROP.

10. (9) Calaveras (5-4, 3-1): Calaveras had its four-game winning streak snapped by MLL rival Sonora and needs a win this week to enhance its playoff seeding. Next: at Bret Harte.