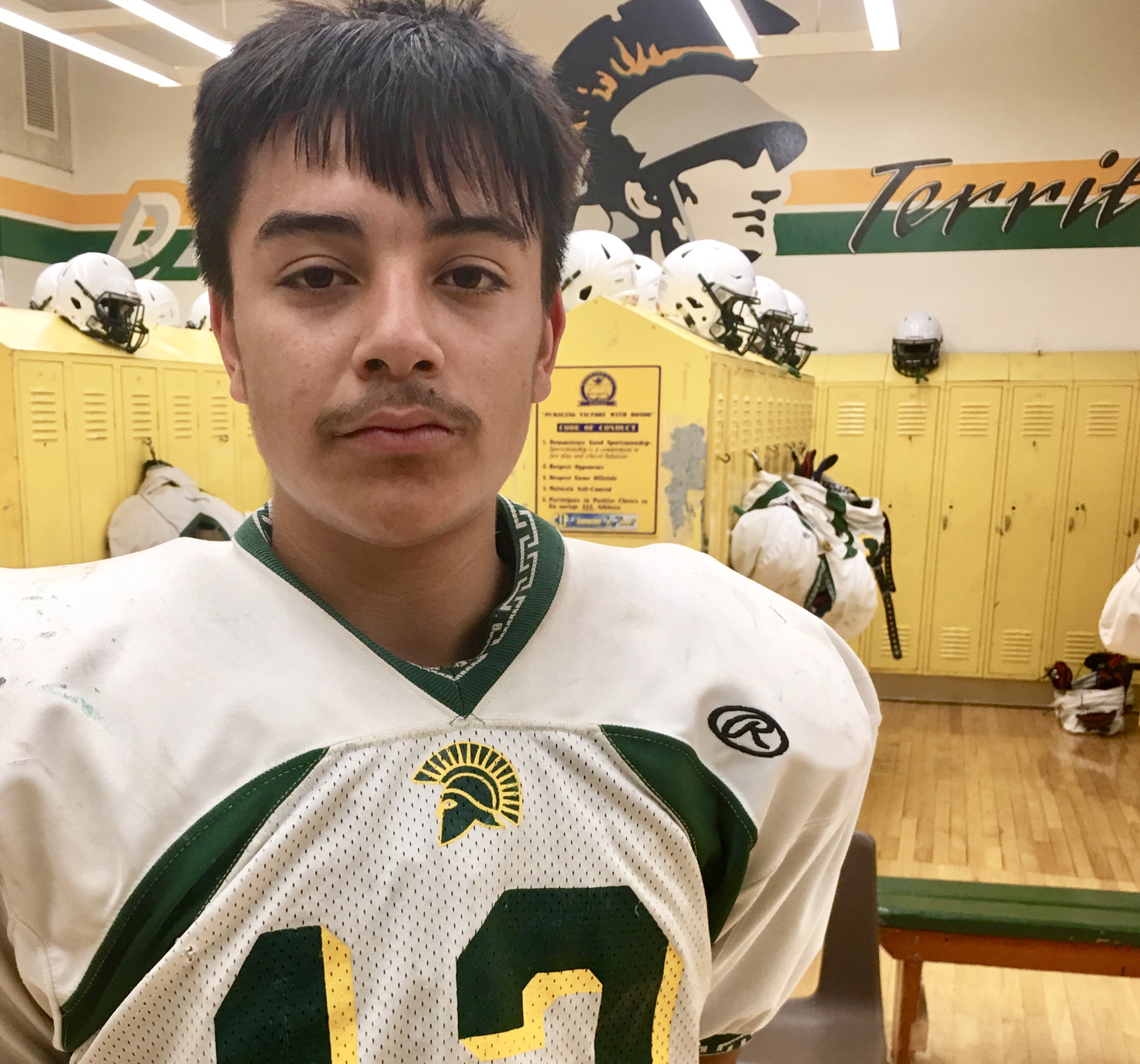 Davis High quarterback Elijah Diaz will try to lead the Spartans to a victory over crosstown rival Beyer in a key Western Athletic Conference game on Thursday night at Gregori's Don Lanphear Stadium.

MODESTO – When the Modesto Metro Conference broke up and Beyer, Grace Davis and Johansen were realigned into the Western Athletic Conference last season, they hoped it would still bring special moments into the city.

“It couldn’t be better for Modesto,” said Beyer first-year coach Greg Bockman during Tuesday’s meeting of the Modesto Quarterback Club.

Beyer has rebounded, to say the least, from its 0-10 season in 2018. Darius Murphy, one of about a dozen difference-making sophomores, scored four touchdowns during the Patriots’ 47-0 victory over Mountain House last week.

Defense has carried Beyer. Seniors Jalen Munoz and Leshun White and sophomore Zach Perkins anchor a unit that has allowed only 10.5 points per game.

Quarterback/middle linebacker Elijah Diaz, one of the honorees for the Spartans’ upcoming Senior Night,  leads Davis. The Spartans average more than 36 points a game, which sets the scene for a showdown against the Beyer defense.

“I’m very proud of our seniors and how far they’ve come since they were freshmen,” Davis coach Tim Garcia said.

Beyer leads the WAC, but Los Banos, Johansen and Davis lurk a game behind. Johansen, (5-2, 3-1), which welcomes Lathrop on Friday night, was beaten at Los Banos 34-33 when the Vikings’ bold two-point bid for victory failed with 40 seconds left.

“Losing has to hurt more than winning feels good. The pain after losing a close battle was huge,” Johansen coach Scott Sacuskie said. “It will be an interesting finish. The road to the WAC title goes through the three of us (Davis, Beyer and Johansen)."

QB CLUB NOTES – Minaya Olivo, one of seven QB-club special guests from Central Catholic, turned in a freakish stat-line during the Raiders’ 62-6 win over Weston Ranch: Three carries for 208 yards and three touchdowns. The Raiders (4-4, 4-0), who lead the Valley Oak League race, went bowling over the weekend and raised $2,100 for Autism Speaks.  They’re off this week. “I like where we’re at. We’re in the driver’s seat,” CC coach Roger Canepa said. “We suffered five injuries during our (season opener) and we’re getting healthy.”…

Enochs (4-3, 1-1) will celebrate Senior Night during Friday night’s Central California Athletic League game against Turlock at Gregori. The Eagles extended Downey last week before falling 56-40 despite three touchdown passes by senior Ben Harless. Meanwhile, Downey (4-3, 1-1) won for the first time in about a month.  “We’re starting to get guys back on the field (after injuries),” Downey coach Jeremy Plaa said. Bryce Gouker passed for 465 yards and four touchdowns against Enochs and Robert Rivera, one of the Knights bouncing back from injury, scored seven touchdowns, four rushing and three on receptions. Rivera was named the Northern California Offensive Player of the Week on Tuesday by Cal-Hi Sports. ...

Gregori (5-2, 2-0), winner of three straight after last week’s 28-16 victory over Pitman, travels to Downey (4-3, 1-1) for a pivotal CCAL matchup Friday night. … Modesto, (1-6, 0-2), which lost at Turlock 45-0 last week, returns to the same venue to face Pitman. “The theme for us this week is choice,” first-year coach Dylan Miller said. “You’re choosing to push yourself to be better.” … Big Valley Christian drew its largest-ever home crowd, estimated at about 1,500, last week for its 55-7 homecoming cakewalk over Millennium. The Lions improved to 2-0 in the Central California Athletic Alliance and 4-3 overall, heading to Friday night’s non-league trip to South Lake Tahoe. …