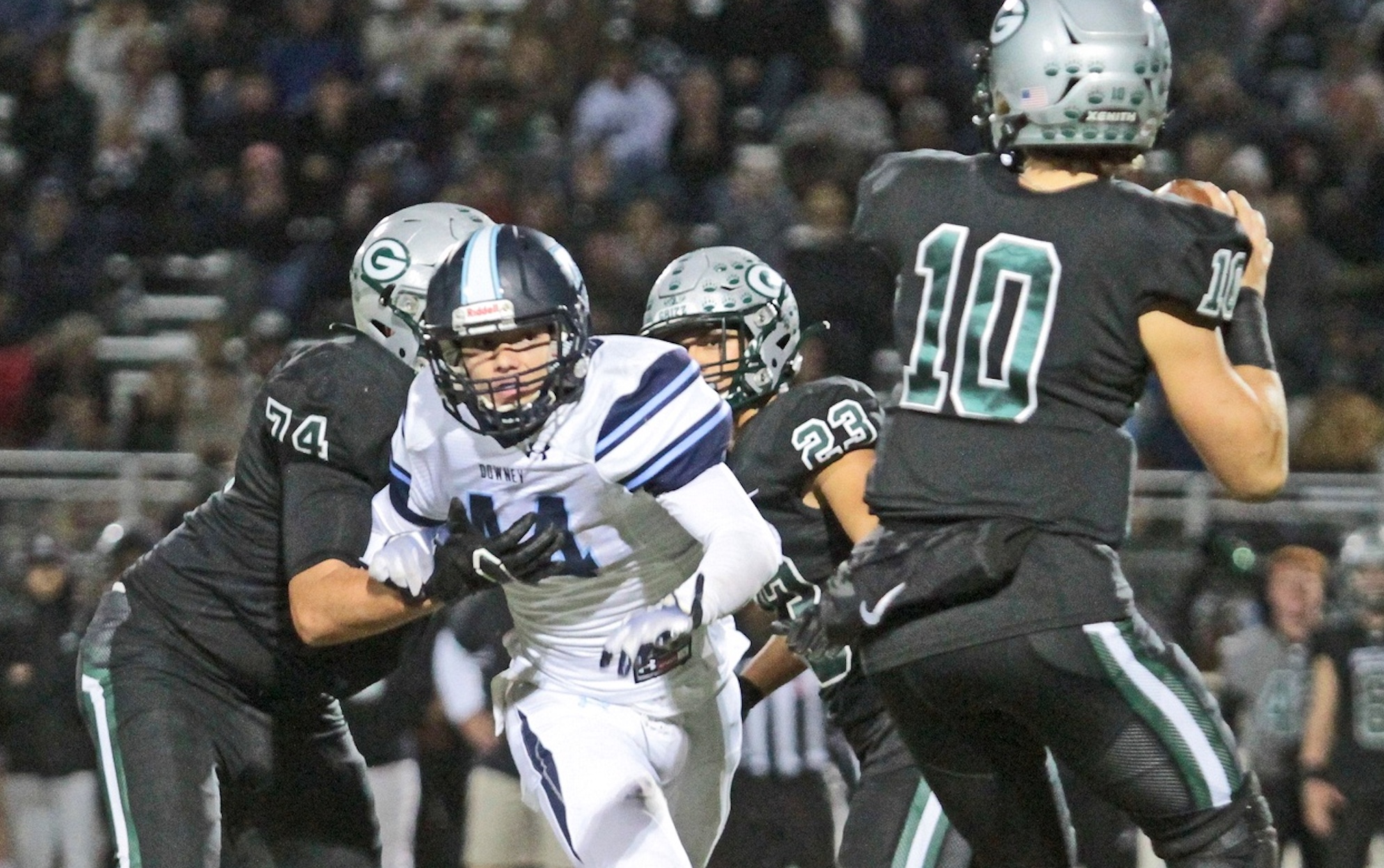 Granite Bay quarterback Dillon Hamilton stares down the rush of Downey's Paul Roe during a 30-22 victory in the first round of the Sac-Joaquin Section Division II playoffs. (Daniel Harris Photography)

Modesto QB Club: Downey loss at Granite Bay was 'been here, done that'

MODESTO – The Downey High Knights made the long bus ride to Granite Bay on Friday afternoon on what turned out to be the final game of their season.

The trip resulted in a 30-22 playoffs loss and another difficult night for the Knights against a Sierra Foothill League opponent. Jeremy Plaa closed his 13th season as the Downey coach with a familiar disappointment.

Downey has qualified for the Sac-Joaquin Section tournament the last nine seasons but, during that otherwise successful run, has recorded a post-season record of 3-8.  A further breakdown is more grim: Downey is 1-6 vs. the SFL – one of the section's top conferences – and 0-3 vs. Granite Bay.

The Knights have been the home team only three times since 2011. Plaa believes his teams in general deserve a better fate from tournament officials.

“I’m not looking for a handout,” Plaa said Tuesday afternoon after the season’s final meeting of the Modesto Quarterback Club. “I feel like we need a little bit of luck in the playoff draw. We never get it.”

Downey (7-4) was seeded 10th in Division II by the section committee and was tasked with a road game against the 5-6 Grizzlies. The Knights had their chances. Senior quarterback Bryce Gouker threw three touchdown passes – he finished the season with 37 TDs against only four interceptions – and the game was tied 14-14 at halftime.

Granite Bay took the lead to stay midway through the third quarter, and Downey took home another playoff loss. Last week, Plaa called attention to perhaps the essential point: The Knights won’t earn the nod from the committee until they win more playoff games.

“We get knocked for losing in the first of second round. We’re not bombing in the playoffs or laying an egg. We’re playing good football,” Plaa said. “The section does a good job of dividing by enrollment. But at the same time, I think there’s got to be a little competitive equity thing built into it.”

Plaa pointed to his team’s regular-season victories the last two years over Manteca, seeded fourth in Division III. The Downey coach thinks his program is a better fit in that division.

Plaa believed Gouker, the latest of a long line of productive Downey quarterbacks, had “probably the most accurate season of any quarterback I’ve had.”

QB CLUB NOTES – Nine members of the Modesto Junior College Pirates were special guests of the QB Club. MJC (7-2) improved to 3-1 in the Valley Conference last weekend with a 35-10 road win over Sacramento, a bounce back after the Pirates’ tough loss against Fresno. MJC stayed in contention for an at-large berth in the NorCal playoffs and, regardless, will advance to the postseason for the 12th time in the last 14 years. But there is unfinished business – a regular season-ending game at home Saturday night against Delta. Modesto hasn’t lost to the Mustangs since 2015. Kickoff is at 6 o’clock. …

Central Catholic (6-5) travels to Carmichael for a second-round D-II game against Jesuit on Saturday afternoon at 1 o’clock.  The Raiders, who tied for the Valley Oak League title with Manteca and Oakdale, featured six touchdowns by sophomores – three by Lyon Colon in the first quarter – during their easy 58-14 win over Tracy.…

Four scoring chances netted only seven points for Gregori during its 41-7 loss to Davis of Yolo County in D-I. The Jaguars (6-5) trailed 20-0 after the first quarter against the Delta League-champion Blue Devils.  “This group laid down the foundation of what we want to do at Gregori,” coach Lamar Wallace said. … Sean Perkins, the last healthy running back, rushed for a 20-yard touchdown late in Beyer’s 20-6 D-IV loss at Merced. The Patriots (7-4), the Western Athletic Conference champions, hurt themselves with five turnovers. …

Big Valley Christian’s season ended with a 41-21 loss to LeGrand in DVII. The Lions (6-5), who’ve won the Central California Athletic Alliance title the last two seasons, trailed 14-0 after the first two minutes. “We just couldn’t get out of our own way,” coach Brian Berkefeld said.