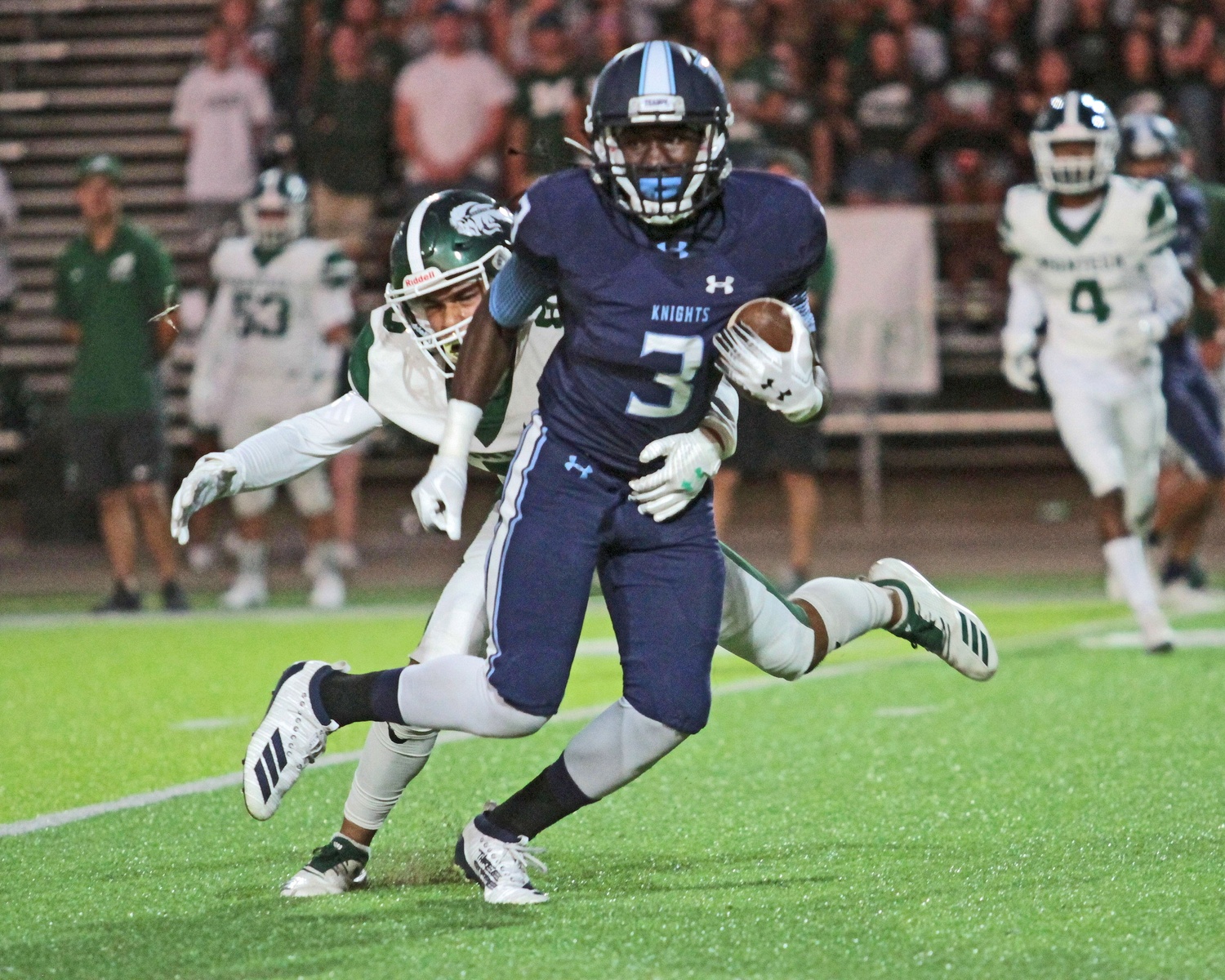 Lawrence Harris had nine catches for 264 yards and five touchdowns, but it was his interception in the end zone in overtime that proved to be one of the biggest plays of the game. (Daniel Harris Photography)

MODESTO – Downey High’s Lawrence Harris complained about an upset stomach – something about the jalapeno peppers in the pasta – during the Knights’ pre-game meal last week.

Turns out those peppers weren't such a bad idea.

“I told him for the rest of the season he’ll be having jalapeno peppers before the game,” Downey coach Jeremy Plaa said.

Ill or not, Harris enjoyed his career night during Downey’s pulsating 54-48 victory over Manteca. All he did was catch nine passes for 264 yards and five touchdowns, but he added a clutch play on defense – his end-zone interception in the overtime that preceded Robert Rivera’s short dive for the game-winning touchdown.

Downey, 2-0, celebrated a thrilling victory that has made the Knights one of the early talking points of the 2019 season. They also are FrontRowPreps.com’s choice as the Yogurt Mill Team of the Week.

Harris, a 6-foot 170-pound senior, has given the Knights an electric start. He already was known as a skilled athlete, illustrated by his qualifying for the CIF Track and Field Championships last spring after he cleared the automatic qualifying mark of 6-4 at the Sac-Joaquin Section Masters.

“Lawrence is a great kid,” Plaa praised after Tuesday's meeting of the Modesto Quarterback Club. “He does exactly what his coaches want him to do and he just works hard.”

Downey, which rallied from a late 14-point deficit, forced three straight stops on defense which led to three straight touchdowns to survive the shootout against the talented Buffaloes. It also marked the Knights’ second straight win over Manteca.

“We have enough receiver athletes that defenses try to take away some guys and that opens up other opportunities,” Plaa said.

Gouker already has totaled 11 touchdown passes against only one interception, a mistake late in the first half against Manteca.

Downey will take its unbeaten record Friday night to Merced, which is 1-1 after its 27-21 double overtime loss to Gregori.

QB CLUB NOTES – Isaac Herman’s timely interception keyed Gregori’s victory, the first for head coach Lamar Wallace. Gregori welcomes Beyer to Don Lanphear Stadium on Friday night. … Beyer’s 20-14 win over Modesto was its first since the Panthers’ 20-0 decision over Enochs in October of 2017, 12 games ago. First-year coach Greg Bockman said a switch to quarterback Sam Betencourt in the fourth quarter was instrumental in the streak-breaking win.  The Patriots limited Modesto to only 46 rushing yards. … Modesto, 0-2, gets the week off. “I’m actually grateful to open up the hood and go back to work,” first-year coach Dylan Miller said. … Modesto Junior College opens its season Friday night on ther oad against reigning state champion Laney of Oakland. The Pirates, 10th in state pre-season rankings, will feature quarterback Danny Velasquez, a star for MJC in 2017. Velasquez bounced back after a year at Portland State. MJC comes off a remarkable 28-20 bowl-game victory over City College of San Francisco, Modesto’s first over the Rams in six decades. The Rams beat the Pirates 49-16 earlier last season. … Central Catholic assistant coach Billy Hylla praised the Raiders for not giving up, though they trailed 42-0 early in the third quarter during their 49-14 loss at home to De La Salle. There’s no letup in the schedule for CC (0-2), which travels to Stockton for its annual Holy Bowl game against St. Mary’s. “We should be getting some guys back in the next one or two weeks,” said Hylla in reference to the Raiders’ many injuries. “The timeline is Manteca (the Valley Oak League opener on Sept. 20). … Hylla also cited the play of two-way starter David Gallegos, who’s logged about 85 percent of the snaps.He was a kicker until this season. … Johansen’s game at Delhi was delayed one hour until the paramedics arrived. “We sat in the shade waiting,” coach Scott Sacuskie said. The Vikings, 2-0, then coasted to a 41-6 win, and celebrated the next day with a team trip to watch Stanford and Northwestern at Palo Alto. … Enochs athletic director Randy Rubio, subbing for coach James Stacy, called attention to running back Christian Cervantes, who carried 16 times for 169 yards during the Eagles’ 32-14 win over West. Quarterback Ben Harless completed nine of 12 passes for Enochs, which seeks a 3-0 start Friday night at McNair. … Big Valley Christian, 1-0, returns from a bye week on Friday night at home against Le Grand. … Quarterback Elijah Diaz is the No. 1 reason for Grace Davis’ 2-0 start. Diaz accounted for five touchdowns, four passing and one rushing, during last week’s 49-0 rout of Franklin. The Spartans face El Capitan on Friday night. … Bad news: Terry Hobart, Lanphear’s first quarterback at Grace Davis (1978), died recently.