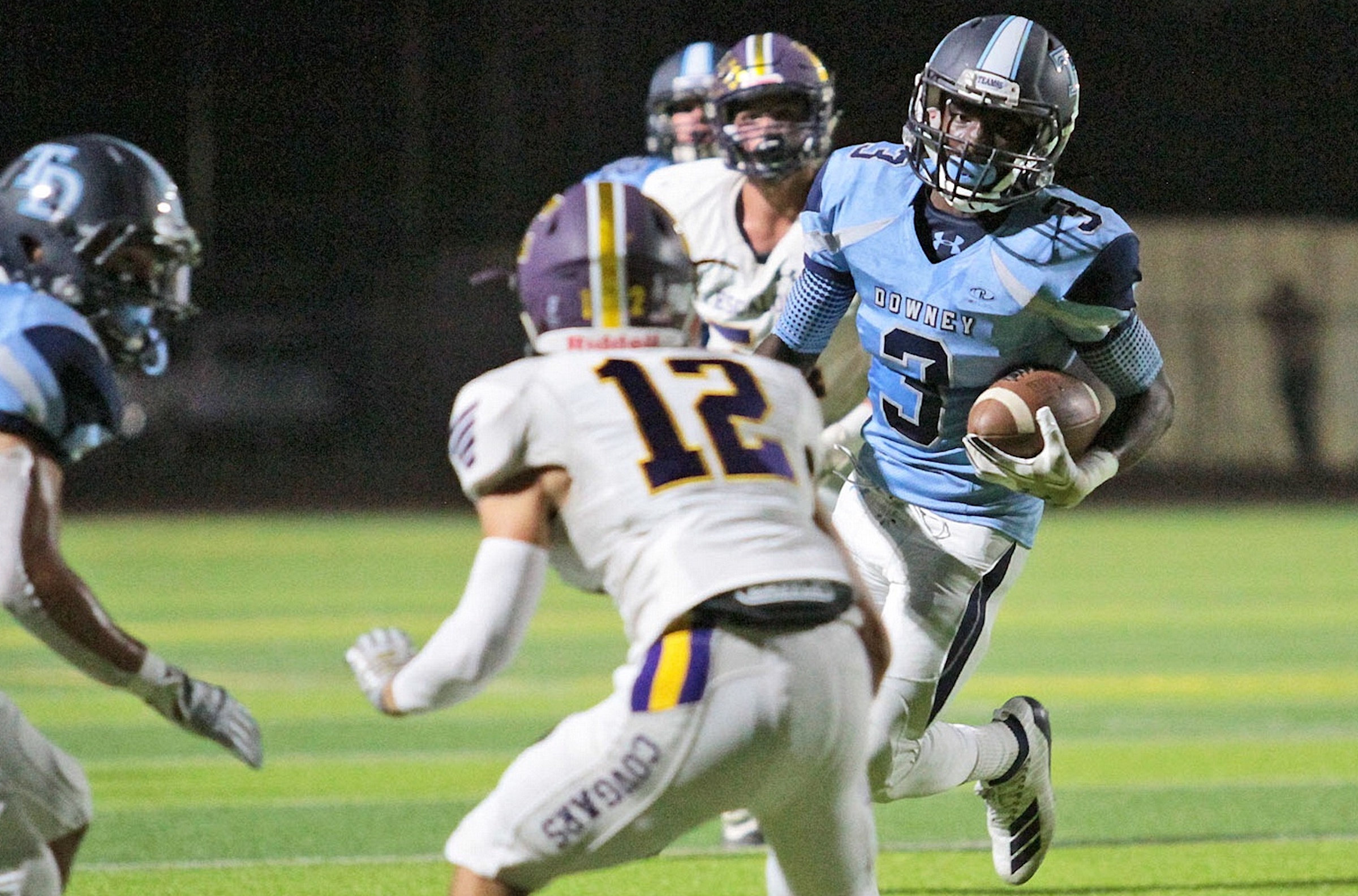 The No. 1 priority – how the Knights respond.

“It was a lesson learned in some regards,” said Downey offensive coordinator Chris Cloward, who subbed for head coach Jeremy Plaa at Monday’s meeting of the Modesto Quarterback Club.

“We have to have a short-term memory,” Cloward continued. “We still have a lot of football left.”

Downey (3-1) hopes to bounce back Friday night at McClymonds of Oakland (3-0), which defeated the Knights last year 21-14.  That said, the Knights’ confidence took a hit on homecoming night against an aroused guest.

Escalon (4-0), one of the powerhouses of the Trans Valley League, didn’t look, act or play much like an underdog. Their punishing Wing-T, an attack Downey seldom sees, controlled the game from the kickoff. Officials wound the clock to hasten the game’s end.

Defensively, Escalon fell back into zone coverages and dared Downey to run. The Knights could not spring running back Robert Rivera, nor did they ignite their prolific passing game. Lawrence Harris’ two touchdown catches were among few good moments.

“Homecoming…didn’t help. We had to be more focused against a really good Cougar team,” said Cloward, a Modesto coaching veteran of nearly 20 years and the former head coach at Grace Davis. “That they were scoring at will deflated us in some ways. And Escalon tackled well. Their philosophy is to get on top and grind it out. That’s what they did to us.”

The Knights will treat their bus ride to the East Bay as “a bonding trip,” Cloward said. “We’re going to re-gather and see what we have.”

QB CLUB NOTES – Modesto Junior College (2-0), an impressive 50-20 victor over Sierra, expects City College of San Francisco’s best game Saturday night at MJC Stadium.  The Pirates upset the Rams 28-20 in bowl action last year. It was MJC’s first victory over San Francisco in 62 years but, more important, an emphatic answer to the Pirates’ 49-16 loss to the Rams in mid-September. “They’ll be excited to play us,” MJC coach Rusty Stivers said. The Rams are 2-0 after they blanked Sacramento 47-0. … The Pirates are ranked seventh, one spot ahead of CCSF, in this week's JC Athletic Bureau's coaches poll ... Brandon Gray was credited with the diving 20-yard touchdown catch from Brett Neves, who received a lateral from quarterback Danny Velasquez, against Sierra. That gave Gray three touchdown receptions and 108 overall yards. …

Central Catholic (0-4) moved the ball better during its 49-27 loss last week at Upland. Lyle Colon, one of the sophomores called up to the injury-mangled varsity, rushed for 137 yards and has topped the 100-yard mark the last two games. The Raiders hope to have Minaya Olivo, who missed last weeks’ game (concussion), back for their Valley Oak League opener at Manteca (3-1). Central Catholic is 5-0 vs. Manteca since the Raiders joined the VOL in 2014. …CC assistant coach Myron Larson praised Upland senior Justin Flowe, who affirmed his status as one of the nation’s top prep linebackers. Flowe forced three fumbles during the game. “He lived in our backfield,” Larson said. …

Johansen (2-1) showed its overall improvement during a hard-fought 20-13 loss at 3-1 East Union. The Vikings had a chance to tie late in the game. “We’re no longer the underdogs. We have the size,” coach Scott Sacuskie said. Johansen opens Western Athletic Conference action at home against Pacheco (1-2). … Beyer (1-2), coming off a bye, was weakened by a flu bug last week, according to coach Greg Bockman. The Patriots begin the WAC season Friday night at Los Banos (0-3) … Grace Davis takes a 3-0 record into its homecoming game against Mountain House (0-3). The WAC opener for both teams will be contested at Gregori . … Modesto celebrates its homecoming Friday night against Franklin of Stockton in a matchup of 0-3 teams. The game will be played at Downey. Last week, the Panthers trailed 35-0 at halftime en route to a 35-15 loss to Patterson …

Gregori (2-2) labored through a mistake-filled 26-21 loss last week at McNair. The Jaguars stay on the road this week against 4-0 Livermore. … Enochs (3-1) rallied from a 14-0 halftime deficit but yielded a fourth-quarter touchdown to lose to Central Valley 21-14 last week.  Christian Cervantes carried 23 times for 181 yards for the Eagles, who are off this week. … Big Valley Christian (1-2) dropped a 28-27 thriller to Waterford, though Andrew Contreras scored three touchdowns. Coach Brian Berkefeld said the Lions, who travel to Woodland Christian this week, hope for the return of injured running back Javyn Drobnick for the start of Central California Athletic Alliance action in a few weeks.