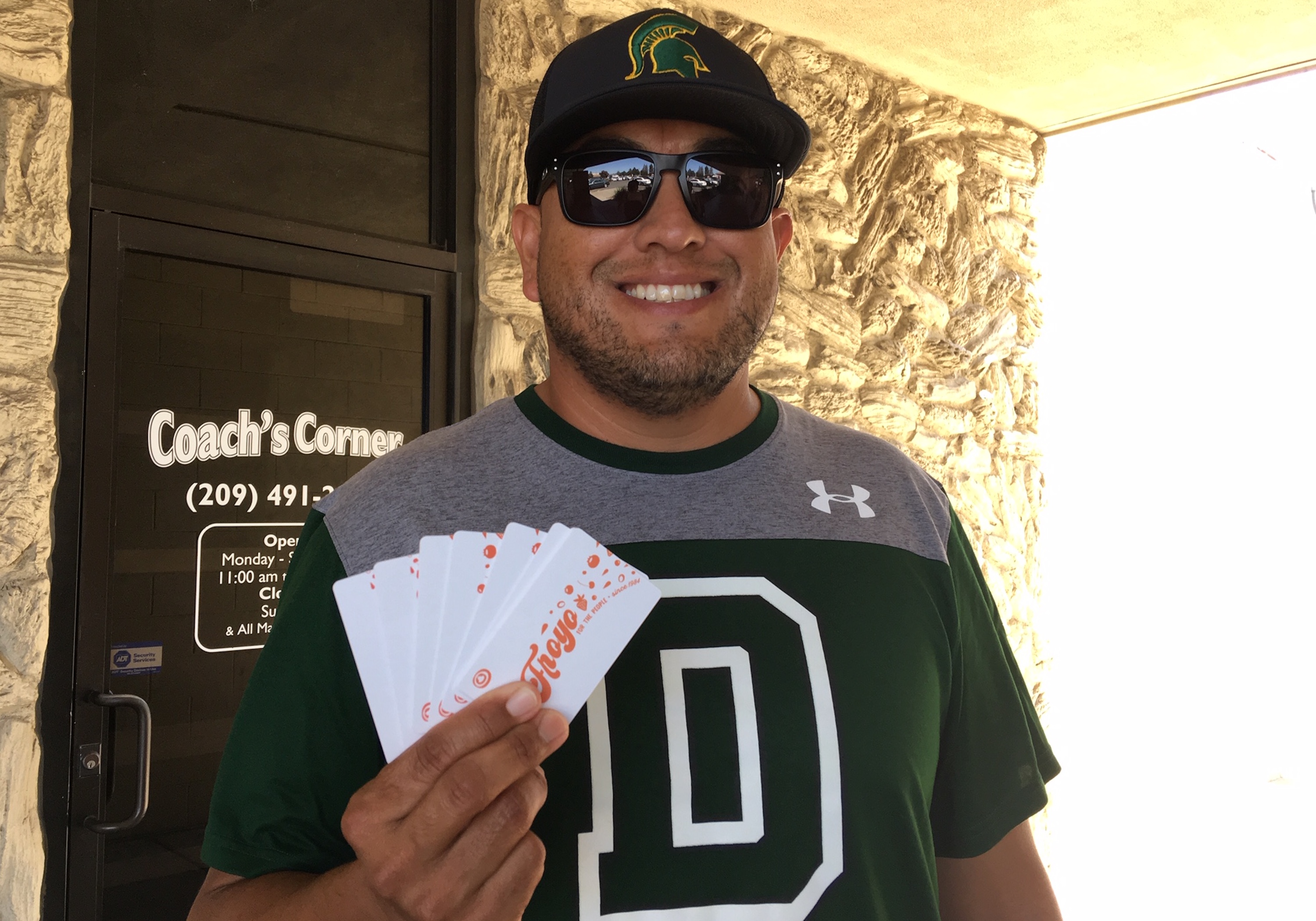 Diaz, a senior, anchored the Spartans’ comeback from a 13-0 halftime deficit to stop Ripon Christian, a 2018 Sac-Joaquin Section Division VI finalist, 20-19 Friday night. That rally made the Spartans the Yogurt Mill Team of the Week by frontrowpreps.com

“Elijah is a real good kid when the lights come on,” Davis coach Tim Garcia said after Monday’s meeting of the Modesto Quarterback Club. “He’s a smart football player, tough, athletic and a leader. He brings another dynamic for us with our spread offense.”

Diaz no doubt slept well after the ride home from Ripon. He completed 10 of 17 passes for 190 yards and two touchdowns, rushed 18 times for 102 yards and, as a middle linebacker, logged nine tackles.

His best play, however, put Davis ahead to stay during the fourth quarter. Diaz, seeing single coverage against wide receiver Gregory Smith, checked into a pass play and hit Smith for the clutch 60-yard touchdown strike.

“Elijah was definitely the X-factor. He played better as the game wore on, and by the third and fourth quarter he was dominating,” Garcia said. “We also played well on defense and that gave us a chance in the end.”

Garcia also copped to a little good fortune. Ripon Christian’s halftime lead would have been larger if not for an inadvertent whistle and a dropped touchdown pass. A quick second-half touchdown changed the game’s tenor. The Spartans somehow negated RC’s size advantage up front just enough to stay in the game.

“We got lucky and we’ll take it,” he said. “You know how football is. You gotta get lucky every once in a while.”

Davis again hits the road Friday night against Franklin of Stockton, which was beaten by Linden 43-6 last week.

QB CLUB NOTES – Central Catholic’s depth issues worsened during its tough 35-32 loss to Clovis West, the Raiders’ first loss on opening night in nine years.  Players who will miss Friday night’s highly anticipated home game against heralded De La Salle include receiver-linebacker Phoenix Jackson (hip flexor), linebacker Antonio Cardenas (hamstring) and quarterback Kyle Jackson (shoulder). The most serious of the injuries appears to be to Phoenix Jackson, who fell after he intercepted a pass. Assistant coach Myron Larson also lamented eight false-start penalties and a slew of cramping in the hot weather. The lack of depth will force CC to bring up five sophomores for the De La Salle game. Clearly, the Raiders must beef up their roster with punishing games ahead against the Spartans, St. Mary’s and Upland. De La Salle opened with a 24-14 loss to St. Thomas Aquinas of Fort Lauderdale, Fla., ranked No. 1 in the nation by USA Today. ....

Modesto first-year coach Dylan Miller  appeared at the quarterback club for the first time since 2005 – when he played for the Panthers. Modesto, beaten by Clovis 49-0 last week, meets Beyer on Friday night at Johansen. The Patriots were beaten 28-6 by Enochs, as the Eagles gained a 7-6 lead over Beyer in the annual Sylvan Bowl game. “All week long, social media was going mad,” Enochs coach James Stacy said. “I told the team, ‘Talk with your pads.’” The Eagles meet West at Tracy on Friday night. …

Gregori will work on special teams this week after the Jaguars allowed a punt return and a kickoff return by Buhach Colony’s Youlas Dickson III for touchdowns during their 34-13 loss. Coach Lamar Wallace, who made his head-coaching debut, noted running back Titus Rhiney’s 143 rushing yards and two touchdowns. The Jaguars welcome Merced to Don Lanphear Stadium on Friday night. …The only thing that stopped Big Valley Christian Saturday against Riverbank were the sprinklers which sprouted  with about a minute left. The officials stopped the game, an easy 42-0 win for the Lions. Javyn Drobnick rushed for 213 yards and three touchdowns (one of them a punt return) and fullback Joshua Stubbert added 173 yards and two TDs. … Johansen’s inflatable “tunnel” couldn’t hold air, but the Vikings will take their 44-21 win over Waterford and repair the tunnel later. It was Johansen’s first season-opening win since 2005. Jesse Arriola, making room inside the tackles, carried 13 times for 127 yards to lead a rushing attack that produced 337 yards.