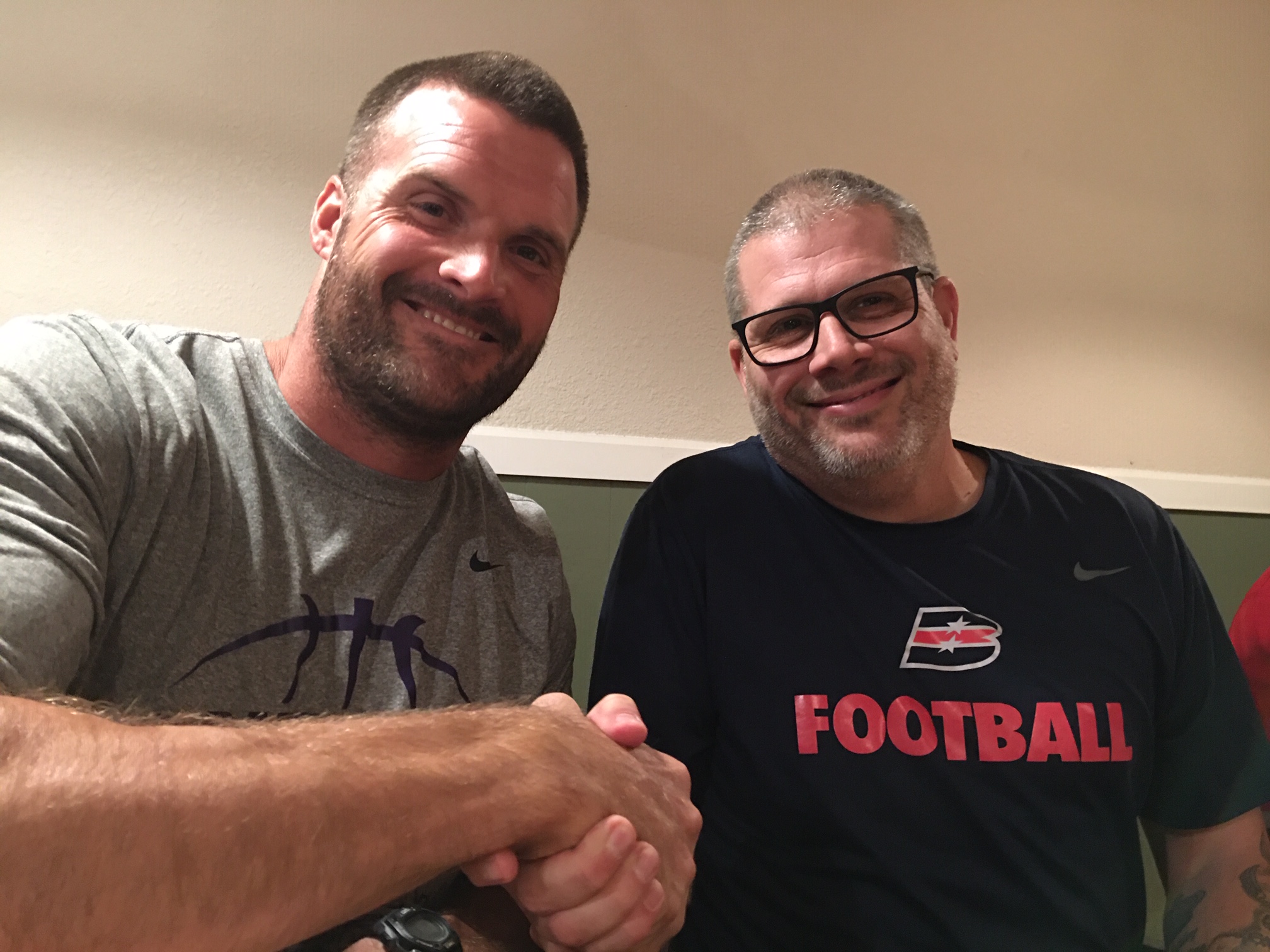 MODESTO – The regular season ends Friday night with a high-stakes game matching up Cinderella vs. Cinderella.

The Beyer High Patriots (6-3, 5-1), 0-10 a year ago, meet the Johansen Vikings (7-2, 5-1) whose teams won only three games between 2012 and 2017, for at least a share of the Western Athletic Conference title. And if that wasn’t enough, the winner advances to the Sac-Joaquin Section playoffs while the loser likely is out.

“I feel like I’m 60. I’m only 39,” Sacuskie told a packed room Monday at the Modesto Quarterback Club's weekly meeting. “We’ve been winning by only one score. My kids know how to make it exciting.”

Sacuskie, the Vikings’ fourth-year coach, has rebuilt the program from the bottom. He’s called attention all season to the team’s 23 seniors for doing the dirty work, when transferring to another school would have been an easy escape.

Two of those seniors, quarterback John Romero and receiver Tiernan Collins, connected for touchdowns during Johansen’s exciting come-from-behind 21-14 victory last week over Grace Davis. The Vikings, Beyer and Los Banos are locked in a three-way tie in the WAC entering the final week. Los Banos (5-4, 5-1) closes against city rival Pacheco.

“I’m been proud of my boys from February to this date,” Beyer first-year coach Greg Bockman said. “We’re in a good spot.”

The showdown takes place at Dan Gonsalves Stadium on the Johansen campus, though the Vikings are the designated visiting team. Beyer will celebrate Senior Night with a chance to claim a league title for the first time since 2015.

But consider Johansen: It hasn’t won a title, nor has it qualified for the playoffs, since 2008.

QB CLUB NOTES – Five Downey High stars were special guests of the QB club and drew the season’s largest turnout to Coaches Corner. The Knights (6-3, 3-1), one game behind Central California Athletic League leader Turlock, have rolled to three straight impressive wins since their loss to the Bulldogs.  Downey is trying to nail down the No. 8 seed, the last home berth, in the section Division II playoffs, and will be heavily favored Friday night against Modesto. “We came in with a lot of expectations. We fulfilled most of them,” senior receiver Lawrence Harris said. “We made goals after the Turlock game not to make those same mistakes again.” … Dylan Miller, the first-year coach of Modesto (1-8, 0-4), thinks the Panthers have made progress in ways the record does not show. “I understand the process. We’re working our way back,” he said. … Gregori (5-4, 2-2) and Enochs (5-4, 2-2) meet at the Jaguars’ Don Lanphear Stadium in another game loaded with playoff ramifications. Enochs coach James Stacy liked how his offense ignited during the Eagles’ 56-0 win over Modesto. …

A Central Catholic victory at home over Oakdale means an outright Valley Oak League title for the Raiders (5-4, 5-0). A loss could result in a three-way tie with Oakdale and Manteca, which is favored against East Union. … Big Valley Christian (5-4, 3-0), the leader in the Central California Athletic Alliance, can seal the Lions’ first back-to-back outright titles with a win at home against Delta Charter. BVC annexed a section D-VII berth with its 49-8 victory over Brookside Christian. Defensive linemen Spencer Cox (six tackles for losses) and Gavin Boone (two sacks, three tackles for losses) paced the Lions. ...

Grace Davis coach Tim Garcia credited Johansen for the hard-fought win in a game that soared to life after a scoreless first half. “They won the turnover battle and the field-position battle. We had 11 penalties,” Garcia said. “Congratulations to Scott. It’s been a long road (for Johansen).”

Modesto Junior College (6-1, 2-0) gears for probably the season’s most important game, a showdown at home against Fresno (5-2, 2-0) Saturday night for supremacy in the Valley Conference. The Pirates’ 66-12 cakewalk at West Hills was triggered by a 45-yard scoop-and-score by D’Angelo Bellamy. “After that, everything went our way,” MJC coach Rusty Stivers said.