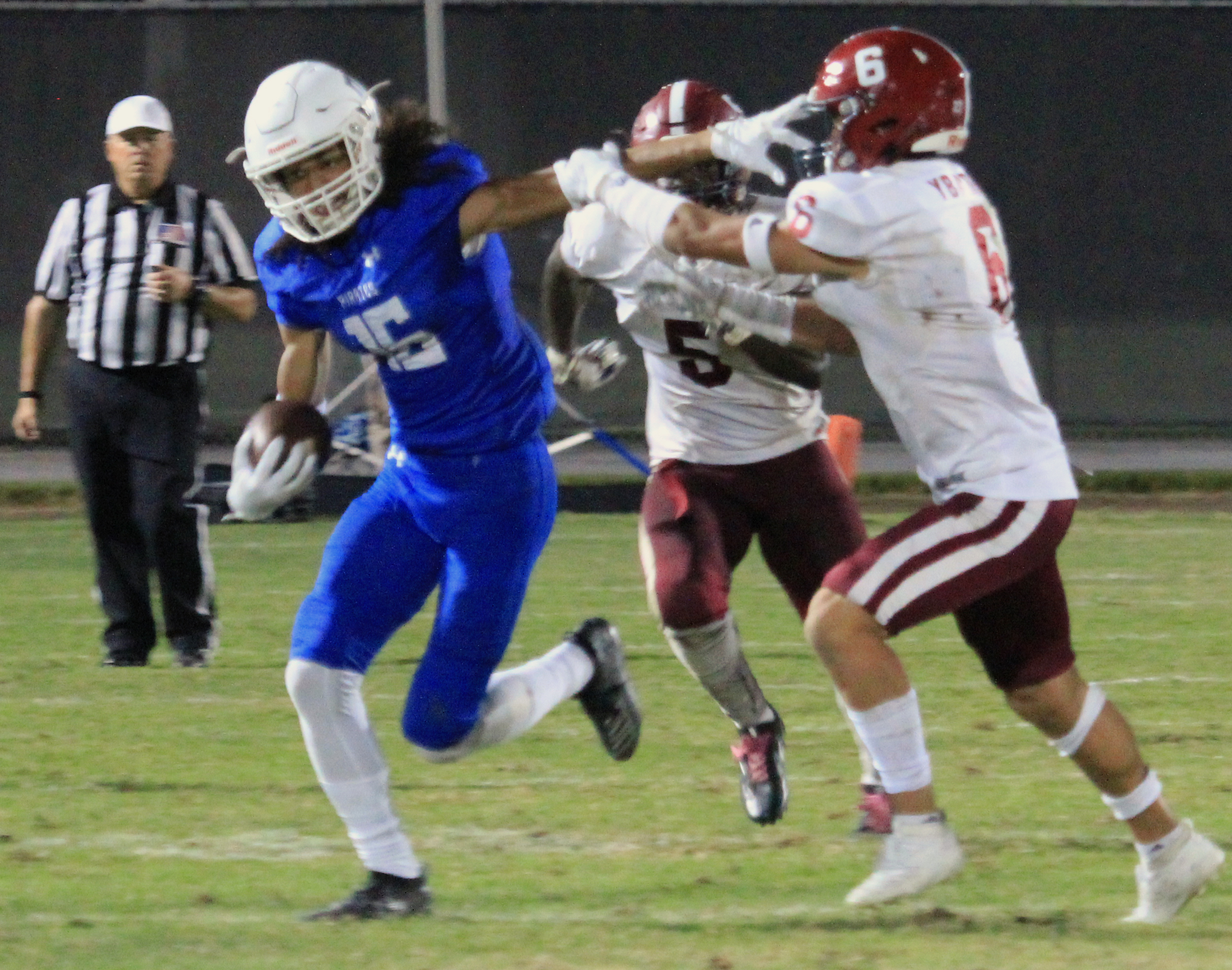 Modesto QB Club: Pirates rise to the state's top tier; where are they ranked?

MODESTO – Year by year and game by game, the Modesto Junior College Pirates continue their ascent.

The evidence suggests they’re no longer just competitive against the best of Northern California. The Pirates now can beat the best. More than once.

San Francisco, the 10-time national champion and eight-time NorCal champ, is a bona fide national power. Beating them twice in a row – ending a 62-year drought against the Rams – is no small feat.

Modesto opened the season by knocking off defending state and national champion Laney. In 2016, the Pirates ran the table to win the Valley Conference title. And they ended the last two seasons with rousing bowl-game victories, the latter over CCSF 28-20. They’ve also stopped San Mateo in two of their last three meetings.

The message: Welcome to the big boys’ table.

“I do think it’s to the point that there’s an expectation we can play with anybody,” MJC coach Rusty Stivers said Monday after the weekly meeting of the Modesto Quarterback Club. “In the past, maybe we thought, ‘Let’s hope we can get out of this game healthy and move on.’”

Community college observers have noticed. The Pirates were bumped to 10th, up six spots, in JCGridion’s “Dirty 30” national rankings. They also moved up three places, to a tie for fourth with Fresno, in the JC Athletic Bureau's weekly state coaches poll.

The rankings mean next to nothing after three games, of course, but they do acknowledge Modesto’s rise in stature.

“It’s like a pat on the back,” Stivers said.

Success under Sam Young, Stivers’ predecessor, resulted in Modesto’s return to Division 1 – Northern California’s elite – in 2010.  The Valley, the NorCal and the Bay 6 conferences comprise D-1.

Non-league schedules are predicated on how teams finish in league standings. That’s why MJC has matched up against the best – Laney, Sierra, San Francisco, American River and San Mateo – last year and this season.  The teams will be reshuffled after the current season.

“The way our preseason is set up, we have five bowl (caliber)  games in the first five games,” Stivers said. “We can’t take a breath.”

The Pirates continue their gauntlet at American River on Saturday night and next week at San Mateo. After a week off, MJC begins conference play at home Oct. 19 against Sequoias.

One issue which requires immediate attention is penalties. Modesto was assessed a staggering 149 yards on 19 penalties, 15 of them on offense, against CCSF.  Thus encouraged, San Francisco rallied from an 11-point deficit in the fourth quarter before Modesto’s clutch drive in the final minutes.

“Most of the penalties on the offense were pre-snap. It was an anomaly. We’ve never had that kind of a problem,” Stivers said. “We have to do some serious work on cadence and applying more pressure in practice and holding them accountable.”

QB CLUB NOTES – Central Catholic (1-4, 1-0) received a fortunate bounce that keyed its 27-26 win at Manteca to open the Valley Oak League season. A Manteca punt caromed off the helmet of a CC player backward toward the Manteca end zone – straight to Nic Sani who carried it to the Buffaloes’ 34. Minutes later, Dalton Durossette’s swing pass to Minaya Olivo resulted in the game-winning 13-yard touchdown pass with 1:11 left.  Durossette also blocked a PAT during the third quarter. CC is 6-0 vs. Manteca since it joined the VOL in 2014. The Raiders welcome unbeaten Sierra and running back Kimoni Stanley (673 yards, 13 TDs)  to Patton Field on Friday night. …

Beyer linebacker Sean Perkins preserved the Patriots’ 14-7 win over Los Banos with his clutch tackle near the goal line as time expired. The Tigers’ Landon Ramos caught a pass and nearly beat Beyer’s prevent defense, but Perkins dashed from long distance to save the win. Beyer (2-2, 1-1) also can thank sophomores Darius Murphy (touchdown catch) and David Jones (interception). The Patriots will celebrate homecoming against Ceres at Johansen. … Johansen coach Scott Sacuskie called it “a no-brainer" to go for the 2-point conversion, and the win, with 37 seconds to go against Pacheco. The Vikings (3-1, 1-0) went to their workhorse Jesse Arriola (21 carries, 150 yards) for the play which made them a 21-20 victor. Johansen travels to Mountain House. …

A big reason for Davis’ good start (4-0, 1-0) is its nine take-aways and two touchdowns on defense. Senior Michael Sherrod accounted for a pick-6 during the Spartans’ 48-27 homecoming win over Mountain House. He also suffered a broken index finger – he was slowed over the summer by a fractured thumb – during the game.  Davis is the host Friday night at MJC against Los Banos. … Injuries to Javyn Drobnick and Blade House have hurt Big Valley Christian (1-3). The Lions rallied from a 14-0 deficit to draw even but eventually lost 20-14 at Woodland Christian. The BVC ranks will be bolstered by four transfers who become eligible for Friday's road trip to Delta of Clarksburg. …

Downey (3-2) regroups with a bye this week after a 55-6 loss at McClymonds of Oakland.  The Knights will prepare for an important Central California Athletic League opener next week at home against Turlock. “I think our kids were looking ahead a little bit,” coach Jeremy Plaa said. … Sebastian Saucedo blocked a punt, and Oscar Tamayo eventually carried into the end zone, one of the highlights of Modesto’s 48-0 homecoming win over Franklin. Running back James "J.J." Hayes rushed for two touchdowns to highlight Dylan Miller's first win as Panthers coach.  Modesto travels to Stagg on Friday night. …Enochs (3-1), off last week, prepares for Edison of Stockton’s Raleek Brown, one of the nation’s most heavily recruited running backs, Friday night at Gregori.