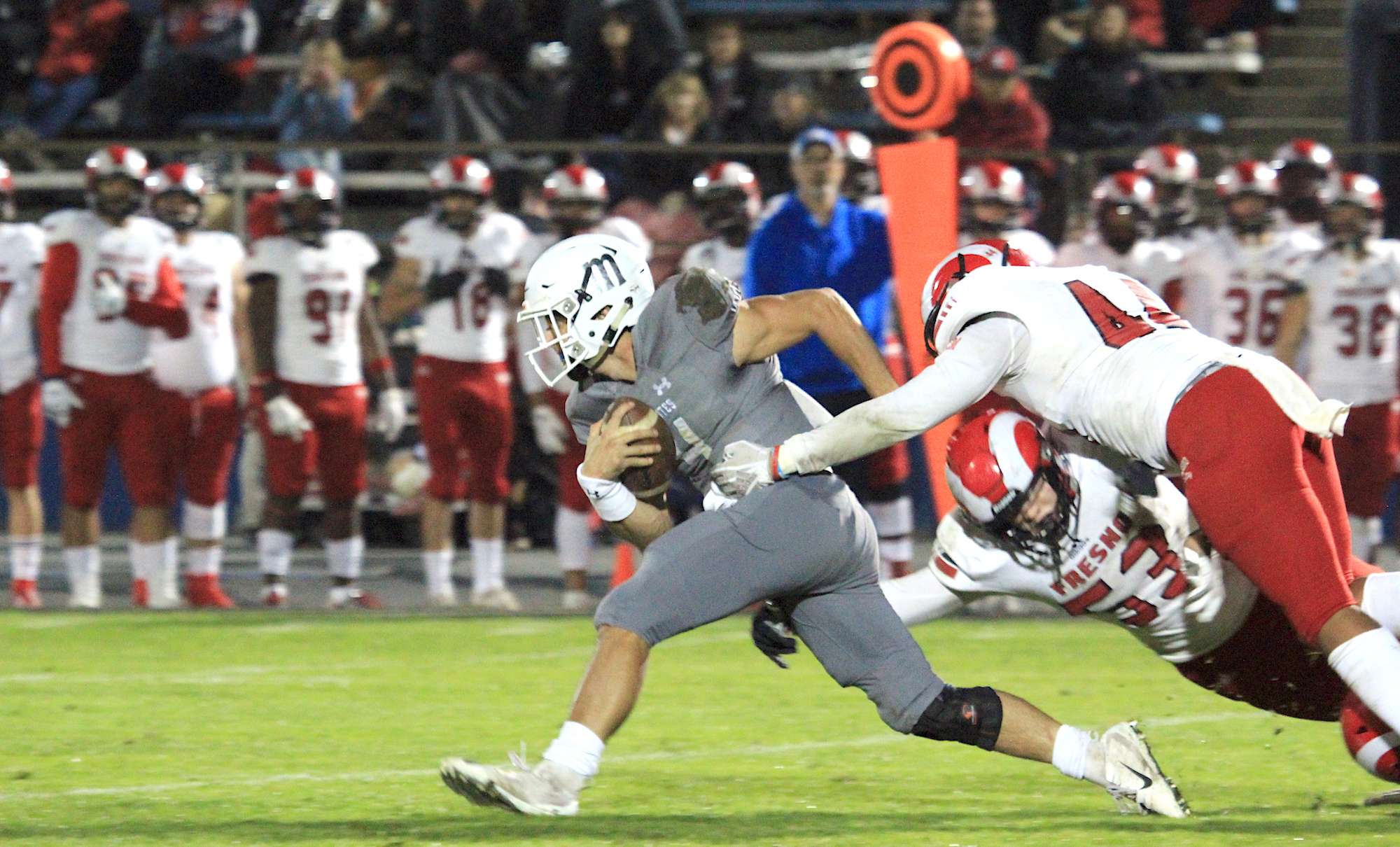 MODESTO – The Modesto Junior College Pirates victimize most opponents with their fast-paced offense. They rush to the line of scrimmage, rack up the points in bunches and roll down the field.

For three quarters Saturday night, there was no such rolling.  And that’s why the Pirates were bounced from first place in the Valley Conference race.

The home fans at MJC Stadium were not accustomed to the Pirates’ 20-3 deficit after three quarters. Fresno’s efficient defense, which held Modesto 12 points below its season average, seemed a step ahead of the MJC attack most of the game.

“They kept us in check,” MJC coach Rusty Stivers assessed. “We couldn’t sustain any drives and had some self-inflicted issues offensively, and keeping the defense on the field a little longer than usual didn’t help.”

Quarterback Danny Velasquez absorbed a vicious blow to the helmet early in the game and struggled at times. Undaunted, he somehow pulled the Pirates back onto their feet with two long-distance throws during the fourth quarter.

The first was a 72-yard strike to a streaking Jordan Porter for MJC’s first touchdown. A few minutes later — after a clutch catch for a 50-yard gain by Brandon Gray — Payton Bass pushed to the left 3 yards for another score. Suddenly, the margin was sliced to 20-17 with 11:15 to go.

The offense again stalled, however, and backup quarterback Brett Neves' desperation pass on 4th-and-19 was intercepted by Fresno’s Xavier Alexander. On the next snap, the Rams’ Rico Rosario (23 carries, 139 yards) stepped 11 yards for the touchdown that upped Fresno’s lead 26-17.

To Modesto’s credit, it wasn’t finished. Neves relieved Velasquez and completed four passes, the last one a 12-yarder to Lucas Curtis for a TD with 50 seconds to go. But Fresno easily recovered the onside kick.

Velasquez’s two interceptions, combined with a no-turnover night by the Rams, also revealed the victor. Fresno, aware of Velasquez’s threat as a runner and a passer, deployed a spy on the MJC quarterback the entire night.

“They (Fresno) didn’t beat themselves. They run their base and keep everything in front of them,” Velasquez said. “They have good coaching with good players.”

One of those coaches on Tony Caviglia’s staff is defensive backs coach Drew Brown, the former MJC defensive coordinator under both Sam Young and Stivers.  Clearly, the Rams were well-prepared.

“They did a great job schematically, but at the same time for us it felt like we had some missed assignments,” Stivers said. “Usually, you like to say when you don’t do well on offense it’s because of mistakes, not necessarily the defense. It was a little bit of both definitely.”

Fresno quarterback Jonah Johnson, who led the Rams to the 2018 league title and a berth in the NorCal finals, also made a major contribution. His 92-yard thunderbolt over the middle to Milton Clements ended a defensive stalemate and lifted Fresno to a 13-3 lead early in the third quarter.

The game was stopped for about 10 minutes during the second half after Fresno defensive back Kiundre McDowell was knocked unconscious. He reportedly regained consciousness while he was still on the field and eventually was taken to an ambulance via stretcher.

Such was the game’s hard-hitting pace.  Modesto paid dearly for two first-half drives inside the Fresno 10 resulting in only three points.  Fresno frustration often stalks the Pirates, who are 2-8 against the Rams since 2010.

“We still have a chance at an at-large (playoff) berth. The whole goal is to get to the state playoffs,” Stivers said. “That’s what we’re shooting for.”

Getting there, however, became more difficult Saturday night.