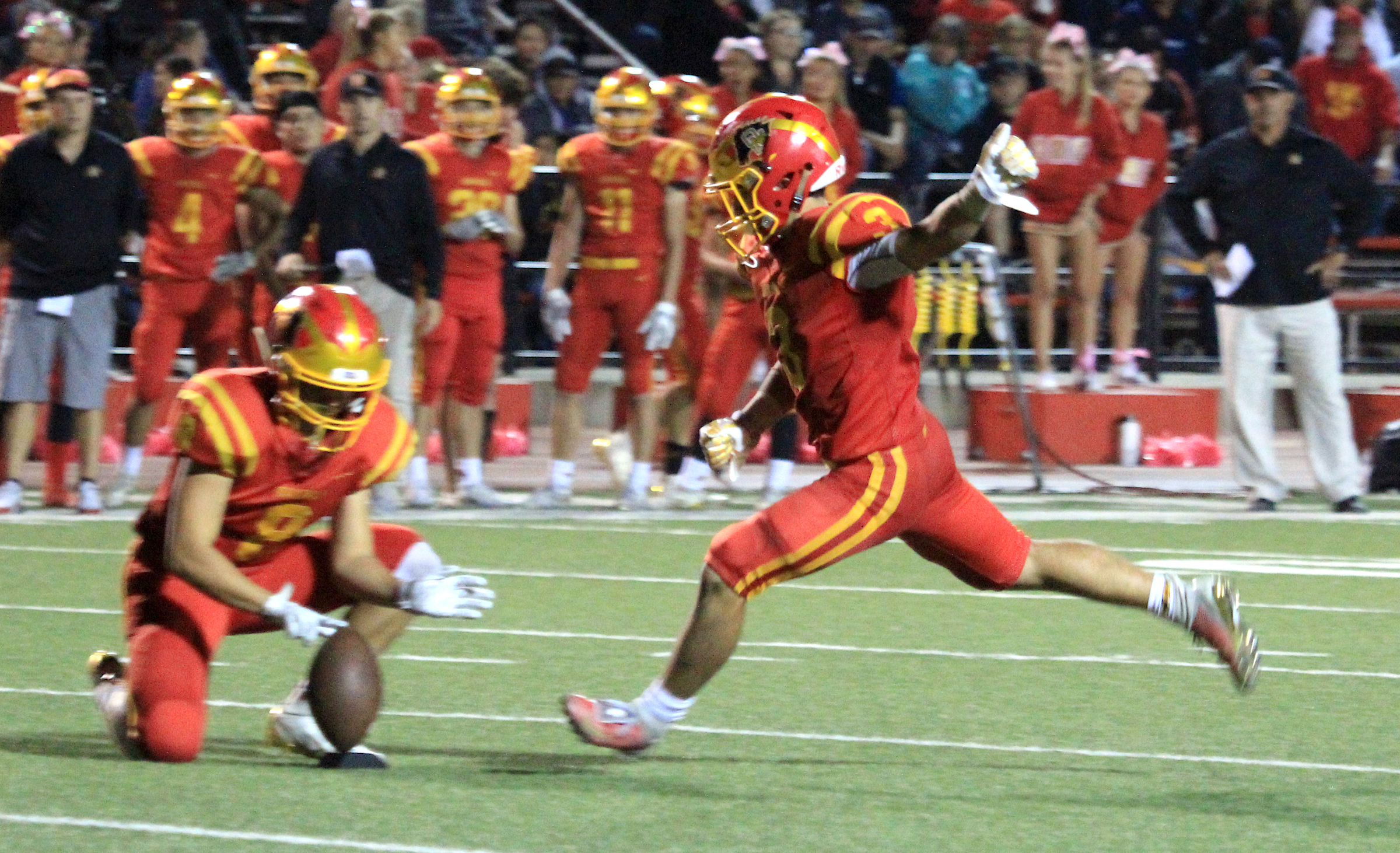 Oakdale senior Dom McDonald converted all five extra-point kicks and a field goal, and setup the go-ahead touchdown with a gutsy 27-yard punt return as the Mustangs rolled Sierra 38-14 on Oct. 11, 2019. (Samantha Schmidt)

OAKDALE – Oakdale High senior Dom McDonald weighs only 160 pounds and greets visitors with a sly grin. The word is out: Don't mess with him on game night.

“You look at him and you think, ‘No way,’” coach Trent Merzon said. “But you watch him…he does it all for us.”

McDonald, a weight room fanatic, put aside his 265-pound power-clean numbers Friday night and showed off everything else, including a potent right foot, during the Mustangs’ important 38-14 Valley Oak League win over Sierra.

All McDonald did was boot a field goal and all five conversions, and tilted the field in Oakdale’s favor with effective rugby-punting. The tenacious corner also turned in a gutsy 27-yard punt return that led to the Mustangs’ go-ahead touchdown late in the half.

“Weight room, 100 percent, and not letting the talk faze me,” McDonald said. “I’ve heard it many times, ‘Too small to do anything.’”

A homecoming and senior night crowd at the Corral begged to differ.

Zeke Saffar ripped for 171 yards and three touchdowns, but McDonald and his mates on defense set the beat by forcing four turnovers.

Oakdale (4-3, 2-1), sobered by last week’s loss to Manteca, stayed in the VOL title chase with two road games left.  It hasn’t been the smoothest of rides for the Mustangs – witness the three home losses – but they’re positioned for a potential VOL title showdown in three weeks at Central Catholic.

“We had two goals tonight. I wanted everyone in the stadium to know that our kids love football, and I wanted our team to be the toughest team on the field,” Merzon said.

Oakdale tore a page from the New England Patriots’ playbook by sandwiching touchdowns on each side of halftime to break a 7-7 tie.  McDonald’s punt return to the Sierra 30 yard line was followed, six plays later, by sophomore Jackson Holt’s perfect 8-yard lob to a leaping Payton Bradford in the corner of the end zone with 23 seconds left in the half.

The first play from scrimmage after the break fortified Oakdale’s momentum. Defensive lineman  Dom Marenco-Batteate blew up an attempted Sierra handoff, resulting in a turnover. Saffar cashed it in three plays later by taking a straight pitch from Holt and bolting 21 yards to his left to the end zone.

Sierra (5-2, 1-2), an improved team under third-year coach Chris Johnson, earned Oakdale’s attention by sacking Holt three times during the first half. Better still, junior Kimoni Stanley – one of the area’s premier running backs – stepped 83 yards between the hashmarks for a tying touchdown late in the first quarter.

Stanley finished with 160 yards on 16 carries and both TDs for the Timberwolves, but Oakdale’s reliable Wing T offense gradually gained traction.  Sierra needed to be nearly perfect. It wasn’t.

Take away Stanley’s long-distance sprint and a 67-yarder in the second half by quarterback Shane Johnson, and it was the Oakdale defense in charge. The Mustangs outgained Sierra 309-249 and parlayed all four second-half possessions into scores.

“They (Oakdale) have set the standard for public-school football in our part of Northern California for years. They make us better,” Chris Johnson said. “You can’t give Oakdale a short field. They had it all night.”

Saffar, fleet and dangerous, punctuated the Oakdale victory with fourth-quarter touchdown gallops of 73  and 18 yards.

But long before, McDonald and the swing of his right foot proved decisive.