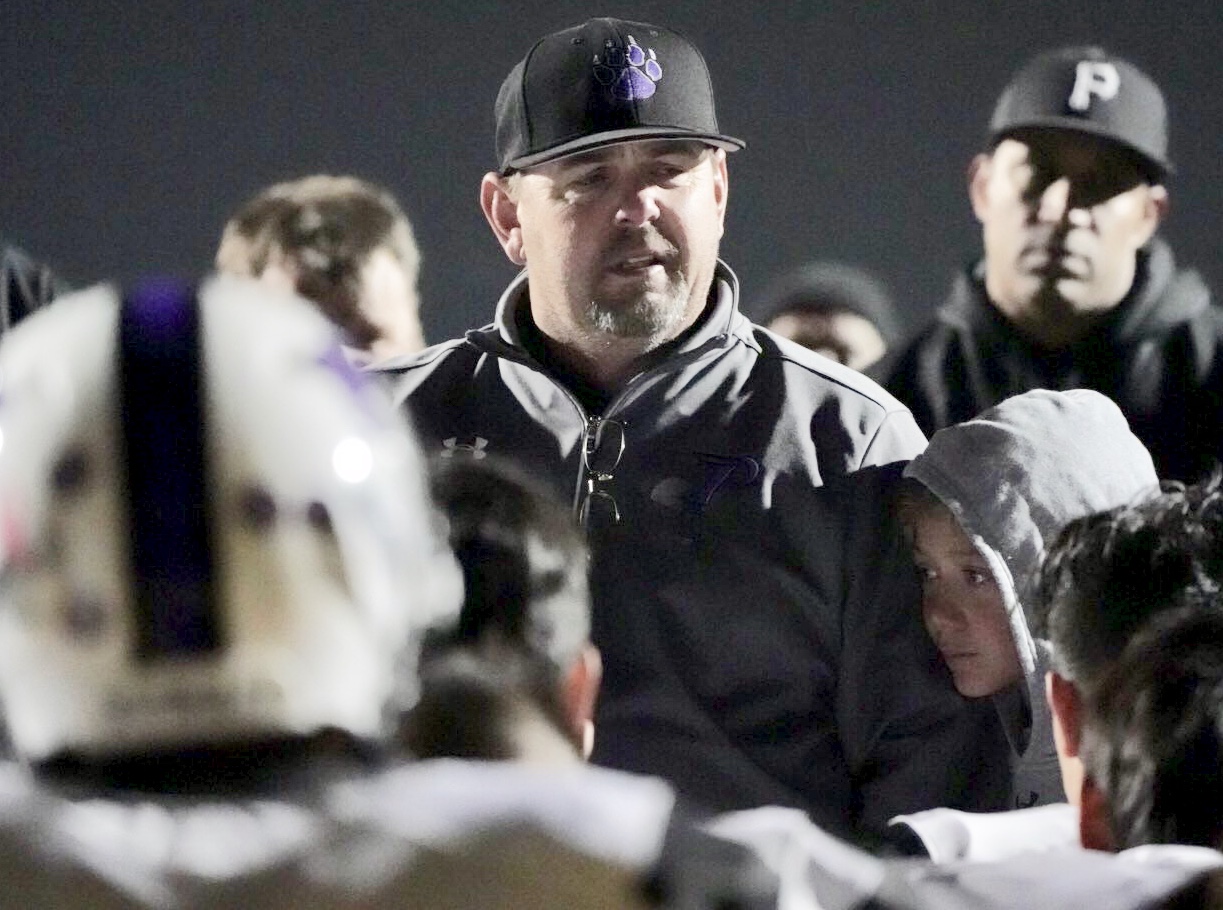 David Snapp stepped down as head football coach at Pacheco High after eight seasons. The only coach in school history, Snapp was 46-40 with three winning seasons. (Charlie Pikas)

'My family needs me.' After leading school to first title, coach steps away.

LOS BANOS — David Snapp could feel the pull of family and home following a third consecutive 5-5 campaign in 2017. However, the architect of the Pacheco Panther football program, its only coach, chose to stay just a little longer.

There was one box left to check: Hang a banner.

On Oct. 19, Pacheco finally reached that summit, celebrating its first-ever league championship with a 56-23 victory over Beyer. Three weeks later, the Panthers, led by Marcus Ordunez and Julian Moran, engaged in a high-stakes shootout with top-seeded Rio Linda in the second round of the Sac-Joaquin Section Division IV playoffs.

That would be Snapp’s final game at the controls. Rio Linda ushered in a new era with a 77-63 victory, but the wild season-ending loss did little to diminish a historic ride for the West Side’s youngest program. All three levels earned a share of the Western Athletic Conference title, a feat Snapp touts.

“The championship means a lot for the program,” he said on Thursday evening. “I think more so the success all three levels had this year bodes well.”

In eight seasons, Snapp was 46-40 with three winning seasons, including a school record nine victories this fall. Pacheco had a chance to clinch the Western Athletic Conference title outright but suffered a Week 10 loss to rival Los Banos in the Crosstown Clash, 28-21. Snapp was 2-6 against the Tigers.

“I hope we’re remembered as a self-made program that fought through a lot of adversity to gain the successes we’ve had,” Snapp said. “That we’ve instilled a tough mindset in our guys and gave young men the hope they could get out of Los Banos and continue playing at the next level.”

In eight years, 17 former players have played college football at some level, while more than 20 have served in the military.

“From Day 1, he’s been about developing young men into better people,” Pacheco athletic director Charlie Pikas said. “There’s been ups and downs, but at the end of the day you always knew he was there for his kids and loved them all. Other teams and coaches on campus have seen that and it’s helped create that family culture.

“He’ll be remembered as starting with nothing and building a competitive program year in and year out. The league title was great, but he was so much more than just this one season."

What’s next for Snapp, a Morgan Hill native with deep football roots?

Snapp points to a growing family that has shared their patriarch for far too long. He and his wife Lorraine have five children, including a 22-year-old daughter who may need brain surgery in the spring. Snapp’s other children are Michael, Adariana, Atley and John David. This next season in his life belongs to them, he says.

“Honestly, I decided in January that this was going to be it,” Snapp said. “I felt it was just time for a new voice. … My family needs me and I’m tired.

“If it wasn’t for them, I wouldn’t have ever had this opportunity,” he added. “They sacrificed a lot for me and now it’s my time for them.”

Snapp is the second area coach to step down this postseason, joining Gregori’s Jason McCoy. Like Snapp, McCoy said it was time be a family man, not a football coach.

Interest in both openings should be high.

Pacheco and Gregori are coming off landmark league championships — the Jaguars won their first-ever title in 2017 in the now-defunct Modesto Metro Conference — and stocked with young talent.

“With all three levels having part of a WAC title this year, I would hope it’s an appealing job,” Pikas said. “But there are a lot of things behind the scenes that go into being a varsity coach and we are going to do our best to make sure the next coach can keep what Dave has started and build on it.”