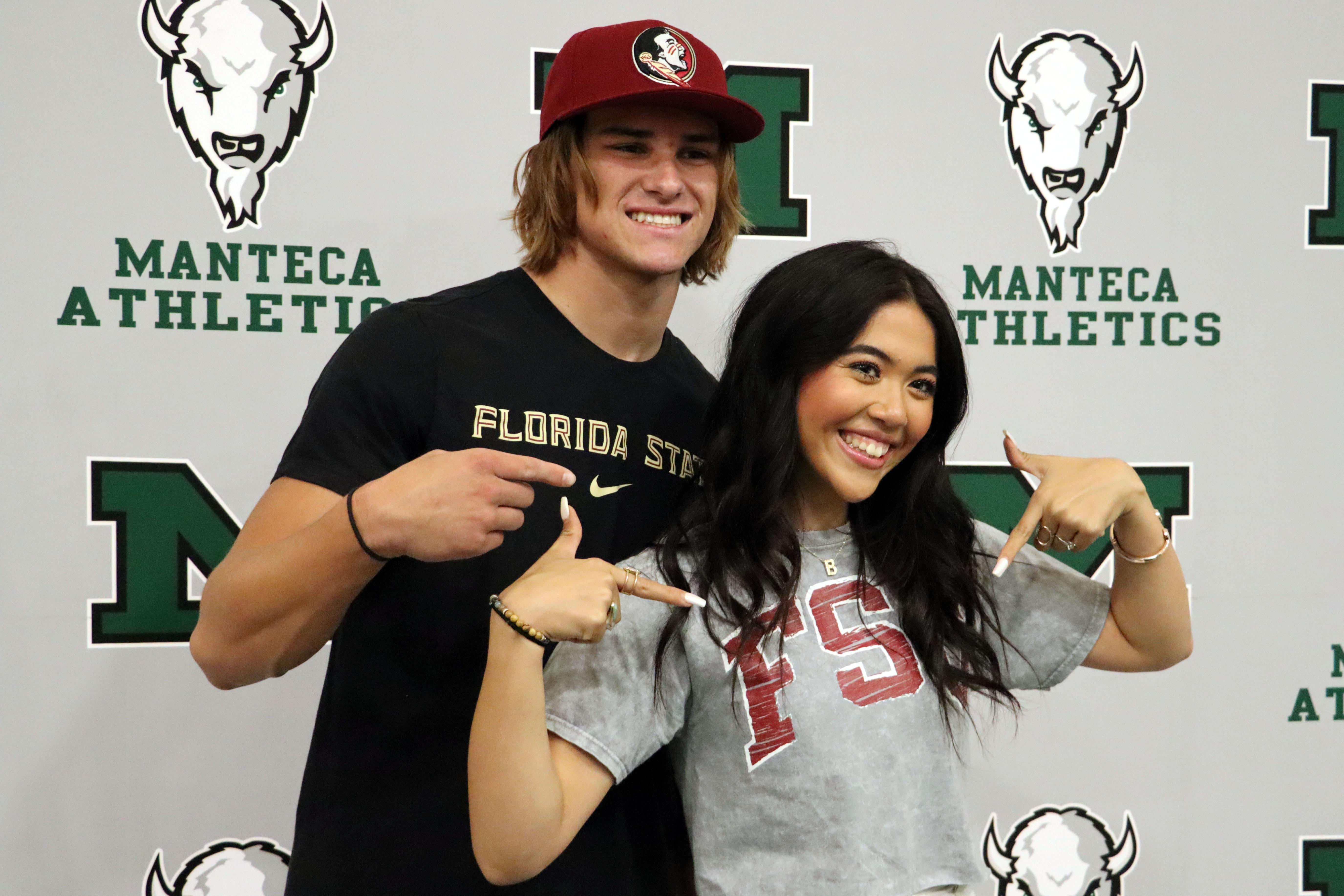 MANTECA – Passionate college football fans have memorized the scene: The high school recruit seated at a table with caps of his desired schools sitting in front of him.

Futures of young men and the direction of football programs are defined by such moments as the one that played out Tuesday night in Manteca High’s shiny new gymnasium.

Blake Nichelson, flanked by his parents Don and Nicole and brother Wyatt, appeared nervous but calm as the moment arrived. Then, with no hesitation, he reached for the garnet-colored cap of Florida State and pulled it over his long locks.

Nichelson, the most intensely recruited football player in the Buffaloes’  100-year history, will be a future Seminole.

“I didn’t make my choice 100 percent until yesterday,” the Buffaloes’ fleet two-way star said. “I initially had the thought of Florida State but it took a really long time to figure this out.”

Nichelson committed to the Seminoles in what appeared to be a tough decision over Oregon. In fact, the family made its fifth trip to Eugene last weekend to watch the Ducks.

“It (that trip) made it closer,” Don Nichelson admitted. “He was stressed, but he handled it a lot better than I did.”

The sky-blue cap of UCLA, one of the nation’s signature brands, also decorated the table as one of Nichelson’s three final choices. The Bruins were a longshot, however, and Nichelson explained how he was leaning all along toward Tallahassee and Tomahawk Nation.

Shannon’s presence, as poker experts say, was a tell. So did the personal contact, more than other head coaches courting him, of Florida State’s Mike Norvell. But more than anything else, Nichelson liked the feel of Tallahassee and the grassroots appeal of the football program during his two trips.

“Whenever I’m there, it just feels like home. Great place to be. The fans are crazy there. I really liked that,” he said. “It had a family feel to it. It felt like a place where I could see myself thriving…I really felt  I  could develop into a good football player there.”

What especially caught his attention was being recognized by Florida State fans in restaurants and on the street.  He immediately latched onto the passion of college football in the South, and Tallahassee is one of its famous outposts each autumn Saturday.

Nichelson expressed relief that the two-year process was completed. He was offered scholarships by 21 FBS schools, including many on the West Coast. The first was Fresno State, and Oregon State made a strong early push.

He received text messages and constant attention, however, from Florida State fans and even Seminole players. The charm of Doak Walker Stadium, the home of the original Tomahawk Chop, no doubt made an impression.

“Completely loyal fan base,” Nichelson said. “That was a positive.”

Manteca High, taking full advantage of all the multi-media bells and whistles of its new arena, met the moment. A two-minute clock on the video screen ticked down to zero, and 247 Sports aired the announcement live.

The anticipation was tinted with both joy and curiosity. Nichelson  was a four-star recruit and was ranked the 11th-best football player in California. For a few precious minutes, the college football world centered on Manteca.

Those close to Nichelson knew which way he leaned. In fact, he told Norvell and his staff he was heading east not long after the Seminoles’ big win over LSU on Sept. 4.

That said, most observers still thought Oregon was in play. He loved the Ducks since he was a boy,  and he called the Oregon staff earlier Tuesday to express a courteous thank-you.

“It was really close,” he said. “It was kind of an emotional moment when I decided I wasn’t going there.”

When Nichelson made his choice, his girlfriend Mia Duag – the Central Catholic homecoming queen, student body president and cheer captain (they met when they were freshmen there) – quickly doffed a sweatshirt to show her FSU shirt.

A boombox later blared the Tomahawk Chop and the Florida State fight song, and Manteca teammates and friends took turns congratulating the man of the hour.

All three final schools envisioned Nichelson as an inside linebacker, and he knows he’ll be asked to beef up his 6-foot-3 210-pound frame.  That shouldn’t be hard. His physical maturation quickened during the pandemic lockdown, as the family turned the garage into a weightroom Nichelson sometimes visited twice a day.

As for the Buffaloes, they believe Nichelson can do anything on the field.  They’ve seen him do it, in fact – 57 touchdowns in 17 games to be exact – and he's poised to chase more prep glory with the recruiting burden lifted.

“A huge day for Blake and a huge day for the Buffs,” Manteca coach Mark Varnum said. “I’m excited to see what he does next, and I’m glad I’ve got him for a few more months myself.”

So ended a day of local history and, for Nichelson, an exciting new chapter soon to take shape.