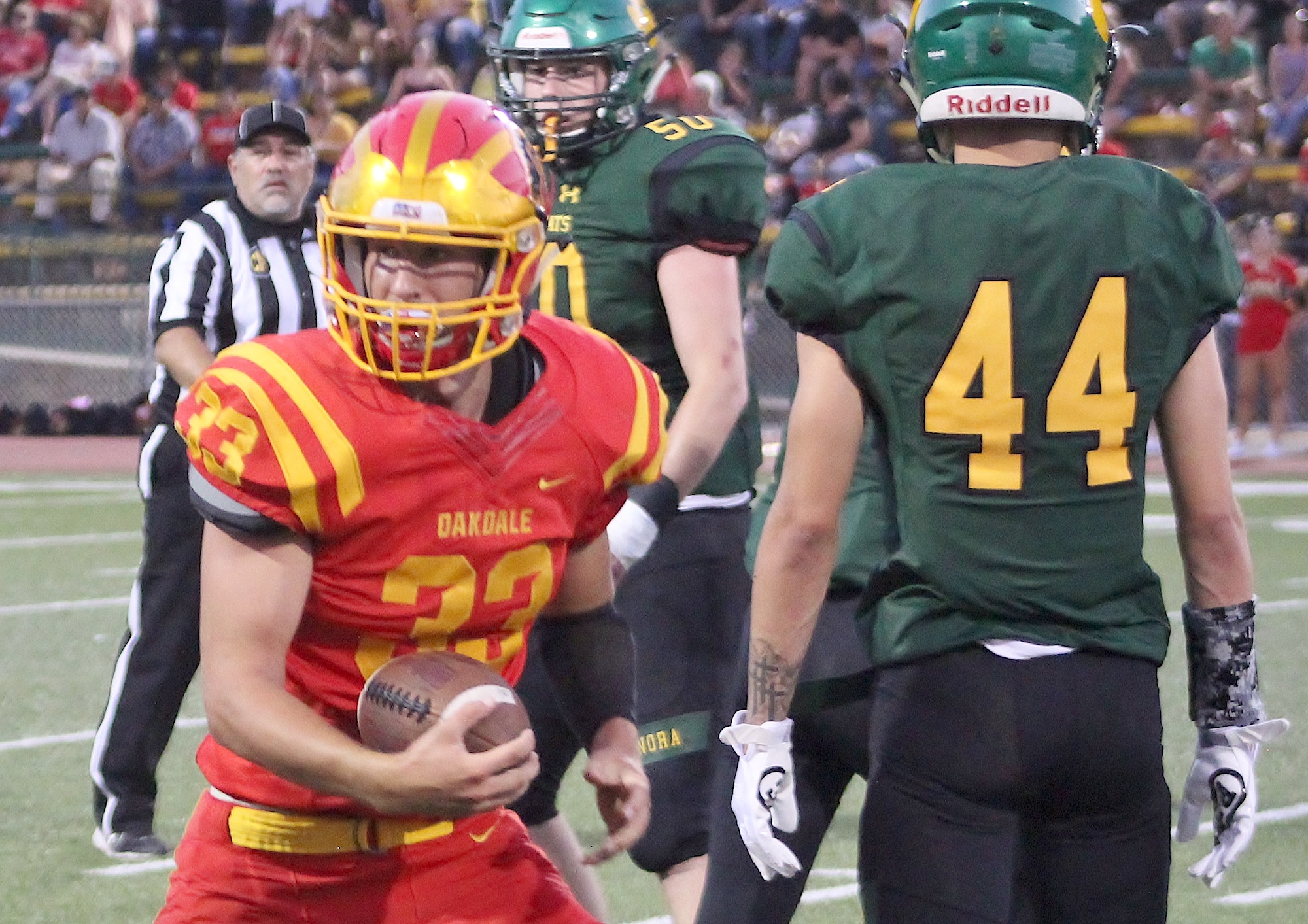 Oakdale's Peyton Bradford punctuated a 34-point second quarter with a scoop-and-score fumble return on the final play of the first half, sending the Mustangs to a 41-7 victory at Sonora on Aug. 23, 2019. (Dennis Cruz/Oakdale Leader)

Oakdale High coach Trent Merzon, a youngster back then, remembered the night Roseville and quarterback Robbie Bosco paid a visit to the Corral.

Why is this relevant, you ask? Because one can make the argument that Liberty of Brentwood senior Jay Butterfield, whose Lions are on their way to Oakdale Friday night, might be the most heralded opposing quarterback in the Corral since Bosco.

“We’ve had great quarterbacks come in here,” said Merzon, perhaps in reference to Folsom grad Kaiden Bennett, who transferred this week from Boise State to Nevada. “Butterfield is as good as everyone says he is. He’s special and unique.”

Butterfield, 6-foot-6 and 210 pounds and the son of former Stanford quarterback Mark Butterfield (now an assistant coach on Ryan Partridge’s staff), checks every box. He led Liberty to the 2018 CIF I-A title, and his record as a starter is 18-1.

Last week, the Oregon-commit broke in new receivers by passing for 311 yards and two touchdowns during Liberty’s season-opening 49-24 victory over Vacaville.  The only team to own a recent victory over Liberty is De La Salle, and the Lions currently are ranked 11th in California and 40th in the nation.

While much of the attention in the area will be focused on De La Salle’s trip to Central Catholic, Liberty-Oakdale is no garden variety undercard.

“If you’re not struggling, you’re not growing,” Merzon said.“I’m OK with us taking a chance of losing to a football team to get better … and (Liberty) is a monster. They have talent all over the field.”

True enough, but Oakdale always packs a punch, especially at home where the Mustangs are 92-8 since 2004.

The game is a one-off. Liberty agreed to the bus ride, but the Lions also will keep their advance gate revenue according to Merzon.

On the field, Oakdale promises a typically fierce fight. The Mustangs opened with an explosive if uneven performance to beat longtime rival Sonora 41-7. The game was scoreless until Oakdale’s 34-point second quarter, capped by Peyton Bradford’s scoop-and-score on the final play of the half.

Running backs Zeke Saffar and Leo Ayala accounted for 229 yards and three touchdowns, and sophomore quarterback Jackson Holt was given high marks by Merzon in his first varsity start.

“It was a weird game. It’s not my job to be happy,” he said.“They (Sonora) took a lot of chances. Defensively, we played well.”

Merzon joked that the Liberty game “seemed like a heck of an idea in March.” All kidding aside, Oakdale – a state champion in 2016 – also brings top-of-the-line credentials into the matchup.

“We’re thrilled that the program has elevated ourselves to have this opportunity,” Merzon said.

Postscript on 1979: Roseville and Bosco limped home from Oakdale with a 28-14 playoff loss.