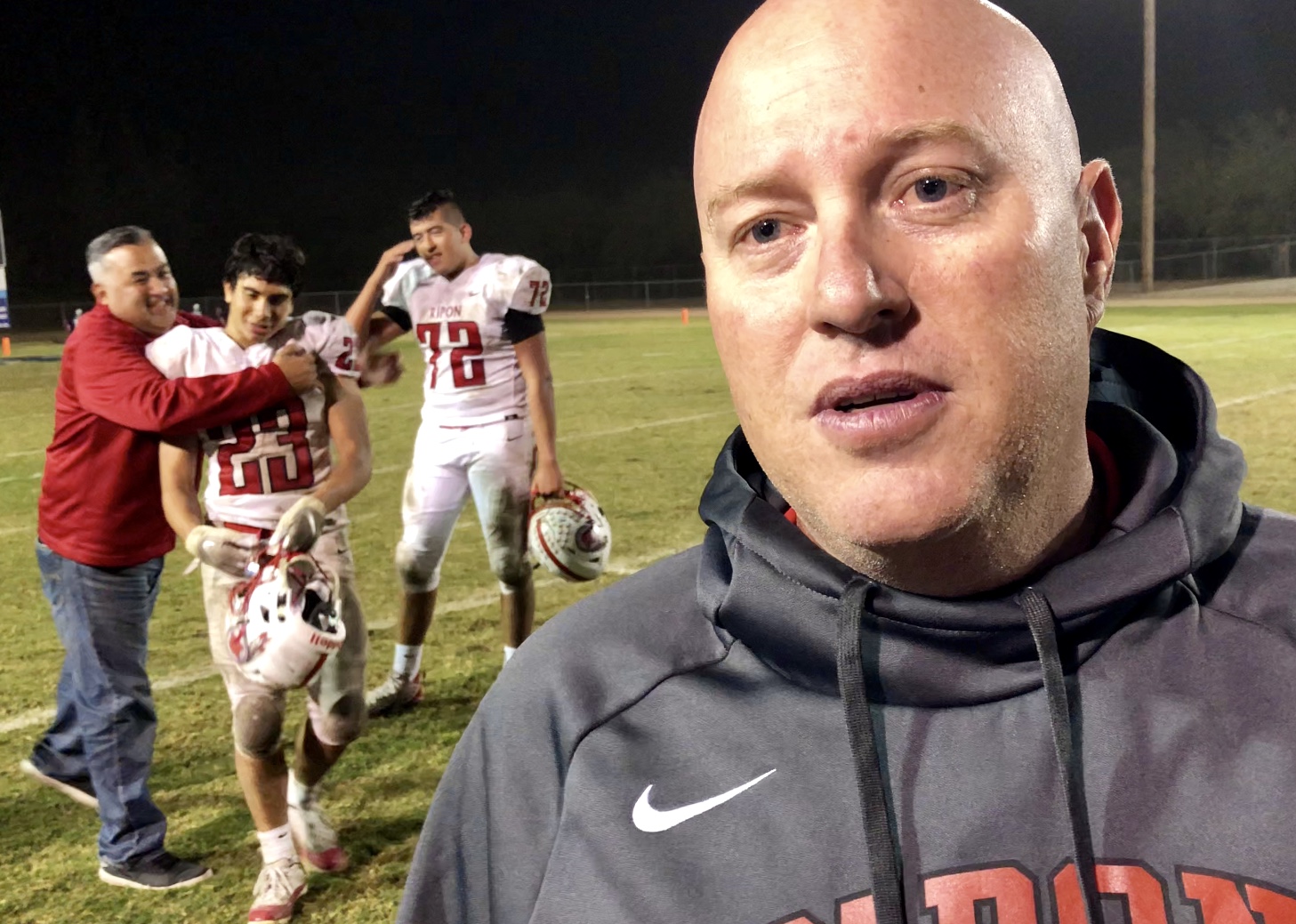 Ripon coach Chris Musseman reflects on a 25-22 victory over Modesto Christian on Oct. 26, 2018. The win gave the Indians a share of the Trans-Valley League title and the league's top playoff seed in the upcoming Sac-Joaquin Section Division V playoffs.

Down to its final game, the Trans-Valley League, the state’s toughest small-school conference, provided one last thriller and produced another unlikely hero.

With an aching right leg, Ripon High junior Nathan Valdez stroked two field goals in the final minutes of the fourth quarter to stun No. 1 Modesto Christian and complete a come-from-behind 25-22 victory.

“Other than one week this year, they’ve handled adversity really well when it’s happened,” Ripon coach Chris Musseman said of his team, which clinched a share of its second straight TVL title and the league’s No. 1 playoff seed by virtue of the head-to-head tiebreaker.

“We knew coming into tonight that (Modesto Christian) is one big, strong, talented football team. While they were fresh, we knew we might struggle. We felt like we were in better shape, and if we could weather the storm, we’d be OK in the end. And that’s what happened.”

The Indians (9-1, 5-1) overcame a 15-point deficit and completed their comeback with a blocked punt with 30 seconds remaining. Rather than ice his own kicker, Musseman sent Valdez onto the field on first down. From 27 yards ... with the weight of a season on his shoulders ... with a groin injury begging for ice and rest ... Valdez split the uprights and shattered the Crusaders’ bid at perfection.

“We knew all year we had a good kicker," Musseman said. "He hasn’t been tested in that kind of situation. That might be why we kicked the second one so quickly instead of running a play. ‘Let’s not let the junior kicker think about it.’ Let’s get the points and let our defense, which has been a rock for us all year, get us through the end of the game.’ ”

Modesto Christian (9-1, 5-1) had won its first nine games, including thrilling nail-biters with Escalon and Hilmar. On Friday, the TVL finally caught up to the Crusaders.

Patrick Garcia scored on a 1-yard plunge with 3:11 left in the third quarter to give Modesto Christian a 22-19 lead, but the Crusaders couldn’t hold the lead. Ripon outscored Modesto Christian 6-0 in the fourth quarter.

Valdez tied the game with 2:17 left, and Brandon Rainer (touchdown run) burst through the line of scrimmage to block a punt on the Crusaders’ ensuing possession. The ball bounced out at the Crusaders’ 10-yard line.

“That blocked punt won the game,” Musseman said of Rainer, who also recovered a fumble on the final to trigger a raucous celebration on the vistor's sideline.

The kick was pretty pivotal, too. Valdez suited up despite a strained groin in his right leg. As each kick ascended through the uprights, the pain was replaced with euphoria.

Ryan Daggett was 11 of 15 for 120 yards. He scored on a 1-yard run and later connected with Nico Ilardi on a 23-yard scoring strike to give Ripon a fleeting 19-15 lead early in the third quarter.

As the TVL’s No. 1 seed, Ripon is in line for a top seed and bye in the Division V playoffs. Musseman, however, isn’t holding his breath. Last season, the Indians were made a No. 7 seed in the D-V tournament, despite winning a share of the league crown, and were forced to travel to Calaveras, a game it won.

“I wish I could figure out this postseason thing," Musseman said. "I’m not going to bet on anything, but I feel like if you win the TVL, or a share of that title, you should be taking a week off next week.”