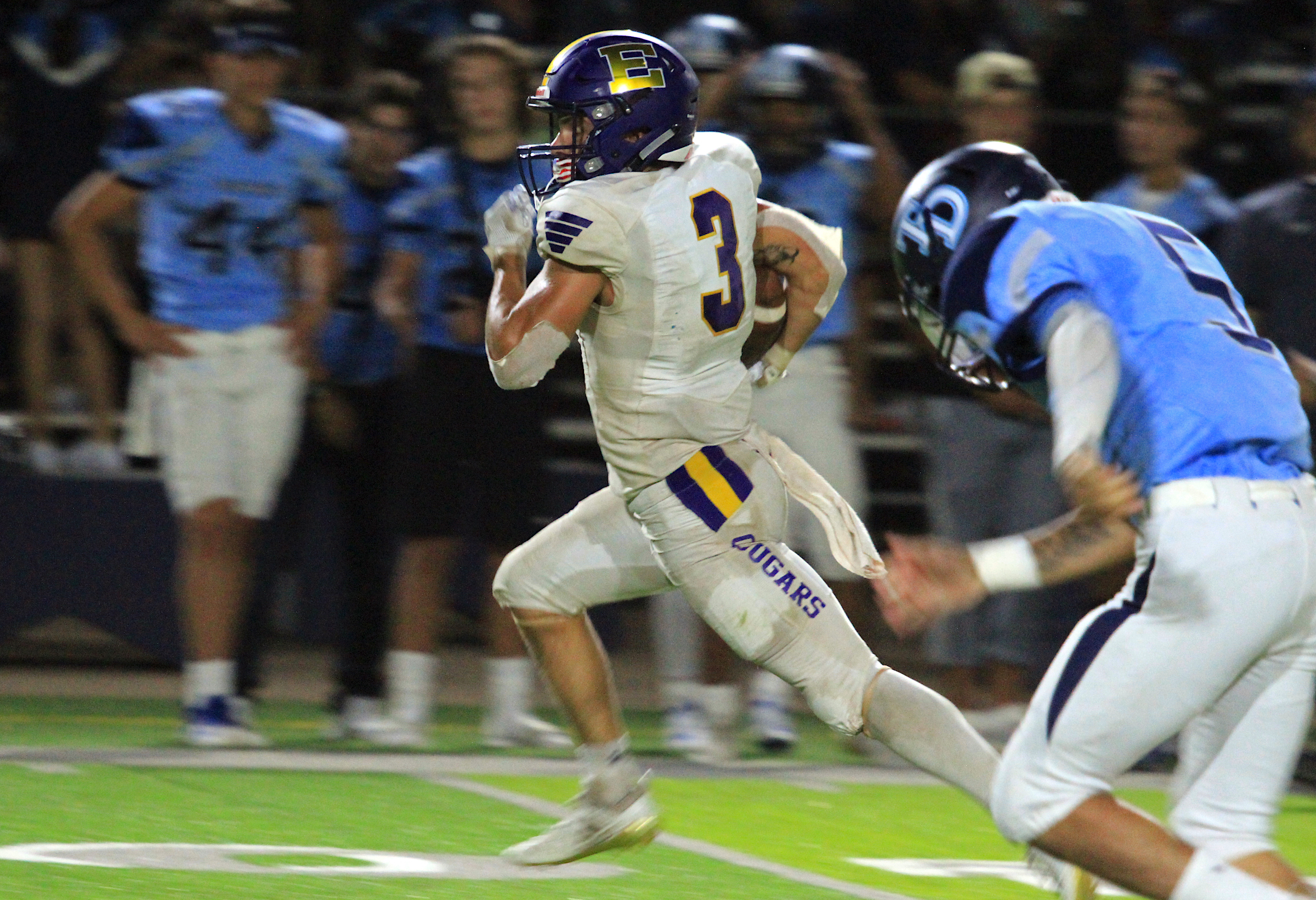 Escalon running back Kaden Christensen runs away from the Downey defense during a decisive 49-20 victory on Friday, Sept. 13, 2019, at Chuck Hughes Stadium. (Samantha Schmidt)

'Once in a lifetime:' How small-school Escalon routed large-school Downey

MODESTO -- He jogged and then skipped, bounding down the middle of the field the way his teen-aged players do after a big play. Finally, Escalon football coach Andrew Beam leapt into the sea of players waiting in the end zone, landing with an exclamation point.

The top-ranked small-school team in the region made a bold statement with Friday’s 49-20 victory over large-school No. 4 Downey (3-1), spoiling the Knights’ homecoming and perfect record.

Escalon is now 4-0 and giving life to a new conversation among regional fans and pundits: Are they the area’s best team, regardless of enrollment?

“I told them there aren’t too many opportunities when you get, as a small school, to go with the big boys -- and a talented (large-school) team like Downey is,” said Beam, now in his second year. “I’m unbelievably proud of our kids and the way they played tonight.”

“This is a once in a lifetime opportunity,” Christensen said.

If so, he and the Cougars didn’t disappoint, setting the tone early with a powerful offensive line featuring four returning starters and a swarming defense led by sack master Jacob Walden.

So prolific through the first four weeks, Downey’s “Air Raid” attack was grounded by the Cougars’ fly-to-the-ball game plan. Quarterback Bryce Gouker was harassed throughout, unable to set his feet and target receivers down field. He completed his first six throws, mostly on quick hitters, but struggled after Downey’s opening drive.

Gouker tossed three TDs, including two to favorite target Lawrence Harris, and didn’t turn the ball over, but the Knights went seven consecutive possessions without a score. After rallying from behind in victories over Manteca and Merced, Downey had no magic left.

“We wanted to make them drive down. We couldn’t give up the big play, which we had seen on film. They were a home run team,” Beam said “We said, ‘Hey, we’re going to drop two back, make them throw underneath and we’re going to rally to the ball. We’re going to say our front four are better than their front five.’ I thought tonight those boys rose to the challenge and proved us right.”

The Knights answered Escalon’s opening score with one of its own, a 16-yard reception by Harris. The two-point conversion failed, though, tilting the field back in Escalon’s direction. Beam’s bunch never gave back momentum, scoring 35 unanswered points and triggering a running clock with about 10 minutes left.

Christensen (164 yards on 12 carries) scored the first of his four touchdowns on the first play after Downey’s opening score. The third-year varsity star burst into space, speeding away from the defense for an 80-yard score. He later found the end zone on runs of 4, 49 and 4 yards. The 49-yard touchdown came on a fly reverse in the third quarter, a play Beam and his staff installed just two days earlier.

Anderson was the difference-maker early on. He had 178 of his 201 yards in the first half as Escalon built a commanding 28-6 lead at the intermission. Affectionately dubbed “The Moose,” Anderson scored on runs of 72 and 5 yards, and his 57-yard burst helped set up the Cougars’ opening touchdown.

Anderson said the Cougars relished their role as the underdog. They exhausted the Knights, attacking Modesto City Schools' most decorated school from whistle to horn.

“We love being the underdog,” Anderson said. “We probably enjoy it more than being favored.”

Escalon now turns its attention to its Trans-Valley League opener at Hilmar in two weeks. The Cougars were beaten twice by the Yellowjackets last fall, including a season-ending, dream-killing 28-18 in the Sac-Joaquin Section Division VI semifinal.

“We have to keep getting better. We got better from last week,” Beam said. “We got to get better week to week and can’t look ahead."