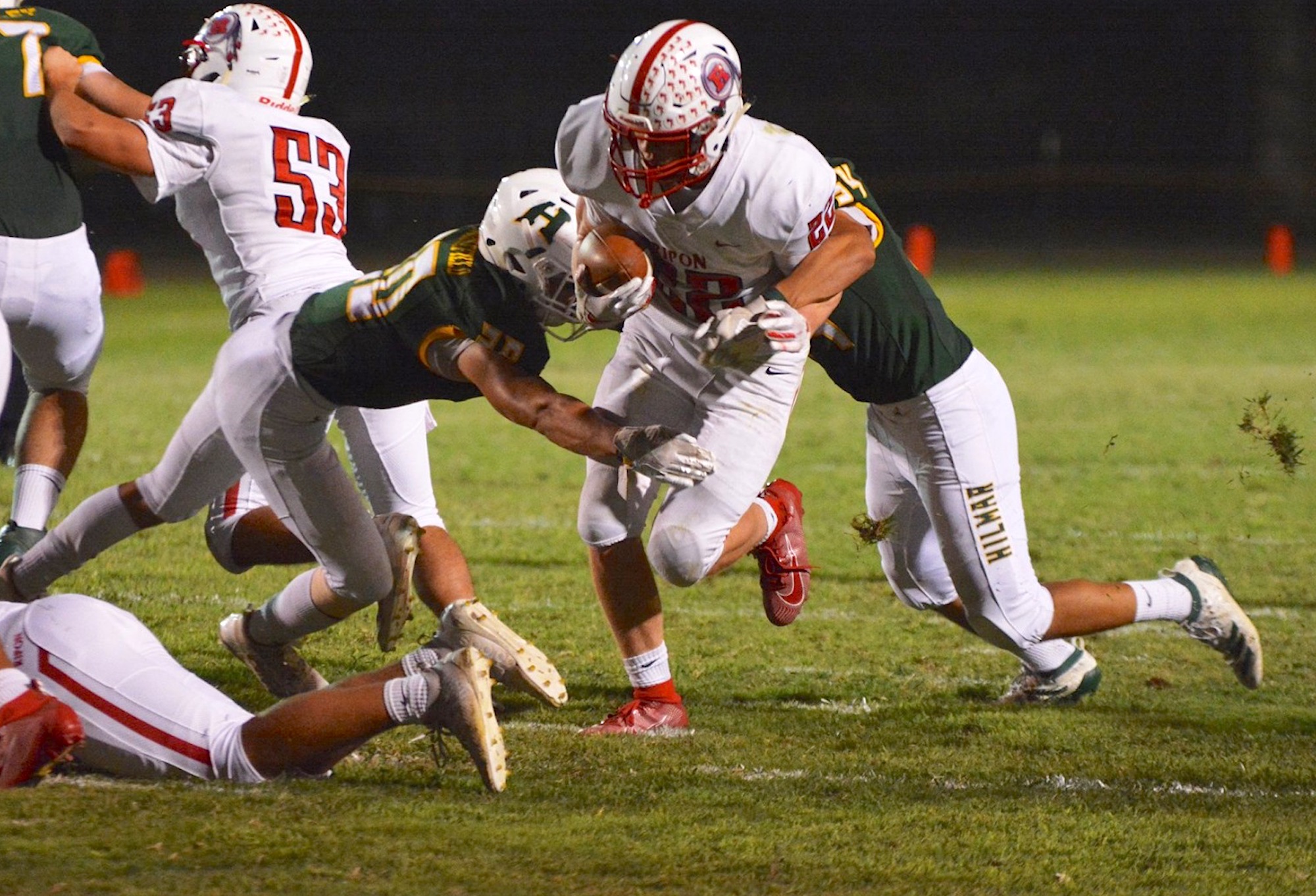 Ripon is chasing its first Sac-Joaquin Section championship since 1996 thanks to senior leaders like Grant Wiebe, a heralded two-way player. (AnnaMarie Silveira)

'Nothing new to us:' Indians embrace underdog status in Saturday's D5 final

No one has taken a more long-distance route to Championship Saturday than the Ripon High Indians.

Ripon, under-manned but not under-loved, has persevered over everything – lack of depth and overwhelming size among other things – to reach the Sac-Joaquin Section Division V title game against Center of Antelope.

Kickoff is Saturday at noon at Hughes Stadium in Sacramento.

“We’ve gotten by with about 20 on the roster and nine seniors who’ve played football together since the youth level,” Ripon coach Chris Musseman said Wednesday. “They’ve played about three seasons’ worth of snaps because they’ve all had to play offense, defense and special teams. They’re the most unselfish group I’ve been around.”

Ripon (11-1) nurses more than a few bumps and bruises – not unlike other finalists – but the Indians can’t be more pleased to be practicing on Thanksgiving morning.

The win in the semifinals will go down as one of the most remarkable in school history, yet the Indians must set it aside for what’s ahead on Saturday.

Center (12-0), the section’s only unbeaten finalist, is a prohibitive favorite. It opened the season by knocking off reigning section and state champion Rio Linda and did not stop as it rolled through the Pioneer Valley League. The Cougars’ average margin of victory is 43-10.

Ripon probably hasn’t seen a more dynamic player than Center’s dual-threat quarterback Michael Wortham, who Musseman has compared to Isaiah Burse, the leader of Modesto Christian’s march to a state title in 2009.

Wortham accounted for seven touchdowns, four passing and three rushing, during last week’s 47-12 romp over Bradshaw Christian. Surrounding him are 215-pound running back Legend Young and receivers Brandon Fernandes and Latrell Harris. The Cougars reached the section final in 2017 and, this weekend, pursue their first blue banner.

Ripon has reached its first title game since 1996, when it claimed its only section football title. All signs point to a difficult assignment.

“Our kids have to have a great game. Center is a team on a roll,” Musseman said. “But we’ve been playing teams that are bigger, faster and stronger than us the last six weeks. Nothing new to us.”

Ripon always has been the most underappreciated power among Escalon, Hilmar and (until this year) Modesto Christian in the Trans Valley League. Then again, the Indians – who shared TVL honors with Escalon and Hilmar this season – are the only team to claim a share of the last three titles and have not finished lower than second since 2014.

So it goes that they’re not stressing much about their underdog status this week. They are led by a clever quarterback in Ilardi, a three-sport athlete who Musseman says is “the smartest kid on the field and the smartest student on campus.”

“I haven’t heard a single thing from this team about ‘my stats,’” Musseman said. “They really care for each other.”