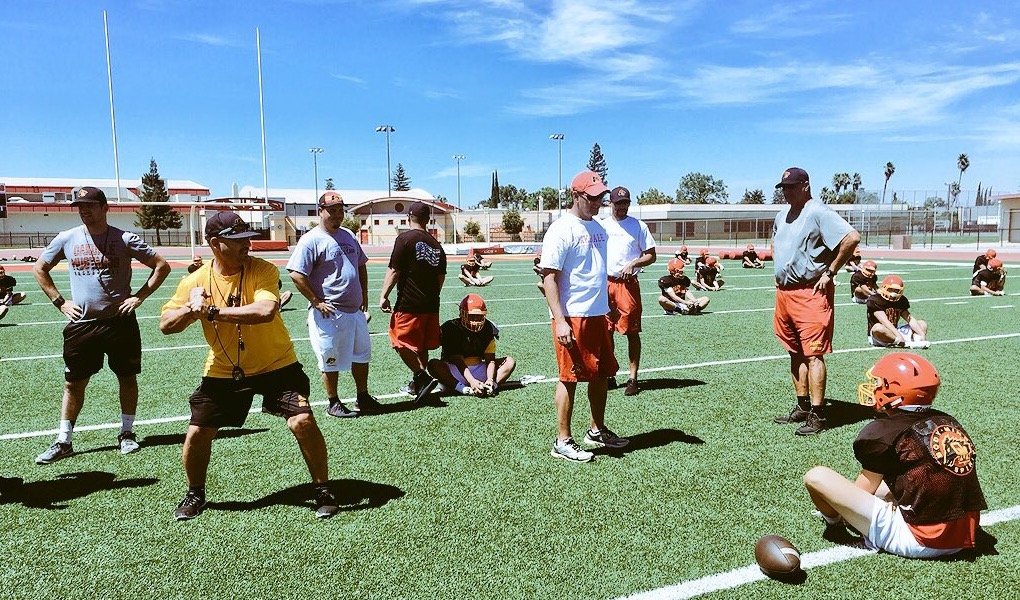 Everything OK in The Corral? Oakdale and its new cast 'ready to shock' foes

Oakdale High football coach Trent Merzon rocked back into a batting stance, wielding an imaginary bat. As his players stretched and readied for practice in the 100-degree heat, Merzon kept the mood light and breezy.

Still sitting in his stance, hands back and elbow up, Merzon needled senior quarterback Hayden Knittel. He wondered if Knittel — or any of his teammates, for that matter — could hit a home run off of Oakdale softball star Lexi Webb, one of the top pitchers in the state.

And so it goes for this year’s cast of unheralded Mustangs, who have been challenged, even in jest, at nearly every turn since May's commencement ceremonies. Oakdale graduated 18 two-year starters, including 2,000-yard running back Cameron Cherry, locker room leader Josh Jacobson and Fresno State defensive lineman Matt Kjeldgaard.

With the turnover has come a class without a marquee name, a class as intriguing as any in Merzon’s 19 years at the helm if only because "no one knows who we are yet," Knittel said.

“There is some pressure, but not that much just because everyone thinks we’re going to be the underdogs,” added Knittel,  who replaces two-year starter Marc Dickson, who led the Mustangs to a section and CIF State championship in 2016.

"Us, as a class, we have nothing to lose. No one knows who we are yet, but I think they will.”

Oakdale has won at least a share of 14 of the last 16 Valley Oak League titles, proving the system doesn’t necessarily need household names or college-bound talent.

It needs only a coach, and senior wide receiver Max Moore understands the catalyst in the program’s sustained success is Merzon and his unwavering commitment.

A commitment to team. To school. And to community.

“Coach Merzon is always serious about football,” said Moore, who might be the only Mustang football player capable of connecting with one of Webb’s pitches. Moore is a fast-rising catching prospect.

"He might be a little more tensed-up during football season, because he has more to do, but he’s a really good coach. He’s there every single day — never misses a practice, never misses a game.”

His message, forged by four Sac-Joaquin Section championships and a state title, has been as relentless as his presence, too: If you work hard and buy into the culture, Oakdale football will remain on schedule.

The Wing-T has produced back-to-back 2,000-yard running backs, beginning with Will Semone in 2016. Semone set a single-season rushing record for the southern half of the section with 2,851 yards, and he emerged from relative obscurity.

Buried on the depth chart at Central Catholic, Semone, now a walk-on at Cal Poly, transferred into the Wing-T, where his combination of speed and tenacity made him an instant star.

The Wing-T may give birth to another star: Highly-touted sophomore running back Zeke Saffar, whom Merzon believes has a chance to be one of the program’s all-time greats by the time he’s done. Saffar blends speed and power, and much to Merzon's liking, he’s coachable.

Saffar starred for the freshman team last fall and was called up for the Mustangs’ playoff run.

Can Saffar help Oakdale shed its “underdog” tag and vie for another VOL crown, just as Semone did two years ago?

“When you think about that 2016 state team, they lost to Sonora and no one thought they’d do good and they won a state title,” defensive end Caleb Kuppens said. “You can’t let what people think guide your path. They’re not with you on this field. They’re not with you in the weight room. You have to trust the process and go 100 percent into the program.

“Trust your coaches. Merzon knows what he’s talking about. He designed this offense and we have a lot of faith in him."

Oakdale, which has won at least 10 games in eight of the last nine seasons, isn’t without fanfare. The Mustangs begin the season No. 4 in Front Row Prep’s large-school poll, but their mettle will be tested in the first five weeks of the season.

The Mustangs then face Archbishop Mitty on Saturday, Aug. 25 in The Honor Bowl at St. Francis High of Mountain View. The game will kickoff at noon. Six days later, Oakdale travels to Merced to face El Capitan.

Its final non-league test comes from great distance: Chaparral of Parker, Colo., a state qualifier the last four seasons, will test its luck in The Corral on Sept. 7.

Valley Oak League play begins Sept. 14 with a trip to East Union, where head coach Willie Herrera has arguably his most talented team.

“No one expects us to be good,” left tackle Wyatt Waterworth said, "but we’re ready to shock them."