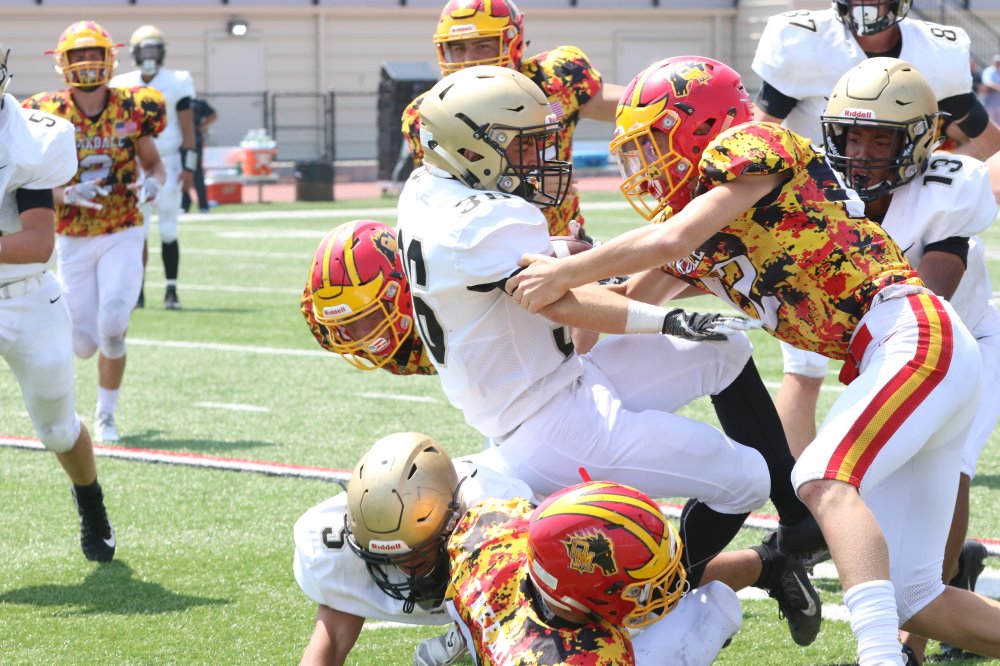 Moments like this were rare on Saturday, Aug. 25, 2018, at the Northern California Honor Bowl. Oakdale was outplayed by Archbishop Mitty in every phase, according to coach Trent Merzon. (Sean Kahler Photography)

Trent Merzon stood in the end zone, bent over at the waist, hands on his knees, as if he'd just had the wind knocked out of him. Metaphorically, he had, in the form of a 42-14 loss to Archbishop Mitty (San Jose) at the 2018 Northern California Honor Bowl.

But in reality, Merzon, in his 19th season coaching at Oakdale, needed a moment to collect his thoughts before speaking to the media.

"We couldn't get off the field and we couldn't sustain a drive," said Merzon, whose team opened the season a week earlier with a thoroughly convincing 49-0 victory over"There's not one side of the ball that was better than the other today. We didn't finish drives, we didn't block them, we screwed up assignments. They beat us in every single aspect, including special teams today. They were better in every facet of the game."

Even though the final score was messy, and despite the fact the halftime margin was 26-0, Oakdale was very much in the game early.  Trailing 13-0 heading into the second quarter, the Mustangs entered Mitty territory for the very first time and face a fourth-and-2 from their 46. Zeke Saffar ran around the right end and picked up about 15, giving his team an opportunity to finish off a drive and make it a one-score game. But a holding penalty nullified the gain, forcing Merzon to send on his punting unit. On the ensuing possession, the Monarchs faced a fourth-and-4 from that very same yard line -- their own 46.

If Oakdale could've gotten off the field, it would've had another chance to half the lead. Instead, Mitty quarterback Shamir Bey picked up the first down on a keeper that gained 20, then scored on a nifty 30-yard run to make it 19-0.

Essentially, that was it.

Oakdale came out strong to start the second half, scoring its first touchdown on the opening drive, but, like a pitcher who isn't able to put up a goose egg after his team has a big inning, the Mustangs' defense could slow the Monarchs and hold on to any momentum.

"We thought we could win this football game," said Merzon. "I like what we were doing coming in. It's a process though. It's a process. We've got a lot of young players that haven't been in the fire like this and we didn't respond real well."

And that's the silver lining for Merzon. He'll find out which players on his team respond well to this setback.

"We're going to focus on us instead of them," said Merzon, whose team travels to take on El Capitan next Friday at Merced College's Stadium '76. "I mean, yeah, theyre' good, but it's us. It's us that breaks down and misses assignments. Doesn't matter what we're playing if we can't figure out what we're doing, if we're going to be hit in the mouth and not be ablel to process thoughts, it really doesn't matter who it is.

"I thought the effort was good, we just didn't play well."