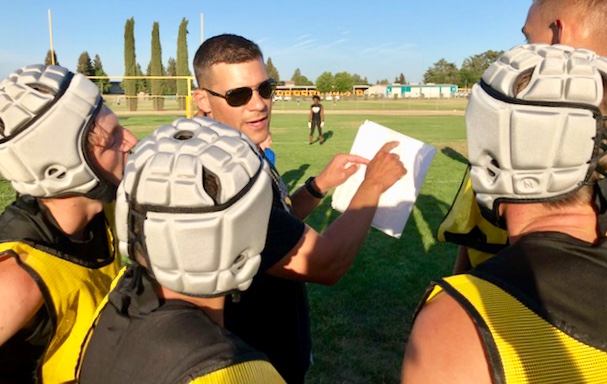 Ripon Christian coach Randy Fasani had hoped to play -- and beat -- a Mother Lode League champion on Friday, but Calaveras was forced to forfeit its season after learning it played an ineligible player.

The Ripon Christian High Knights did not want to advance like this.

The Knights learned Wednesday that they received a forfeit victory over Calaveras, its scheduled opponent Friday night in the Sac-Joaquin Section Division DVI second round, due to Calaveras’ self-reported usage of an ineligible player.

Calaveras called up a sophomore, a JV player who later was deemed ineligible for varsity competition due to a technicality. He saw brief action during the final moments of Calaveras’ 56-13 first-round win over Western Sierra.

The development was revealed by Guy Dossi of the Calaveras Enterprise and later confirmed by the section. First-year Calaveras coach Doug Clark gave his team, which was in full uniform for practice, the bad news Wednesday afternoon.

Clark confessed to a sleepless night, but he also will bring the team together one more time. The team will gather for a ceremonial scrimmage and a dinner Thursday night.

"This is devastating. I couldn't handle walking off the field like that yesterday," Clark said. "We'll walk away tonight on a better note."

Calaveras-RC, which would have been contested at Ripon Christian, was one of the more anticipated games of the playoffs’ second week. Calaveras, 8-3 after last week’s win, shared the Mother Lode League title – its first in six years – with Sonora and Amador.

"It's really emotional for all of us," said Calaveras quarterback Nolan Dart, one of the team's 13 seniors. "It's the biggest blow I've taken in my life."

Ripon Christian (9-1), the No. 3 seed, moves into the semifinals a week from Friday and will meet the winner of the Bear River-Hilmar game. That said, the forfeit victory comes with complications.

When the Southern League-champion Knights take the field next week, they will not have played a game in 22 days. They had a first-round bye after their regular season-ending win over Delhi on Nov. 1.

“That (the layoff) is tough for college and NFL players, let alone for high school football players,” said Fasani, the former quarterback for Stanford and the Carolina Panthers. “However, we won’t use that as an excuse for how we play.”

Schools have forfeited games for similar reasons several times over the years. A month after the end of the 2018 season, Del Oro turned in its section Division II banner and Northern California Division I-A trophy after it played an ineligible sophomore during a first-round section win over Tracy. Eventually, the Golden Eagles defeated Central Catholic 20-17 in the section final.

Jesuit, which would have met Del Oro in the DII semifinals, forfeited its two playoff victories for a similar violation.

Clark acknowledged the importance of section rules but believed the punishment didn't fit the crime. He suggested the targeting of administrators or coaches -- perhaps a suspension of the coach for a period of time the following season.

"To lose on the field is one thing, but having to wonder forever...that's a different feeling," Clark said. "It was a simple clerical issue that we all missed. It had zero to do with the team."