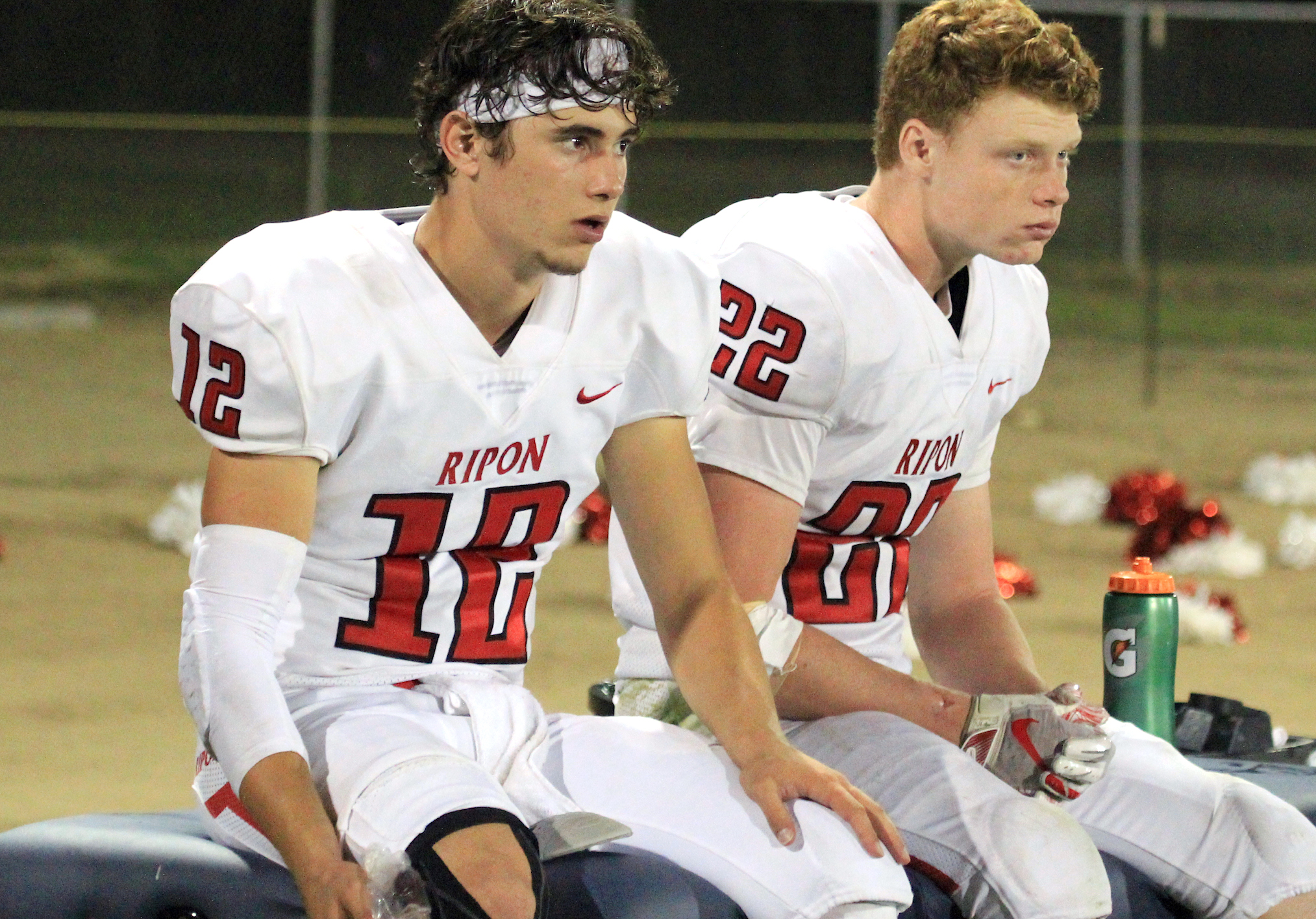 Ripon's Nico Ilardi (left) is likely done for the season after suffering a knee injury in a win over Calaveras and then re-aggravating the injury in last week's loss at Hilmar. Ilardi starts at quarterback, defensive back and punter for the Indians. (Samantha Schmidt)

Three defending league champs have battled through major injuries as the season reaches the half-way point.

Two of the teams have absorbed setbacks while the third, 2018 Valley Oak League champion Central Catholic (1-4, 1-0), appears to have stabilized.

Running back Minaya Olivo bounced back from a concussion, which sidelined him the previous week, to score the winning touchdown during the Raiders’ pulsating 27-26 victory over Manteca.

Coach Roger Canepa said Olivo has recovered from the concussion but is slowed by a groin injury. He is expected to play Friday night against unbeaten Sierra (1-0, 5-0).

“We might hit 30 (the roster size) for the first time,” Canepa said Wednesday. “We’re getting healthy and better. Up front we haven’t had the same people on the field all season.”

The Raiders, who labored against elite non-league competition, prepare for a Sierra team gaining momentum under third-year coach Chris Johnson. Running back Kimoni Stanley has rushed for 673 yards and 13 touchdowns.

“This is one of Sierra’s best teams, but we are at home,” Canepa said.

Meanwhile, Ripon (4-1, 0-1) tries to regroup after a difficult 38-27 loss at Hilmar to begin the Trans Valley League season. Here’s how bad it got for the Indians: They had 19 suited up for the Hilmar game but lost five by injury, including quarterback Nico Ilardi and two-way starters Grant Wiebe and Brandon Rainer.

Ilardi, who doubled at QB and defensive back and also punted, probably is out for the season.  Wiebe will miss at least this week’s game at Riverbank, but Rainer should see limited action against the Bruins.

Ilardi suffered his knee injury two games ago at Calaveras and practiced sparingly the week of the Hilmar game. He was done after he aggravated the injury during the first quarter against the Yellowjackets.

“Nico is a special player and is not replaceable,” Ripon coach Chris Musseman said. “Aaron Wood will step up at quarterback, but he’s not Nico.”

The Indians, a proud program that has claimed a share of three of the last four TVL titles,  promoted eight JV players to the varsity this week.  They point toward an important game against Livingston, followed by a bye and their showdown at home against Escalon on Oct. 18.

“We’ve got to be perfect from here on,” Musseman said. “There is no more margin for error.”

At Big Valley Christian, coach Brian Berkefeld and the Lions cope with the season-ending loss of senior running back Javyn Drobnick, who rushed for 2,211 yards (third in the Sac-Joaquin Section) in 2018.

Drobnick, a senior, played only three quarters during parts of two games before he suffered a knee injury against Le Grand. He already had picked up 335 yards and four TDs.

No team, regardless of the level, can cover for the loss of someone who accounted for 50 touchdowns and about 4,000 yards the last two seasons. Drobnick’s absence is why Big Valley Christian has started 1-3.

“Javyn is still a part of our family and still attends all our practices and games,” Berkefeld said. “We’re not asking anyone to do more than they did before. It’s time for our other running backs to shine. We just need them to play like BVC plays football.”

Big Valley also misses tight end-middle linebacker Blade House (knee), who was injured two weeks ago against Waterford. Berkefeld hopes he can return by the end of the regular season.

The Lions will be helped, however, by the addition of four transfers who will see their first action Friday night at Delta of Clarksburg.  BVC begins the defense of its Central California Athletic Alliance title next week against Stone Ridge Christian of Merced.