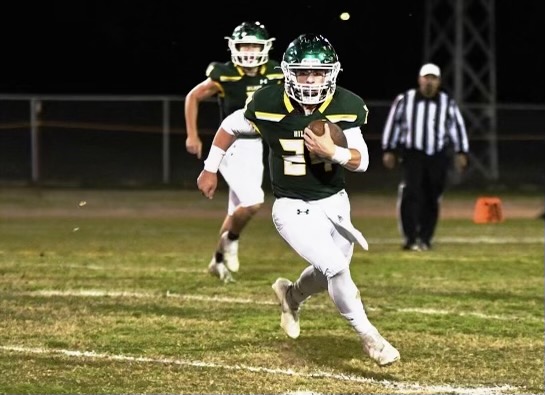 Since taking over as quarterback, Jason Pimentel has guided Hilmar to four consecutive wins and a second-round showdown at Sonora, a team the Yellowjackets have already beaten once this season.

'Goal is to win state': Hilmar finds its groove again behind dual-threat QB

HILMAR -- As the field in the Sac-Joaquin Section shrinks, the gridiron at Hilmar High grows more and more crowded. From coaches to alumni to community members, head coach Frank Marques playfully jokes that his late-fall practices become the epicenter for all activity in this rural town.

And he wouldn’t have it any other way.

During a time when coaches become guarded with how much access they allow or how much information is shared about their team, Marques throws open the shades and invites everyone to take a look.

“This is the fun season for us,” said Marques, now in his 19th season as the Yellowjackets coach. “We’ve got 14 coaches at every practice and every one of them is coaching. Our kids are getting coached on every rep. It makes us a strong program.”

Hilmar is a perennial playoff contender and one of the section’s most decorated programs. The Yellowjackets have won eight section titles, third-most in the region, trailing only leader Central Catholic (18) and Trans-Valley League rival Escalon (nine). Hilmar’s last section title came in 2018, the same year it rolled to a CIF State Division 6-AA championship.

“We’ve always believed this: Ultimately, our goal is to win a state title, and then win a section and league title,” Marques said.

Hilmar was knocked out of the running for a TVL title early in the league schedule, suffering back-to-back defeats to Ripon and eventual champion Escalon. Since then, though, the Yellowjackets have righted the ship behind a dual-threat quarterback and an understanding that its ultimate goal -- a CIF State bowl -- remained in play.

Hilmar has won four consecutive games, including a 61-27 decision over Los Banos in the first round of the section Division V playoffs. The sixth-seeded Yellowjackets (9-2) head up the hill to No. 3 Sonora (6-3) on Friday for a small-school matchup laced with intrigue.

Then the top-ranked team in the region, the Yellowjackets edged the short-handed Wildcats, 28-21. Like Hilmar, the loss triggered the Wildcats’ season-long win streak (six games).

“Our goal is to get them ready for the playoffs,” Marques said. “The league title was gone, but we were OK. We have a long-term plan. I told the kids, ‘We’ll be OK. We have some adjustments we have to make, but it’s not the end of the world.’

“We were focused on the playoffs, and right now, we’re in a good spot as far as the team goes. Our team has really gelled together.”

And they’ve rallied around a quarterback thrust under center midway through the season. Hilmar has depended heavily on Jason Pimentel’s ability to use his legs to improvise, keep defenses honest, and ultimately, create big plays in the Yellowjackets’ Spread offense.

In many ways, Pimentel was always the ideal fit. He just wasn’t Marques’ first choice. Hilmar began the season with Cameron Moak (1,057, 49.6 completion percentage, 13 touchdowns and seven interceptions) under center, but the offense was slowed by turnovers. In the loss to Ripon on Sept. 10, Hilmar failed to find the end zone, settling for a first-half field goal. Seconds before the half, Hilmar was stopped at the Ripon 1-yard line, a play that defined the game.

Under Marques, Hilmar has thrived with a dual-threat quarterback dating back to Nathan Costa, arguably the greatest player in school history. Costa completed his collegiate career at Oregon and is now a senior offensive analyst at his alma mater.

“We have to have a quarterback that’s a run threat,” Marques said. “With our offense, it gives us a different dimension. (Pimentel) was always there, our slot receiver and running back and backup QB. With our offense so much depends on us running the ball. After the loss to Escalon, we made the quarterback change and he’s been our guy ever since.”

Pimentel hasn’t topped 100 yards passing in the last three games, but has rushed for more than 100 yards twice. He’s averaging 8.1 yards per carry. In last week’s win against Los Banos, Pimentel rushed for 115 yards and one touchdown on 11 carries.

“Now a team has to defend the whole field. Before, our quarterback (Moak) wasn’t much of a run threat; (teams) didn’t have to worry about him running. Jason is a really good running back. He can throw decently, but now they have to prepare (for his legs),” Marques said. “You have to have that if you’re going to run the Spread. A lot of our offense is predicated on a running quarterback. It started with Nathan Costa and it’s carried on. Our success depends on having a mobile quarterback. Jason gives us that look.”

Sonora coach Bryan Craig hardly recognizes Hilmar’s offense. It isn’t the same unit that rallied to beat his team back in September. Today, they’re much more explosive with Pimentel handling the ball.

“They’ve got a different quarterback and changed the way they do things,” Craig said. “Not that the other kid was bad, but this kid (Pimentel) is a little more athletic. They’re a different team than what we saw earlier.”

In more ways than one.

Hilmar is peaking at the right time, a scary proposition for the playoff field, and now they attack with a dual-threat quarterback, a coaching staff reinforced by its lower levels, and the support of an entire community.