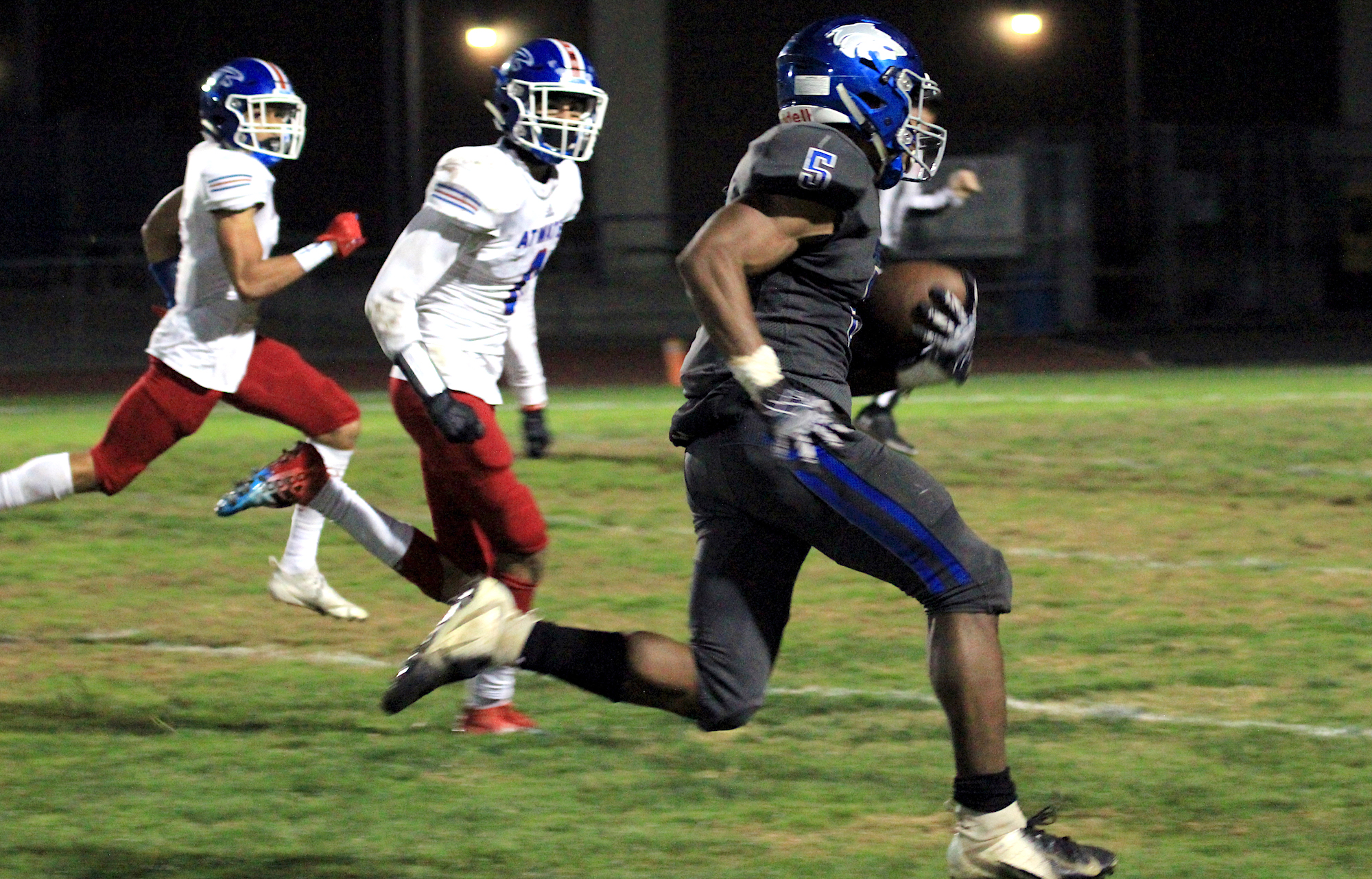 Sierra running back Kimoni Stanley rushed for 241 yards and five touchdowns in a 63-14 victory over Atwater on Friday, Nov. 15, 2019, in the second round of the Sac-Joaquin Section Division IV playoffs. (Samantha Schmidt)

MANTECA -- Sierra High’s 63-14 victory in the second round of the Sac-Joaquin Section Division IV playoffs was captured best by one moment midway through the third quarter.

All-around talent Matt Dunham bolted up the home sideline, lowering his head -- and the boom -- on two Atwater defenders, keeping his feet in the process. The play fired up the Timberwolves’ sideline, but none more so than defensive coordinator Mike James who stepped a few yards onto the field and barked a message into Dunham’s ear for all to hear: “I’ve seen better. I’ve seen better.”

As impressive as the Timberwolves were on Friday evening, forcing six turnovers and topping 60 points for the third consecutive week, they’re not content with a handful of big plays in the middle of November. The boys in blue are hunting “better” … and a blue banner.

Forged in the fires of the Valley Oak League, Sierra (9-3) has its sights set on its first section championship since 2015 and a potential rematch with league rival Oakdale (8-3), which topped the short-handed Timberwolves on Oct. 11.

“I don’t know if you can call this a signature win, but let’s be honest, it is a big win against a good football team,” Sierra coach Chris Johnson said. “They (Atwater) got a lot of talent and they’ve put up a lot of points against some really good football teams. Do we feel good about this? Yeah, but …

“Our league is so tough, it prepares you for games like this. … How fun is it to be able to play football at this time of the year? One more week with the family, man.”

On a night when Sierra’s offense chased records, the defense, anchored by linebacker Holden Fishburn and a mean-spirited defensive line, was the catalyst.

The Timberwolves forced six turnovers, including a scoop-and-score by lineman Josh Valdez, and the first-team defense limited the Falcons to a single score on the opening drive. Valdez picked up a bouncing ball around the 48 and was ushered into the end zone by a convoy of teammates, helping to turn this all-region showdown into a rout.

“For (the defense) to have that many turnovers, that made our offense way happier than we’ve ever been,” said junior running back Kimoni Stanley.

There were smiles abound in the Sierra offensive huddle, too.

Stanley, a next-level talent with plus-speed and strength, raised his stock with another 200-yard performance. He rushed for 241 yards and five touchdowns.

Quarterback Shane Johnson added two rushing touchdowns and Dunham triggered the scoring spree with a 9-yard run on the game’s opening possession. However, it was Dunham’s carry along the home sideline in the third quarter -- and coach James’ words that echoed down the  sideline -- that embodied the spirit of Sierra’s push.

With a straight-line mentality, Sierra won’t let itself be denied.

Since a 42-12 loss to city rival Manteca, the Timberwolves have scored 194 points in three games and nearly matched a school single-game playoff scoring record with Friday’s outburst. In 2014, Sierra defeated Rosemont, 69-37.

“Our team loves contact. Our team loves to hit,” Stanley said. “When we get a chance to hit somebody, we’re going to take it. We’re not going to stop until the whistle blows.”

The fourth-seeded Timberwolves will travel to defending section champion Rio Linda (9-2), the tournament’s No. 1 seed. Rio Linda routed No. 8 Vanden, 41-14, on Friday.