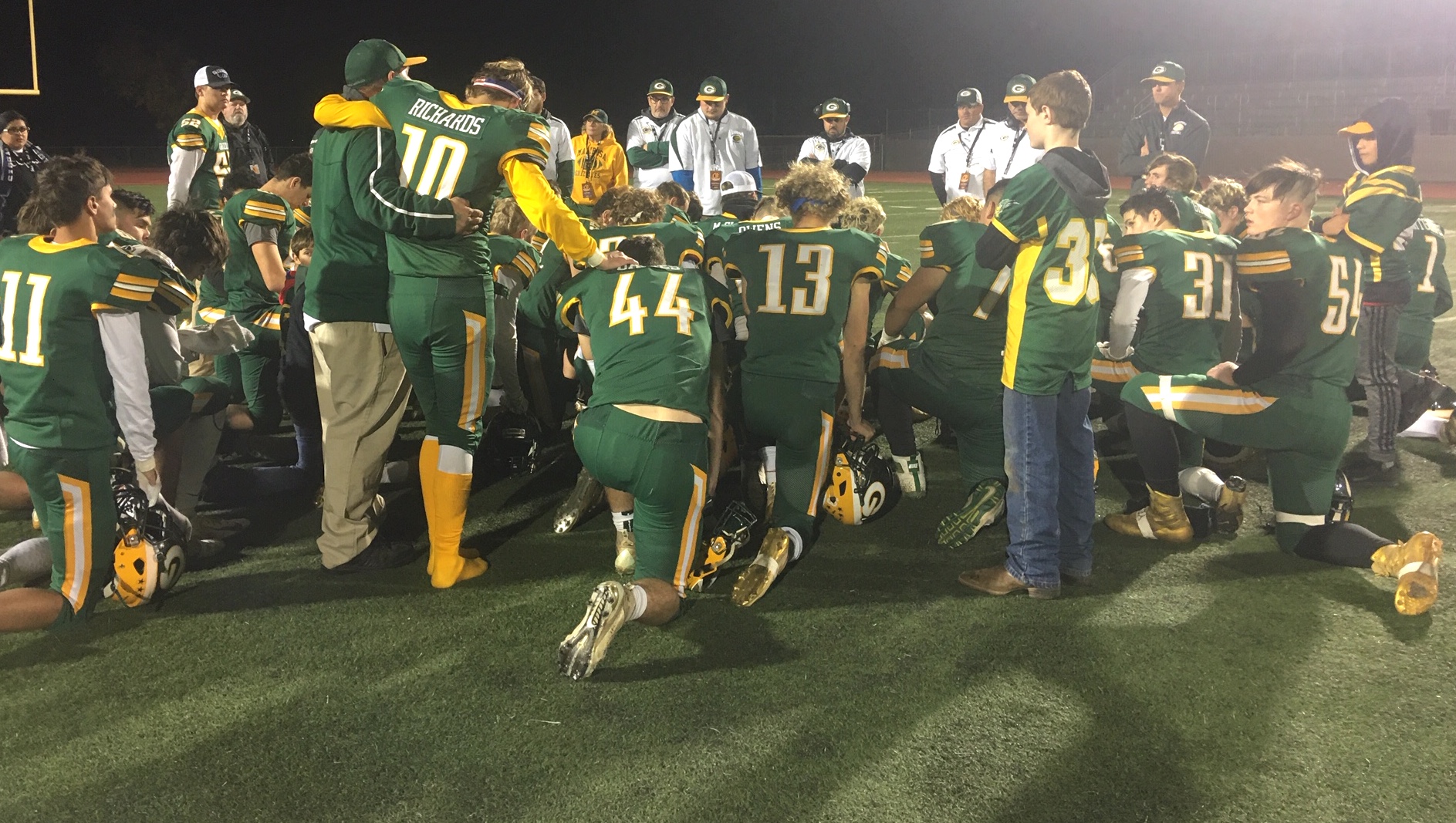 Mariposa's hope for a CIF State title was unraveled by four turnovers, including three in the second half during a 21-14 loss to Lincoln of San Francisco on Friday, Dec. 6, 2019.

MERCED – The Mariposa County High Grizzlies, the first football team in school history to qualify for a Northern California title game, formed a circle and hugged their coaches one more time.

It was over – the wins, the losses, the practices and the camaraderie– and the Grizzlies dearly wished for a post-game celebration.  But four turnovers, three in the second half, cost them an emotional 21-14 loss to Lincoln of San Francisco in the CIF NorCal Regional 7AA final.

“The turnovers were the difference in the game,” Mariposa coach Robert Stitt assessed. “I’m real proud of the guys. They did a great job.”

Lincoln (11-1) will purse a second straight state title next week against Gardena, a 27-14 winner over Francis Parker of San Diego. Conversely, the Grizzlies (8-5) motored back up Highway 140 with bittersweet memories. A 7-6 lead halftime devolved into mercurial ups and downs, more the latter than the former, during the final two quarters.

“It was a good matchup, but we should have had them for sure,” said senior fullback-inside linebacker JC Davies, a game-long force for Mariposa. “Little mistakes.”

Through it all, the Grizzlies rallied one more time in the final minutes. Lane Holt blocked a punt and gave Mariposa decent field position, and a brilliant one-handed catch by Logan Donati on fourth down gave his teammates one more series in Lincoln territory.

The Grizzlies reached a 4th-and-1 at the Mustangs 22 yard line, when Donati was stopped shy of a first down with 54 seconds to go. So ended Mariposa’s bid for Cinderella’s slipper, begun when the Grizzlies dethroned Southern League champion and 2018 state champion Denair in overtime last week.

Lincoln bused three hours over the Altamont to Veterans Stadium at Golden Valley High, while Mariposa traveled about 40 minutes down the hill  for the high-stakes game staged on a chilly and breezy – but rainless -- Friday night.

Fortunately for the Mustangs, they brought with them running back Luis Contreras, who played much larger than his 155-pound frame. He carried the ball 39 times for 214 yards and touchdown runs of 27 and 21 yards, plus a 2-point conversion.

Figuring out Lincoln’s elementary plan was easy. Stopping it was another thing. Contreras, pounding effectively between the tackles, gained momentum in the second half. His 27-yarder late in the third quarter, on the next snap after a lost Mariposa fumble, put Lincoln ahead to stay.

“He was good, but their line was big,” Davies said. “They weren’t the biggest we’ve seen this year, but they had good technique.”

For all he accomplished, Contreras’ most important contribution arguably came on defense. Mariposa, poised to turn a Lincoln fumble into points, reached the Lincoln 9 early in the second half.

Donati (27 carries, 133 yards, TD), pushing forward on a gain from the 9, lunged for the goal line but Contreras forced a fumble recovered by teammate James Walsh at the 3.

“It was just me and him,” Contreras said. “I saw him try to go for the touchdown. I put my helmet on the ball, and he fumbled.”

From that point, Lincoln forged an advantage over the final 14 minutes.

“The one at the goal line hurt us big-time,” Stitt said. “But he (Donati) was the reason why we’re here. He’s been great for us.”

Mariposa surprised Lincoln by gaining 387 yards in total offense, one of the most productive nights by a Mustangs opponent all season.

Sophomore quarterback Wyatt Green, 6-foot-2 and blessed with a lively arm, kept the Lincoln defense honest by completing 15 of 26 passes for 233 yards.  His 10-yard slant to Johnathan Chapman closed the deficit to 21-14 midway through the final period.

Problem was, the Grizzlies didn’t parlay all those yards into enough points.  Meanwhile, Contreras and the Mustangs were more resourceful.

Quarterback Jonas Francovich made his single pass completion count – a play-action 67-yarder to the 6-4, 225-pound Walsh for the game’s first score. The rest was left to Contreras.

“We had a Plan A and a Plan B, and neither was working,” Stitt said. “They were a good team. They blocked well. They just beat us upfront.”

The game wasn’t easy for either side. Lincoln coach Phil Ferrigno didn’t like his team’s first half and let the Mustangs know at the break.

“We had a little talk. They picked it up,” the excitable Ferrigno said. “If this was going to be our last game, I didn’t want to be playing like this.”

Ferrigno also called out praise to Mariposa for extending his team further than most.