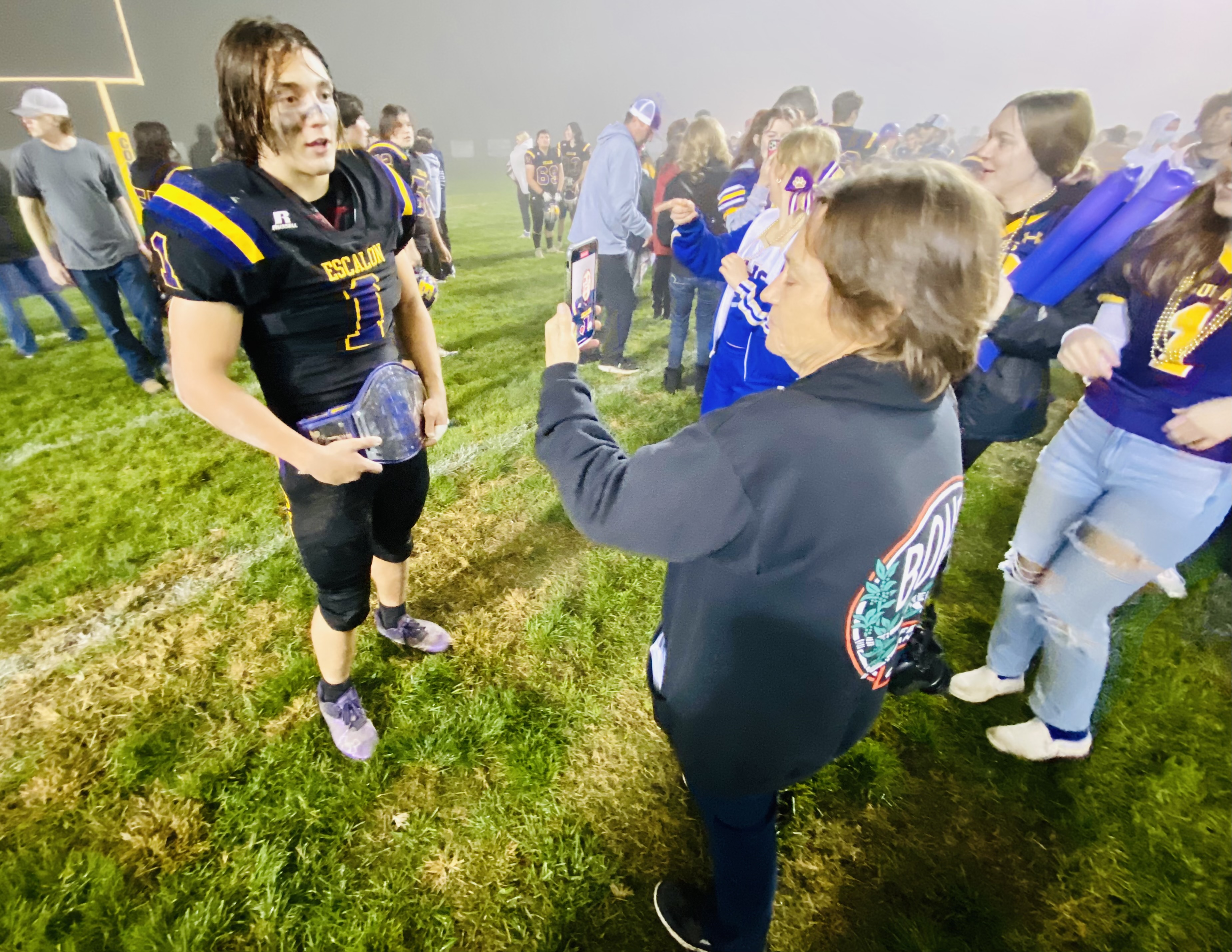 ESCALON — Walking back from the locker room at halftime, Escalon football coach Andrew Beam peered down the path that leads to Engel Field and wondered ...

Uh, where is Engel Field? The stadium, the lights, even the din from the roaring student section had been blanketed by a thick fog that moved in quickly.

Worry not, coach, the top-seeded Cougars (10-1) found their torch bearer, their light in the dark: Junior Ryker Peters, one of the Trans-Valley League's toughest middle linebackers, who is fast becoming a force at fullback, too.

Peters rushed for a season-high 205 yards and scored three touchdowns, but it was his blocked punt that sparked Escalon to a 39-12 victory over No. 8 Woodland on a night when the visibility was almost comical.

His hair spilling out the back of his helmet, Peters flew through the kicked football, batting it into the end zone where he recovered it for a safety and an 11-6 lead at the half.

Escalon never looked back as many in the junior and senior class secured their first Sac-Joaquin Section playoff berth.

"This is fun. These are things that lead to memories that guys are going to talk about 10, 15, 20 years from now — that playoff game against Woodland when the fog rolled in at halftime," Beam said. "It adds to the atmosphere of high school football."

The Cougars overcame an early deficit with a 33-0 blitz to clinch a Sac-Joaquin Section Division V semifinal appearance. Escalon will host ancient rival Ripon, the reigning D-V champions, next Friday in a clash of the region's top small-school programs.

Third-seeded Ripon (8-4) pulled away from Pioneer, 39-20, earning a rematch with its rival just eight miles down the road.

Escalon captured the Trans Valley League by running the gauntlet at 6-0, two games clear of the Indians and Hilmar in the final standings. Escalon topped the Yellowjackets 24-14 on Oct. 1, and then three weeks later, overcame four turnovers in a 21-7 victory over Ripon. Beam knows the difference between the TVL's brass was much closer than the final scores indicate, and he expects  Friday's semifinal to be played to the inch.

"Flip a coin in the TVL this year. I know we were able to run that gauntlet and finish as TVL champs, but in any of those games with the Big Five (including Livingston and Hughson) in the TVL, those games could go any way," said Beam, draped by his children. "I don't anticipate the playoff game to be any different. The nice thing is we get to come to Engel; we'll be at home. But when you're that familiar with each other, there are no tricks anymore. It's going to be fun and it's fun for our league."

Know who was having the most fun on a foggy Friday night?

Peters, who was awarded a boxing-style championship belt by Beam for gutting Woodland with his straight-ahead running style. Peters had 104 of the team's 120 rushing yards at the half, including a 17-yard touchdown run early in the second quarter to give Escalon the lead for good, 9-6.

Nine minutes later, he fell on top of his blocked punt in the end zone for a safety.

"He's always been a defensive specialist. He's had an outstanding year at middle linebacker and there are some accolades coming to him when the TVL awards are released," Beam started, "but on offense, you look at our last three games, he's had close to 100 in all three games and (205) tonight. He's in incredible shape, which is allowing him to go both ways now, and he's starting to figure out how to be a fullback for our offense."

Peters began the season in a platoon with senior JP Lial, who also found the end zone on Friday, bouncing off defenders for a 9-yard score. However, a stubborn knee injury has limited Lial in the last three weeks and created opportunity for Peters, who has averaged 132 rushing yards during that stretch.

On Friday, with the Cougars' season tested early by the Wolves, Peters pieced together a career performance. He recorded 12 tackles, set season-highs in carries (13) and yards (205), and showed his burst and conditioning with a 65-yard scoring run with 5:41 left.

Game — give him the belt.

"I'm still young. I'm a junior (and) this is my first playoff game in all of high school," Peters said. "I knew I had to step up in some kind of way, and I guess today I really showed it. I'm not very elusive, but if I can bring the power, I will."

As Woodland's season unraveled, so too did its composure.

At one point, the Wolves (9-3) had about as many unsportsmanlike penalties as they did points. A series of flags following Logan Anderson's 2-yard touchdown run in the fourth quarter moved the ensuing kickoff to the Woodland 30. Beam opted for the onside kick, which bounced over the first line of Wolves and into the lap of Cody Parker.

On the very next play, Lial bounced into the end zone from the 9, drawing a late hit and another unsportsmanlike on the Wolves.
Escalon survived its first of the postseason, but with Ripon rolling into town next week, Beam understands the Cougars need to be cleaner. Escalon turned the ball over three times, all three off the hand of quarterback Donovan Rozevink.

"That first time we played them we did not play well on offense. We turned the ball over four times, but we still found a way to win, which says a lot about our character," Beam said. "There is a ton for this young group that we need to lean up on both sides of the ball to be able to win next week, or we will get beat. ... It's a free for all now. It's about who's playing fault-free, mistake-free football."