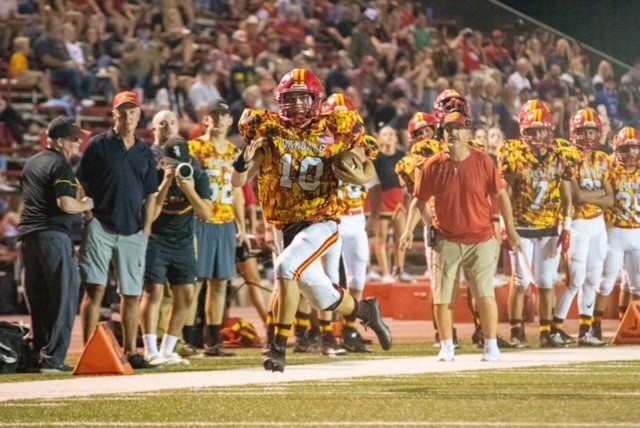 Senior quarterback Mickey Merzon keeps a handoff and runs down the sideline for one six rushing touchdowns on Friday, Sept. 9, 2022. (Diego Hernandez)

OAKDALE – One week after a narrow loss to Aptos, the Oakdale High football team righted the ship against another out-of-section opponent.

A reigning San Francisco Section champion, Balboa had no chance against the Mustangs at The Corral, one of the toughest venues in all of Northern California. Oakdale scored eight touchdowns in the 55-0 victory, including six on the ground, one through the air, and another coming from the defense.

FrontRowPreps.com sent photojournalist Diego Hernandez to the game to capture the Mustangs' bounce-back victory. His shots tell the story of Oakdale domination. The Mustangs, now 2-1, travel to Orinda to face Miramonte on Friday, Sept. 16.