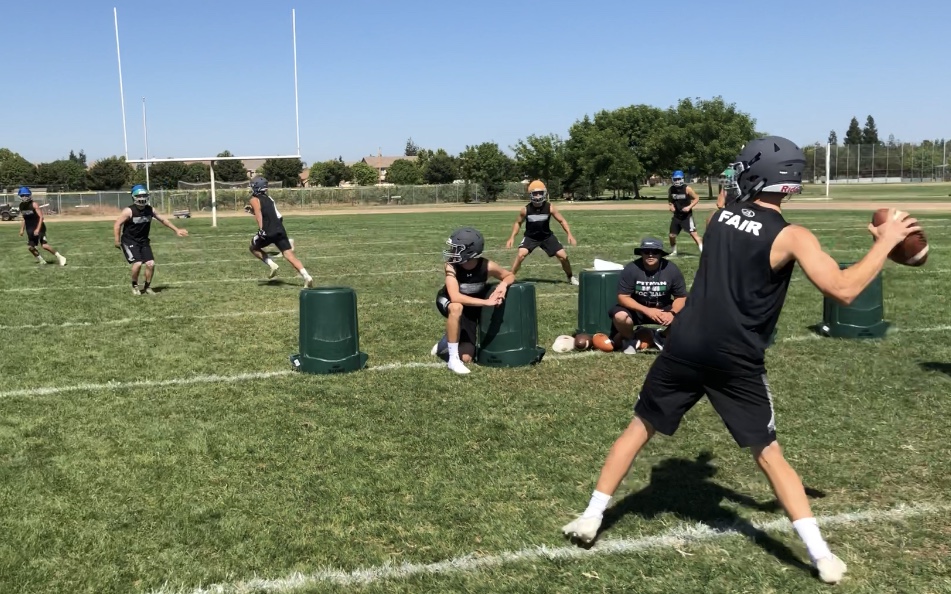 Pitman High's Treyton Fair looks for a receiver downfield during the first day of practice on July 23, 2018, at Pitman High in Turlock. (Joe Cortez)

Year in and year out, the Pitman High football team plays fast, physical and tough, just like its head coach, Thomas Nelson Tyler — TNT — a former keg-of-dynamite noseguard on the powerful Davis High teams of the late 1970s under legendary coach Don Lanphear.

Actually, when you look at Tyler, nothing about his thick, powerful frame indicates "fast." But "physical" and "tough" … no doubt.

Pitman is coming off a 5-5 season, the first time in school history that the Pride failed to end the season at least one game above .500, and finished third in the Central California Conference, This year, along with crosstown rival Turlock, Pitman is leaving the CCC and will join with remnants of the now-defunct Modesto Metro Conference — Downey, Enochs, Gregori, Modesto — to form the Central California Athletic League. To get ready for league play, the Pride will open Aug. 17 against Napa at Joe Debely Stadium, then hit the road for games at Lincoln and Pleasant Grove, then return home to face Bullard and Summerville, then a bye before opening CCAL play against Enochs in Modesto.

All of Pitman's preseason opponents are perennial playoff contenders, because when you gain a reputation for playing fast, physical and tough, not many teams want you as a non-conference opponent. So, Pitman will be honed to a razor-sharp edge when it faces Enochs on Sept. 28. But it also means the Pride could be less than 100 percent after the tough non-conference slate.

One player Pitman can't afford to be without is senior running back Payton Bass.

The brother of Pitman graduate and MJC standout Devan Bass, the younger Bass is coming off an ACL injury, but figures to be the Pride's main offensive weapon. And he's ready for the challenge, and the inevitable comparisons to his brother that surely will come.

"He's doing really good at MJC," said Bass. "I just try to get myself better as an individual so I can be better in college. I'm back at 100 percent."

Bass will need to be, because not only is the preseason fraught with danger, but the CCAL promises to be one of the tougher leagues in the region with fellow two-time defending CCC champ Turlock, reigning MMC champ Gregori, which unseated five-time reigning champion Downey last year. Plus there's an improved Enochs team and Modesto, which has been in the MMC mix for the past several seasons.

All will be eyeing that first trophy awarded by the new league.