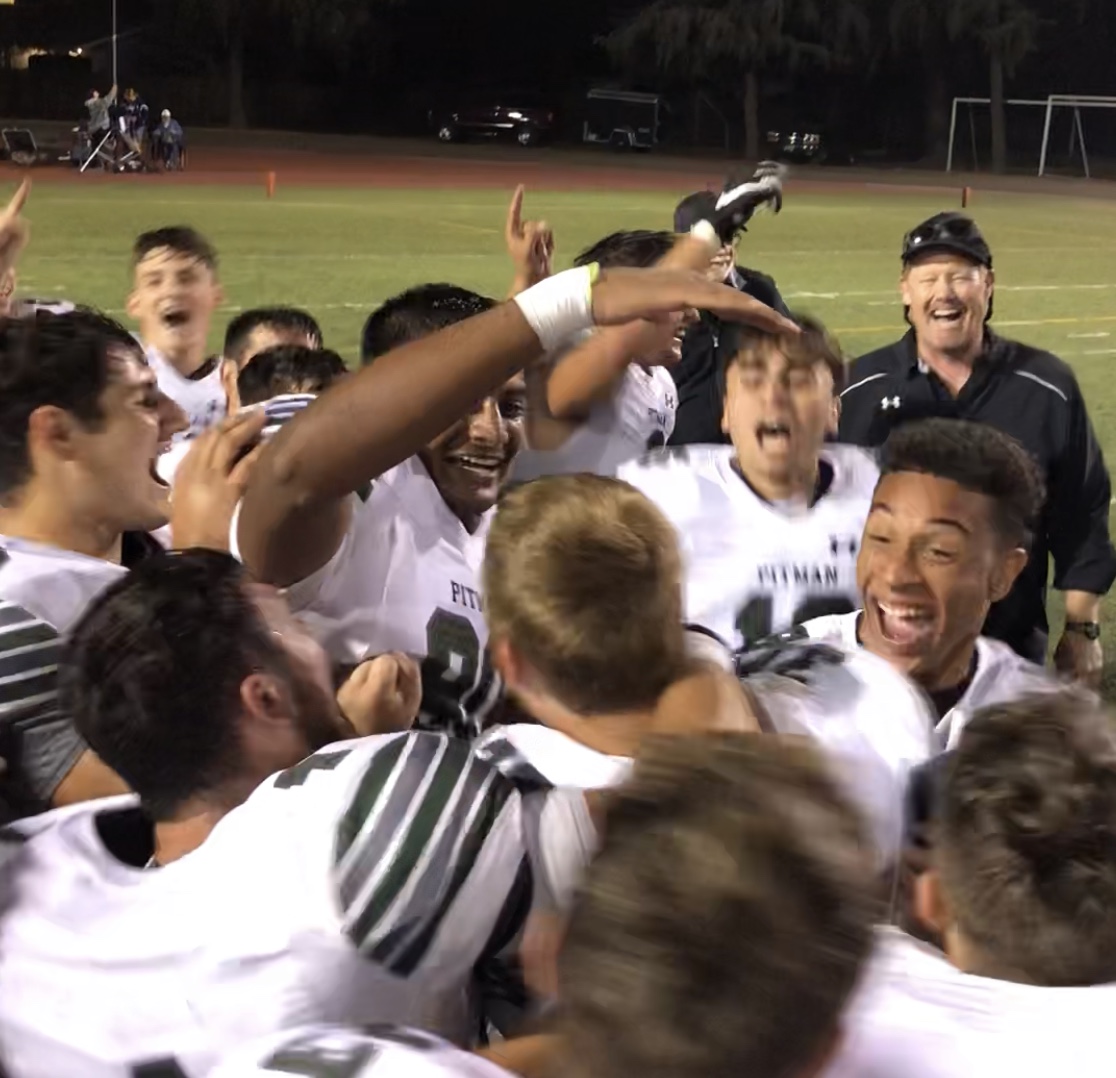 Pitman HIgh coach Tom Tyler, far right, watches his players celebrate a 37-33 victory over Downey that kept the Pride unbeaten and sets up an all-or-nothing showdown with rival Turlock in next week's Harvest Bowl

Now Pitman High gets the game it wanted all along.

Marcus Garza's 2-yard touchdown run with 76 seconds in Friday night's Central California Athletic League contest lifted the Pride to a 37-33 victory over Downey and set up a winner-take-all showdown with crosstown rival Turlock next week at Joe Debely Stadium for the league title.

The Pride trailed by as many as 10 points in the fourth quarter, but whittled the lead to three when Payton Bass hauled in a 52-yard scoring strike from quarterback Treyton Fair. Bass came up big all night long, racking up 172 yards bn 18 carries and two receptions for 67 yards, while Fair was and efficient 9 of 10 for 140 yards the key TD toss to Bass.

After Bass scored to cut Downey's lead to 33-30, it was up to Pitman's defense to hold serve.

The Knights crossed midfield on the ensuing drive, but quickly faced fourth-and-2 on Pitman's 31-yard line. Robert Rivera (15 carries, 95  yards) was called upon, but the 5-foot-5, 125-pound junior was unable to move the pile and gained just one yard. Pitman took over and embarked on an 11-play, 70-yard drive that was capped by Garza's 2-yard burst that made it 36-33.

Downey was get ready to run its two-minute offense.

"We practice it every Wednesday," said Downey coach Jeremy Plaa. "We work on situations ... one minute left in the game ... but we kind of overlook the kickoff return part of it."

Speckens lined up to kick off as Pitman planned to scorch a liner to Jordan Wilson in the second level, away from Rivera, who returned the ball 75 yards to Pitman's 11 in the third quarter, setting up a Wilson TD that gave Downey the lead at that point. But instead of getting the ball into the second level, Speckens' laser pinballed off a Downey player on the front line and ricocheted back into the arms of a Pitman player.

"We drew it up like that," Pitman coach Tom Tyler joked after the game. "No, we were just trying to keep it away from (Rivera)."

The Pride was actually kicking in the direction of Wilson.

"We were expecting the lineman to get out of the way," said Speckens. "I was trying to kick it toward (Wilson).

Had the Knights been able to recover the kick, they likely would've had good starting position with more than a minute to play a timeout to burn. But Speckens' kick came in hot, not allowing for.

The Pride got off to a quick start, taking a 6-0 lead on a Jakob Partida 1-yard run with less than three and a half minutes elapsed in the contest. But Downey countered on its next possession when quarterback Bryce Gouker connected with Anderson Grover for an 11-yard scoring strike.

Wilson gave the Knights a 13-6 lead with his 2-yard TD run, and the Pride trimmed the deficit to 13-0 on Speckens' 22-yard field goal, then regained the lead with Julian Lindo's 2-yard, a scoring drive that was set up by Joey Vasquez's interception of Gouker.

After halftime, the lead see-sawed three times, with Downey taking a 20-16 advantage on Gouker's 4-yard strike to Bryce Peterson, with Pitman coming back on Garza's first TD of the game to make it 23-20. A 4-yard run by Wilson put the Knights back in the lead at 26-23.

Downey extended its cushion to 10 when it forced the Pride to go three-and-out on its ensuing possession and then Gouker connected with a wide-open Bronson England from 24-yards out.

Pitman got right back into the game, however, starting the last drive of the third quarter on its own 11 and capping the drive with just over a minute gone by in the fourth quarter when Bass was left wide open and hauled in a Fair pass that went for 52 yards.

"As good as that team was, Bass definitely stood out," said Plaa, whose team has been eliminated from winning even a share of the CCAL crown. "He was the one guy we just couldn't stop."