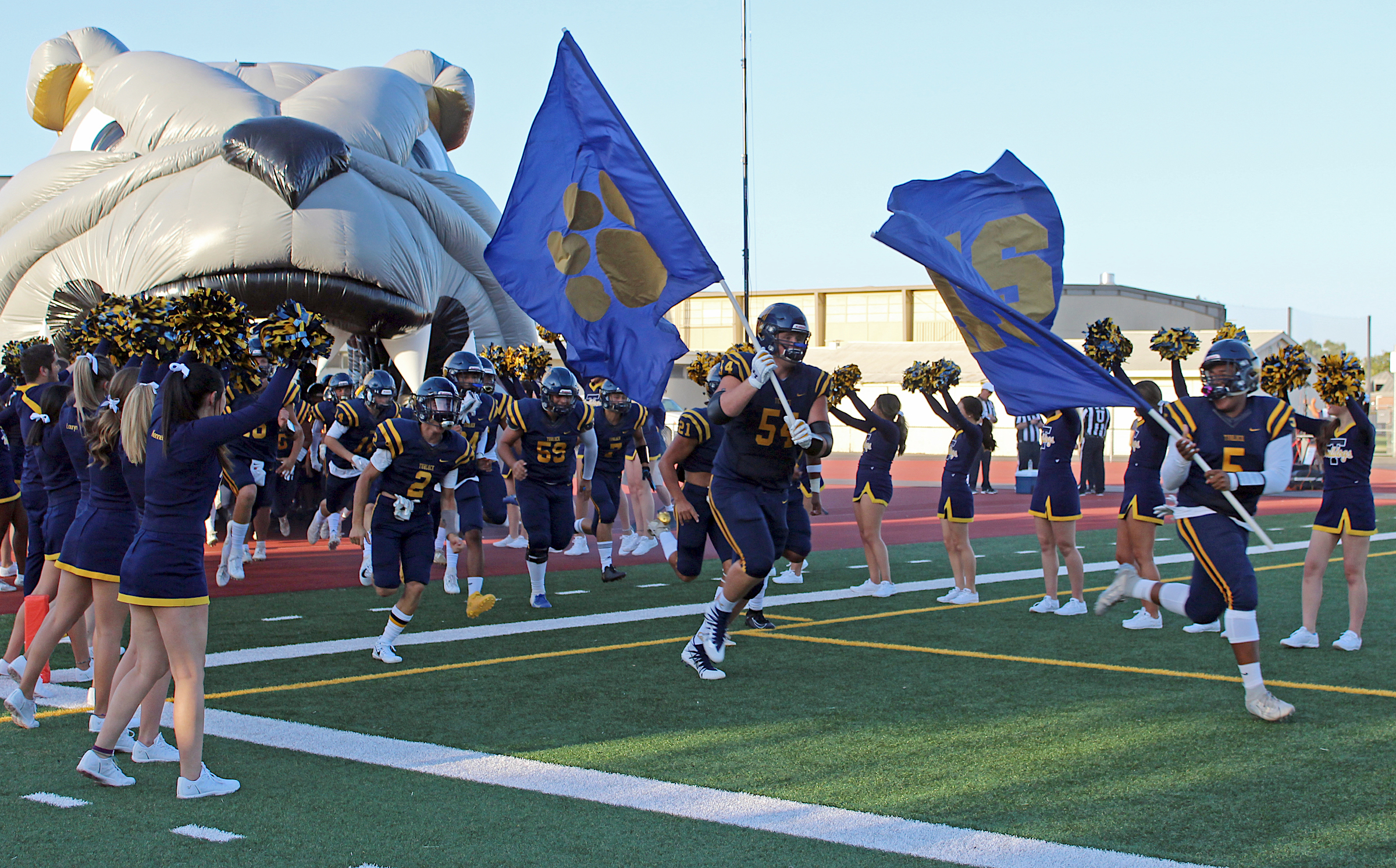 Everett Johnson (left) and Tamirr Bullock lead the Turlock High football team onto the field before a season-opening 21-7 victory over Freedom on Aug. 23, 2019. (Samantha Schmidt)

Plant your flag: Turlock replaces Central at No. 1, but it wasn't the only shakeup

1. (2) Turlock (1-0): The Bulldogs ascend to the top ranking after a commanding and sometimes impressive 21-7 victory over Freedom, a two-time defending North Coast Section Division I finalist. Turlock’s defense is suffocating, especially against the run, and the offense can be explosive with first-year starter Brock Paslay, rising 6-foot-4 recruit Holden Baldwin and running back Anthony Frias. Friday: at Clayton Valley Charter.

‍2. (1) Central Catholic (0-1): Depleted and beaten up, Central Catholic couldn’t hold onto a lead in the final moments of Friday’s stunning season-opening loss to Clovis West. Fears about the Raiders’ depth were realized and it calls into question the team’s ability to navigate a thorny non-conference schedule. With De La Salle, Upland at St. Mary’s looming, 0-4 now seems like a distinct possibility for the region’s most decorated football team. Friday: vs. De La Salle.‍

3. (3) Manteca (1-0): The Buffaloes’ offense was as good as advertised in its opener against Lathrop, a former VOL foe. Matter of fact, they were better than “good.” Manteca scored on its first two offensive plays and Pacific-bound talent Ryan Ward passed for 273 yards on only seven completions as the Buffaloes rolled to a 64-6 victory. Friday: at Downey.‍

‍4. (4) Oakdale (1-0): The Mustangs’ Wing-T offense took a quarter to get revved up, but once it found its speed and rhythm there was little rival Sonora could do to slow the assault. Oakdale scored 34 unanswered points in the second quarter. Zeke Saffar and Leo Ayala combined for 229 yards and three touchdowns. Friday: vs. Liberty (Brentwood).‍

6. (6) Downey (1-0): One season after combining for five touchdowns with former Knights quarterback Beau Green, Bryce Gouker proved he could shoulder the load. The senior gunslinger highlighted a 49-30 win over East Union with five scoring throws, and low-to-the-ground running back Robert Rivera, one of the region’s best backs no one is talking about, provided balance as Downey proved ready for its home opener against … Friday: Manteca.‍

7. (7) Patterson (1-0): Junior running back Jordan Imada rushed for 187 yards and two touchdowns on only 12 carries and the Tigers’ defense collected three interceptions, one sack and a fumble recovery in a convincing 48-14 win over Tokay. The caliber of opponent grows exponentially on ...  Friday: vs. Capital Christian.‍

8. (8) Gregori (0-1): Beset by penalties and turnovers, the Jaguars dropped their season opener to Buhach Colony, arguably one of the top teams in the region. The silver lining in defeat: After yielding more than 300 rushing yards last fall, Gregori didn’t surrender its first points to the Thunder’s potent Fly offense until there were 31 seconds left. Friday: vs. Merced.‍

9. (nr) Merced (1-0): The Bears’ defense pitched a shutout in a 13-7 victory over Del Campo. The only touchdown allowed was a pick-six by sophomore Seth Scheidt, who threw four in all in a shaky debut. Running back Desmond Thompson, a returning 1,000-yard rusher, had a 39-yard touchdown on his first carry. Friday: at Gregori.‍

10. (9) Los Banos (0-1): Dos Palos scored the game-winning points with 26 seconds left in a rare Westside War victory over Los Banos, which has some concerns on defense. Offensively, the Tigers will be just fine. Wide receiver Landon Ramos had six catches for 134 yards and a touchdown and running back Justin Incaprera topped the 100-yard mark, too. Friday: at Hilmar.‍