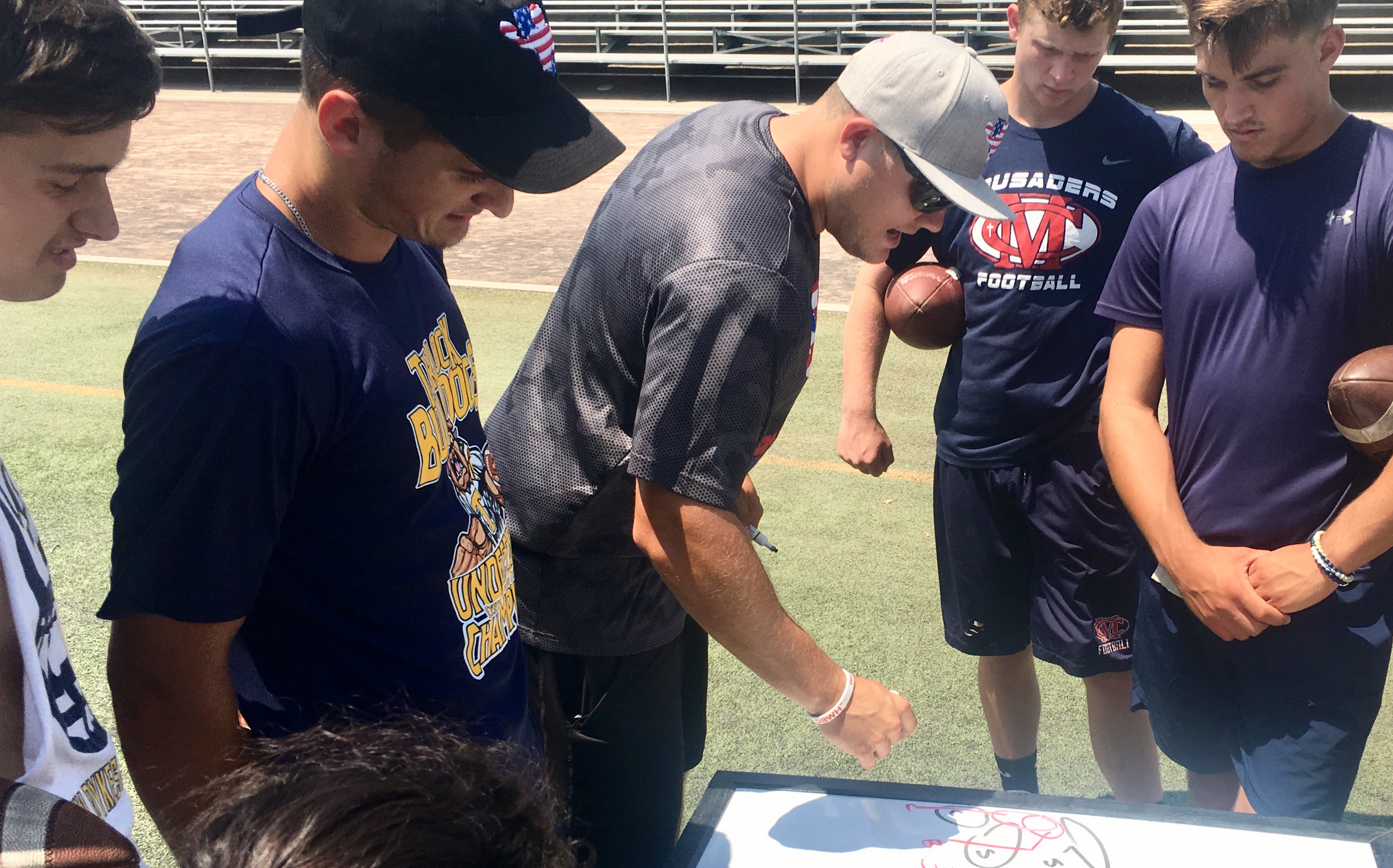 Play or Pass: Will 2018 be the Year of the QB in south Sac-Joaquin Section?

From Orestimba’s Tyler Vargas to Merced’s Dhameer Warren to Central Catholic’s Dawaiian McNeely, the southern half of the Sac-Joaquin Section has no shortage of freakishly athletic football players.

Every where you look there’s a kid that can run, catch and pursue with break-neck speed, and there are players that can hunt the football like it’s a fugitive of the law.

Despite all of this game-changing talent, though, the 2018 season may very well belong to those that manage the game. With experienced signal-callers setting the pace in every conference, this may be the Year of the Quarterback in the southern half of the Sac-Joaquin Section.

Here’s a look at the QBs battling for headlines and their own slice of history as the season gets underway:

Kyle Jackson and Dalton Durossette, Central Catholic: The most intriguing quarterback battle in the southern section unfolds on the practice field at Central Catholic. Kyle Jackson is the junior incumbent after starting seven games last fall. He was 6-1 as a starter for the Raiders with 452 yards and five touchdown passes, but suffered a season-ending knee injury in a last-second loss to Oakdale in Week 10. Some coaches and scouts believe he throws a Division I ball, but he has yet to lock up the starting spot because of the arrival of another with a Division I arm. Durossette’s future at the next level may be as a pitcher. He was recently named to the Area Code underclassmen game, plays for NorCal Valley, the region’s premier travel baseball team, and once threw a no-hitter for Ceres High as a freshman. He looks the part — tall, mobile with a big arm — but has little big game experience. He threw for 1,632 yards for a Ceres team that was winless in the Western Athletic Conference.

Jonah Kosakiewicz, Turlock: Kosakiewicz is a Bulldog bred for the spotlight. With a magnetic personality and unique skill set under center, Kosakiewicz has filled the void left by all-everything quarterback Danny Velasquez, a former two-time Central California Conference MVP and now a sophomore at Portland State. Kosakiewicz was named the CCC’s Offensive Player of the Year last fall after leading Turlock to its second straight league title. As the Bulldogs move into the newly-formed CCAL with the likes of Downey, arguably the most aggressive offense in the region, Kosakiewicz, a senior with an eye toward Cal Poly, may be asked to do more. He welcomes the chance to showcase his arm and accuracy. “I think this year we’re going to have to spread it out and throw more because of defenses the  Modesto teams have,” he said. “Downey throws the ball 30 to 40 times. So I think the coaches are open to the idea, more welcoming to it, and I think they have more confidence in me.”

Treyton Fair, Pitman: In the midst of a 5-5, non-playoff season, Fair’s development was a silver lining for the Pride. According to a team historian, Fair racked up the most passing yards by a Pitman quarterback since Colin Kaepernick, who went on to star for the University of Nevada-Reno and the San Francisco 49ers. Fair threw for 1,159 yards and 10 touchdowns. Pitman will need him to take the next step in his development this fall if it hopes to compete in the CCAL and return to the Sac-Joaquin Section postseason. Fair competed less than 50 percent of his passes, threw seven interceptions and was sacked 19 times for minus-104 yards.

Dhameer Warren, Merced: A three-year varsity starter, Warren is one of the most explosive quarterbacks in the southern section. He is a true dual-threat with 2,293 passing yards and 891 more on the ground in 23 career games for Rob Scheidt, whose gold-plated career has been guided by memorable run-and-gun quarterbacks like Logan Todd (though he played his senior year with a shredded knee) and Allen Huddleston. As electric as Warren is, he’s also a bit of a gambler. He has thrown for nearly as many interceptions (18) as touchdowns (25) and is looking to bounce back from a turbulent junior season. After completing nearly 70 percent of his passes as a sophomore, Warren’s percentage dropped by nearly 16 points last fall and he threw more interceptions (15) than TDs (14). If Merced is going to return to the top of the CCC, Warren must protect the football.

Ryan Daggett, Ripon: A gifted athlete, Daggett followed his breakout junior season on the gridiron with a Sac-Joaquin Section Division V championship and Masters berth in the 300-meter hurdles. In 2017, with the presence of senior standouts Michael Winters and Cameron Gamino, the TVL’s offensive and defensive players of the year, Daggett was allowed to develop and pick his spots in coach Chris Musseman's offense. Daggett passed for 1,115 yards and 15 touchdowns. He also rushed for five scores en route to all-league first-team honors. Daggett was a centerpiece in Ripon’s biggest win, a 28-13 knockout of No. 2 Calaveras in the opening round of the Division V playoffs. Daggett completed eight of his 10 passes and accounted for two touchdowns, including a 55-yard burst.

Hayden Sauser, Modesto Christian: Sauser was a mid-season revelation for the Crusaders, a player who changed the team’s stars the moment he took control of the huddle. Modesto Christian lost four of its first five games, but rebounded with Sauser at the controls. The Crusaders closed the season on a tear, carving out a split of the Trans-Valley League title and rolling to the Sac-Joaquin Section Division VI final. Sauser, who threw for nearly 1,000 yards in limited duty, watched that game in street clothes, though, after suffering a season-ending injury. He said it was a painful but necessary step in his development as a team leader. “I say I grew in a lot of places in that season of time,” Sauser said, “just having to become the best cheerleader for my team, more enthusiastic and more positive for my guys. Even though, it didn’t go the way I wanted or my team wanted, you always have to have a level head and stay positive. It will be an exciting season (with a) chance to bounce back.”

Xavier Rodriguez, Davis: If Rodriguez and his fleet of wide receivers stay healthy, the Tim Garcia disciple could throw for more than 3,000 yards. Now in his second year in a pass-first system, Rodriguez has the trust of his coach — Garcia, a former quarterback, is a Hall of Fame inductee at Modesto Junior College and the University of Mary — and the body of work to make you think it’s possible. In limited duty last fall, Rodriguez threw for 1,923 yards and 10 touchdowns. As the Spartans transition into the Western Athletic Conference, Rodriguez has a chance to not only lead Davis to a rare league title and postseason berth, but he could also be a league MVP.

Jake Gookin, Sonora: Gookin led the Wildcats in rushing and was named to the all-Mother Lode League first team. His mastery of the offense, coupled with the return of impact players like Evan Bearden, the league’s defensive player of the year, and running back C.J. Castleman, one of the fastest sprinters in the southern section, makes the Wildcats prohibitive favorites in the Mother Lode and Sac-Joaquin Section. The question framing Gookin's senior season is: Can he duplicate his brother Nate’s feat in 2015, when, as an undersized but quick defensive lineman, he helped lead Sonora to a D-V title and a berth in a CIF State Northern California regional bowl?

Ryan Kraft, Bret Harte: One of the most decorated athletes in the Mother Lode, Kraft is entering his third season at the helm of the Bret Harte offense. He accounted for 2,055 all-purpose yards last fall, including 1,467 through the air and another 588 on the ground. Kraft is No. 45 on the Front Row’s list of the top-50 returning high school football players, but is his experience, athleticism and playmaking ability enough to propel the Bullfrogs past Sonora, Calaveras and Amador in the chase for the Mother Lode League title?

Jacob Bettencourt, Orestimba: Bettencourt was named the Southern League’s Offensive Player of the Year last fall after leading the conference in virtually every major statistical category at the position. He was tops in completion percentage (66.5 percent), touchdown passes (28) and QB rating (128.2), while throwing for 2,170 yards, second only to Mariposa’s Colton Weidner. Bettencourt is back for the three-time defending league champions and so is his top target, all-league wide receiver Tyler Vargas. Bettencourt spent his summer refining his mechanics with another Orestimba High product, former Eastern Washington backup quarterback Greg Panelli of the Panelli Passing Academy. “I feel like I’ve improved on the run a little more this year,” Bettencourt said. “I wasn’t too bad at it last year, but I'm just getting more throws down and more power behind my balls.”

Michael Vivo, Waterford: Vivo is a three-year varsity player for the Wildcats and a top talent in the Southern League, but can he take the reins and snap the program’s four-year playoff drought? Waterford certainly is making strides under third-year coach Lonnie Statzer, whose nine wins over the last two seasons match the win total by the two previous coaches from 2013-15. Vivo is regarded by his peers as one of the most dangerous players in the Southern League, a player with the ability to lineup anywhere on the field. However, the Wildcats’ success may come down to how he performs from under center.

Gunnar Selover, Big Valley Christian: Selover credits second-year coach Brian Berkefeld with transforming the small-school team into a program. "Brick by brick," Selover said of the team's theme and Berkefeld's calculated steps. It’s hard to argue the results. The Lions won a school record nine games to start the season, and if it weren’t for untimely injuries to star running back Javyn Drobnick and his offensive linemen, Big Valley Christian believes it could have run the table in the CCAA and Sac-Joaquin Section playoffs. With Selover and Drobnick back, the Lions will have one of the most formidable backfields at the small-school level. Selover threw for 14 touchdowns and 927 yards, but he completed less than 50 percent of his passes.