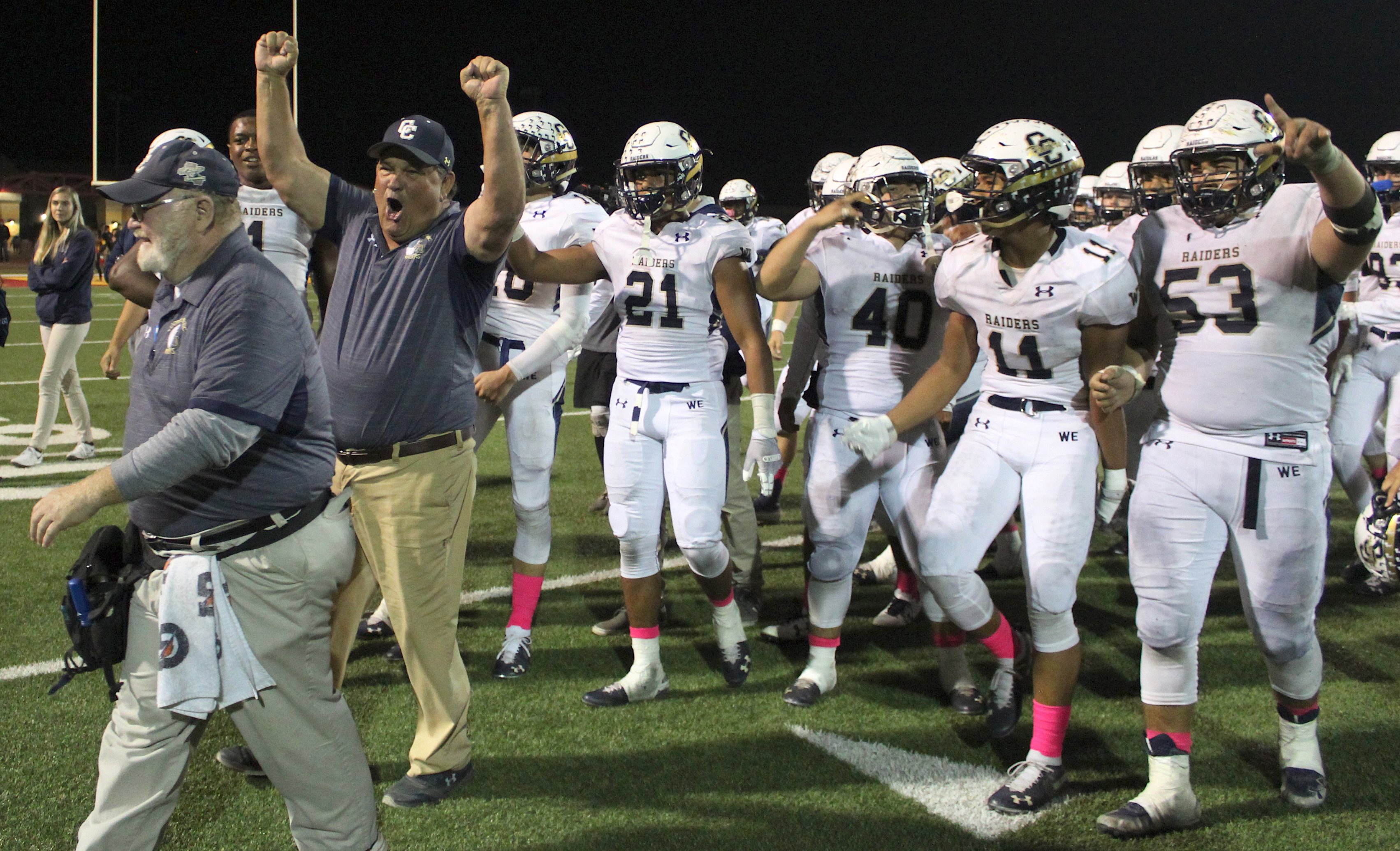 Plenty of movement in final large-school football poll, except at Nos. 1 and 2

1. (1) Central Catholic (9-1, 6-0): The Raiders scored five touchdowns on eight plays in the second quarter as they turned a VOL title game with Oakdale into a rout. Next: Bye, D-II playoffs.

2. (2) Merced (10-0, 6-0): The Bears completed their perfect regular season with a 41-7 victory over rival Golden Valley. Four years after an 0-10 freshman campaign, the seniors etched their name in school history. Next: Bye, D-III playoffs.

3. (4) Turlock (7-3, 5-0): After taking their lumps early in the season, the Bulldogs, anchored by dual-threat QB Jonah Kosakiewicz and a generational defense, clinched the first-ever CCAL crown with a resounding Harvest Bowl victory. Next: vs. Cosumnes Oaks, D-I playoffs.

4. (5) Manteca (7-3, 5-1): The Buffaloes continued their run of dominance over crosstown rival East Union. With its eighth straight win in the series, Manteca also snapped the Lancers’ two-year postseason streak. Next: vs. Burbank, D-III playoffs.

5. (3) Pitman (9-1, 4-1): The Pride’s bid at a perfect season came apart at the seams in the Harvest Bowl loss. Pitman has been just shut out four times in school history and two of those defeats have come to rival Turlock. Next: vs. Davis of Yolo, D-I playoffs (Thursday).

6. (6) Downey (6-4, 3-2): The Knights distanced themselves from Modesto with 19 second-half points and will take momentum into the Sac-Joaquin Section postseason. Next: at Grant, D-II playoffs.

7. (8) Buhach Colony (8-2, 5-1): Youlas Dickson scored two touchdowns as the Thunder celebrated a Bloss Bowl victory over Atwater for the ninth time in 13 seasons. Next: vs. Ponderosa, D-III playoffs.

8. (7) Oakdale (7-3, 4-2): Sophomore Zeke Saffar was the lone bright spot in a blowout loss to top-ranked Central Catholic. Saffar rushed for 169 yards and two touchdowns, but a bulk of his yards came on two carries with the game well out of reach. Next: vs. Valley, D-IV playoffs.

9. (10) Los Banos (7-3, 6-1): In one of the season’s best postgame scenes, Los Banos coach Dustin Caropreso absorbed a Gatorade bath from his players and then a hug from his father Gary, who leapt into his arms following an upset victory over Pacheco, the WAC’s last unbeaten team. Next: vs. Orestimba, D-V playoffs.

10. (9) Pacheco (8-2, 6-1): One week after making history by clinching a share of its first league championship, Panthers coach David Snapp issued a response on social media to those calling for his job after an emotional loss to Los Banos. Next: vs. Sierra, D-IV playoffs.